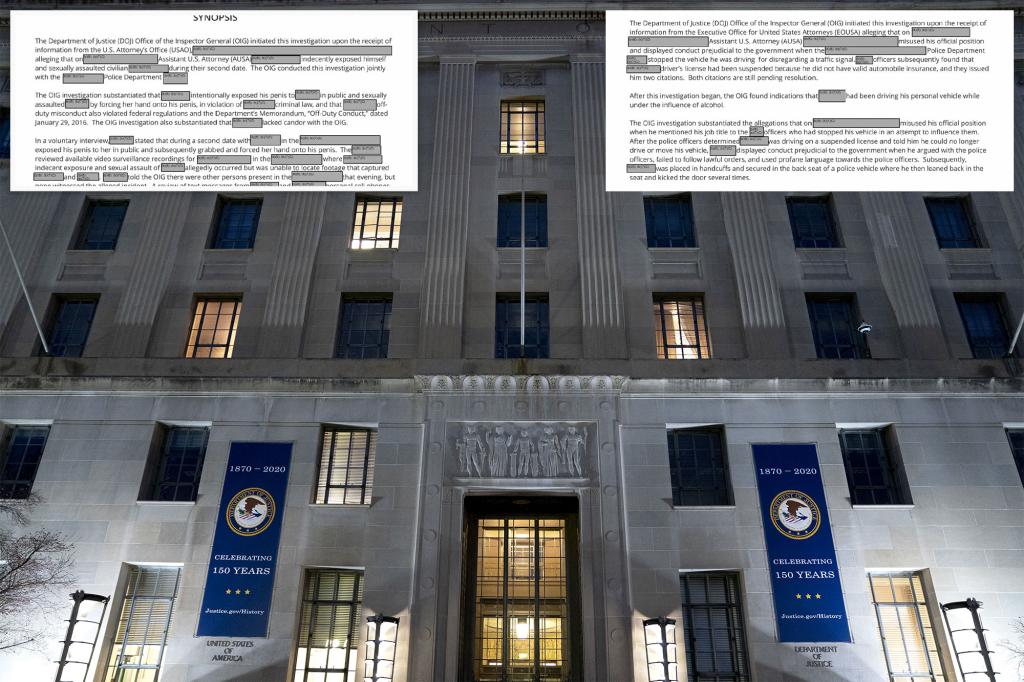 A federal prosecutor in Florida said “f–k you” to cops who stopped him for driving drunk – and another assistant US attorney in Texas exposed himself to a Tinder date, according to documents released Monday by the Justice Department’s official watchdog.

In the Florida incident, the unnamed assistant US attorney was stopped by local police for running a red light while driving home from a bar association Christmas party in the Miami area, according to an investigative report from the DOJ’s Office of Inspector General obtained through a FOIA request.

The cops determined the AUSA had a suspended license – and when they pressed him on the problem, he berated them and used his law enforcement position in an attempt to get out of trouble, according to the report.

“[Redacted] asked if they would really arrest an AUSA and challenged them to arrest him,” the report states.

“[Redacted] stated the officers have all the power but later they will not. [Redacted] said ‘fuck you’ to the officers, at which time he was placed in handcuffs,” it adds.

The belligerent prosecutor, who had downed a number of Michelob Ultra beers and wine that night, also dared the cops to call the chief of police and claimed to them that he was the most senior law enforcement official in the area.

When he was placed in a police car, the prosecutor “leaned back in the seat and kicked the door several times,” the report states.

OIG investigators determined the AUSA drove under the influence that night but did not refer the case to local prosecutors because the cops did not do a sobriety check.

The watchdog referred their findings to the Executive Office for United States Attorneys and DOJ’s Office of Professional Responsibility for “appropriate action,” according to the documents.

In the Texas incident, a separate Assistant US Attorney in the Dallas area broke a number of laws when he exposed his penis to a Tinder date and forced her to touch it, according to another OIG report released Monday.

The unnamed prosecutor met his Tinder date at a bar on an unspecified night after eating lamb pasta at a restaurant with a friend, according to the report.

He allegedly steered the conversation to public sex a number of times, during which the date told him stories “about public sex involving a pastor’s son in a movie theater, and about her visiting hot tubs in Taos, New Mexico,” the report states.

On a walk outside after, the prosecutor and the date “made out” – then he pulled his penis out and made her touch it, according to the report.

“At some point [redacted] dropped behind [redacted] huddled around her from behind, exposed his penis, and forced [redacted] to touch his penis with her hand,” the report states.

The woman recoiled and told him “that it was cold outside, and that she was not interested in having sex in public with him,” the report adds.

The prosecutor tried for a second time, “at which point she pulled on his exposed penis to hurt him and send him the message that she was not interested,” it goes on.

A local prosecutor declined to charge the unnamed assistant US attorney, and the OIG referred their findings to Executive Office for United States Attorneys and DOJ’s Office of Professional Responsibility.

Investigators from the OIG, who use the preponderance of the evidence standard, determined the prosecutor engaged in obscenity and sexual battery in the incident.

He also withheld information from investigators in interviews with the OIG, according to the report.