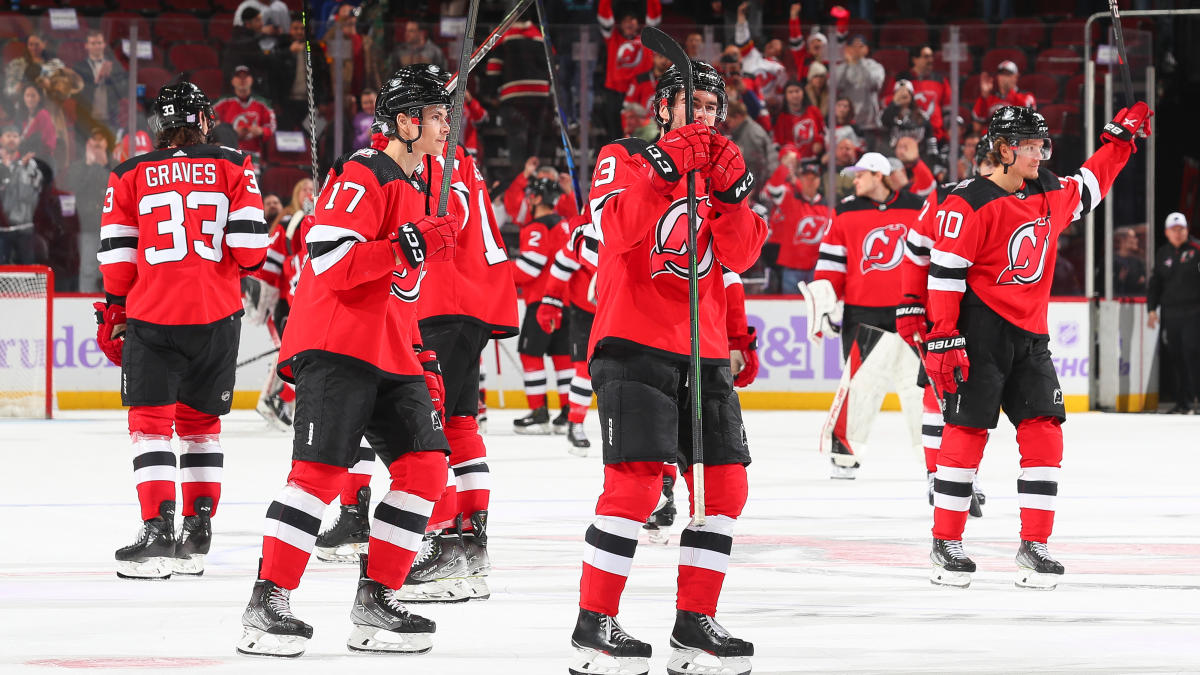 This heater may not be unprecedented, but it’s quickly approaching that territory.

With a win over the Oilers on Monday, the New Jersey Devils extended their winning streak to 13 games, tying them for the fifth-longest such run in NHL history and putting them only four games back of the all-time record.

A win streak of at least 13 has only been accomplished 10 other times, with the Panthers most-recently hitting that mark just last season before the rival Lightning put a stop to that. The Devils also reached the 13-consecutive-win mark during the 2000-01 season before bowing out in the Cup final after winning it all the year before.

Another dub over the depleted Maple Leafs on Wednesday night would put the Devils into a tie for fourth all-time and within striking distance of the 1992-93 Penguins‘ record mark of 17 consecutive wins. As New Jersey inches closer to the top spot, let’s take a look at where this run ranks historically and how those teams the Devils are chasing on the all-time list ended up finishing.

The back-to-back champion Penguins entered the season with a three-peat in their sights and looked like a juggernaut heading into the 1993 playoffs after ending the campaign unbeaten in 18 straight games including a 17-game win streak in the middle of that run.

That late-season scorcher may have emptied all the gas Pittsburgh had left, however, as the two-time champs — loaded with the likes of Mario Lemieux, Jaromir Jagr, Ron Francis, Larry Murphy and others — were shockingly upset by the New York Islanders in the second round that spring.

The second-longest win streak in NHL history belongs to … the, uhh, Columbus Blue Jackets? We’ll forgive you for not remembering the Jackets’ 16-game stretch of dominance from a few seasons ago because it’s honestly pretty hard to remember anything about that team ever.

This version of the Blue Jackets, coached by John Tortorella and backstopped by that year’s Vezina winner in Sergei Bobrovsky, essentially rode stingy defense and hot goaltending to a wild mid-season run before fizzling out in the first round to the Penguins in just five games.

The ’81-82 Islanders were the best of those early-80s dynasty teams and one of the greatest teams ever assembled, dominating from start to finish with a league-leading 54 regular season wins and 118 points over 80 games for the best campaign in franchise history.

After trucking everybody and posting a mid-season, 15-game win streak along the way, the Isles went on to capture their third of four straight Stanley Cups that spring.

The Pens make their second appearance in the top-five with their 14-game run in March of 2013. Pittsburgh, led by prime Crosby, Malkin, Letang and Fleury, rocked their competition all year long, finish tops in the East in regular season wins and points in the lockout-shortened campaign.

Like most of the squads on this list, the Penguins fell short of a championship that season — getting swept by the Bruins in the Eastern Conference final.

I mean, who could forget this legendary squad featuring the likes of Cooney Weiland, Dit Clapper and Dutch Gainor up front, Eddie Shore and Lionel Hitchman on the blue line and Tiny Thompson between the pipes.

Unfortunately, there was no championship for this upstart squad, either, as the Bruins eventually fell to the Canadiens in the Cup final.

Alex Ovechkin and Nick Backstrom were in peak form throughout this season for the Capitals, who rode their two star forwards, along with blue line offensive juggernaut Mike Green, to a ridiculous 54-win, 121-point regular season while easily capturing the President’s Trophy as the NHL’s top regular season squad.

This may have been another case of mid-season burnout, however, as the suffered arguably their most disappointing playoff defeat (among the many), falling in the first round to the eighth-place Canadiens.