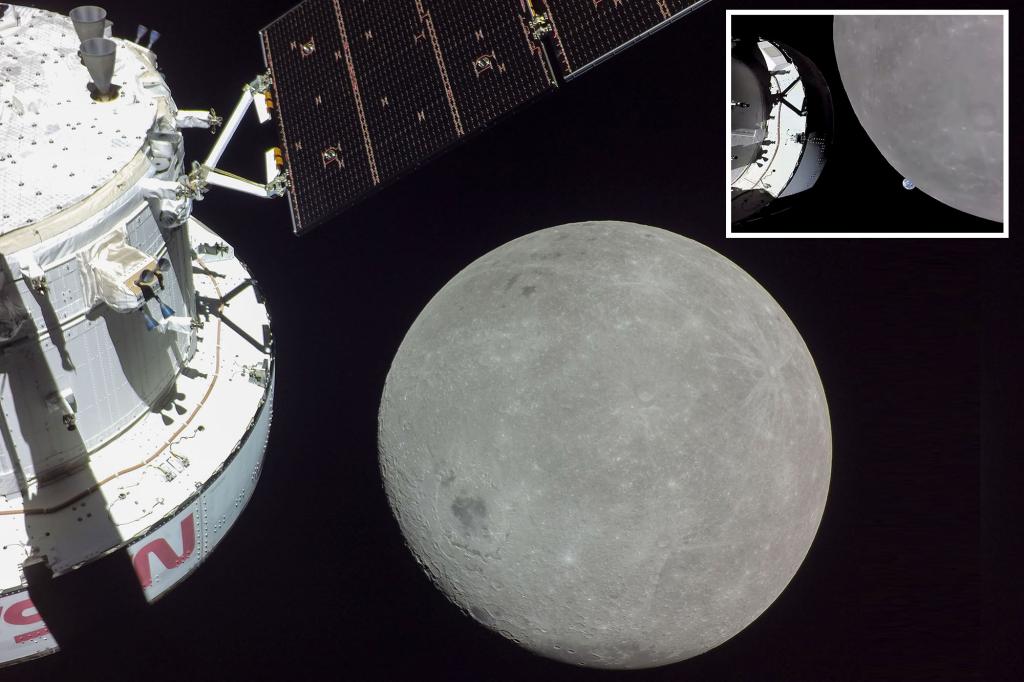 NASA’s Orion spacecraft made a critical outbound flyby burn to ensure it is placed into orbit around the moon on Monday and, along the way, shared incredible views of Earth and the backside of the moon.

The spacecraft launched on the Artemis 1 test flight from NASA’s Kennedy Space Center in Florida on Nov. 19, beginning a 240,000-journey to the moon.

Orion, built by Lockheed Martin for NASA, is equipped with cameras inside and outside the spacecraft. After launching on NASA’s Space Launch System rocket, Orion began sharing the views of Earth.

As Orion began its closest approach to the moon, NASA once again shared live views of the moon and Earth as seen from the spacecraft. Early Monday, Orion was more than 230,000 miles from home, quickly closing the gap to the moon. The images were provided by cameras on Orion’s solar arrays or the spacecraft’s “selfie sticks.”

Artemis 1 Mission Manager Mike Sarafin said later on Monday that NASA did not expect to be able to share live views from Orion as it approached the moon but after the success of the flyby the space agency is going to plan on regularly streaming views.

“We’ve got a lot more (images). We just need to get it off the spacecraft,” Sarafin said. “There is much more to come.”

NASA shared a “selfie” taken by Orion featuring the NASA worm logo and the moon taken during the closest approach.

Orion program manager Howard Hu said at NASA’s Johnson Space Center, everyone had “big smiles” seeing the images of the moon. Flight Director Judd Frieling said those in mission control were “giddy” with the views coming back from Orion.

At 6:44 a.m. CT, Orion’s orbital (OEMs) engines lit up for about 2 minutes to thrust the spacecraft into a distant retrograde orbit around the moon. Ahead of this burn, NASA lost signal with Orion for about 34 minutes when it reached the back side of the moon farthest from Earth.

The space agency re-acquired the spacecraft’s signal when Orion came out from behind the moon. Once again, Orion shared views of the “pale blue dot” of Earth from about 230,000 miles away.

“This is one of those days you’ve been thinking about and dreaming about for a long, long time,” NASA Flight Director Zebb Scoville said. “This morning, we just saw the Earth set behind the moon as we just brought the next human-rated vehicle behind the moon.”

At its closest approach Monday, Orion was 81 miles above the lunar surface, the closest it will get to the moon during the Artemis 1 mission.

The last time a human-rated spacecraft was this close to the moon was during the Apollo 17 mission in 1972, one of the Apollo landing sites Orion flew over on Monday.

Sarafin said Orion would capture video and photos of the Apollo landing sites during a Dec. 5 flyby and those images will be shared with the public.

If all goes well, Orion will fly more than 40,000 miles past the moon flying in orbit opposite the direction that the moon orbits Earth.

After this maneuver, Orion will enter retrograde orbit for about six days before beginning the spaceflight back to Earth.

Orion does not have a crew onboard for this maiden voyage but carries several manikins with sensors to help NASA understand what astronauts will experience on the Artemis II mission in less than two years. A small stuffed Snoopy wearing an orange flight suit could be seen floating about the Orion capsule with manikin Campos in the commander’s seat.  Ad 1 of 2Learn More

Only half a day into its journey, Orion is already sending back the first breathtaking views of our planet.

The final Artemis 1 mission milestone will happen on Dec. 11 when the spacecraft lands in the Pacific Ocean.