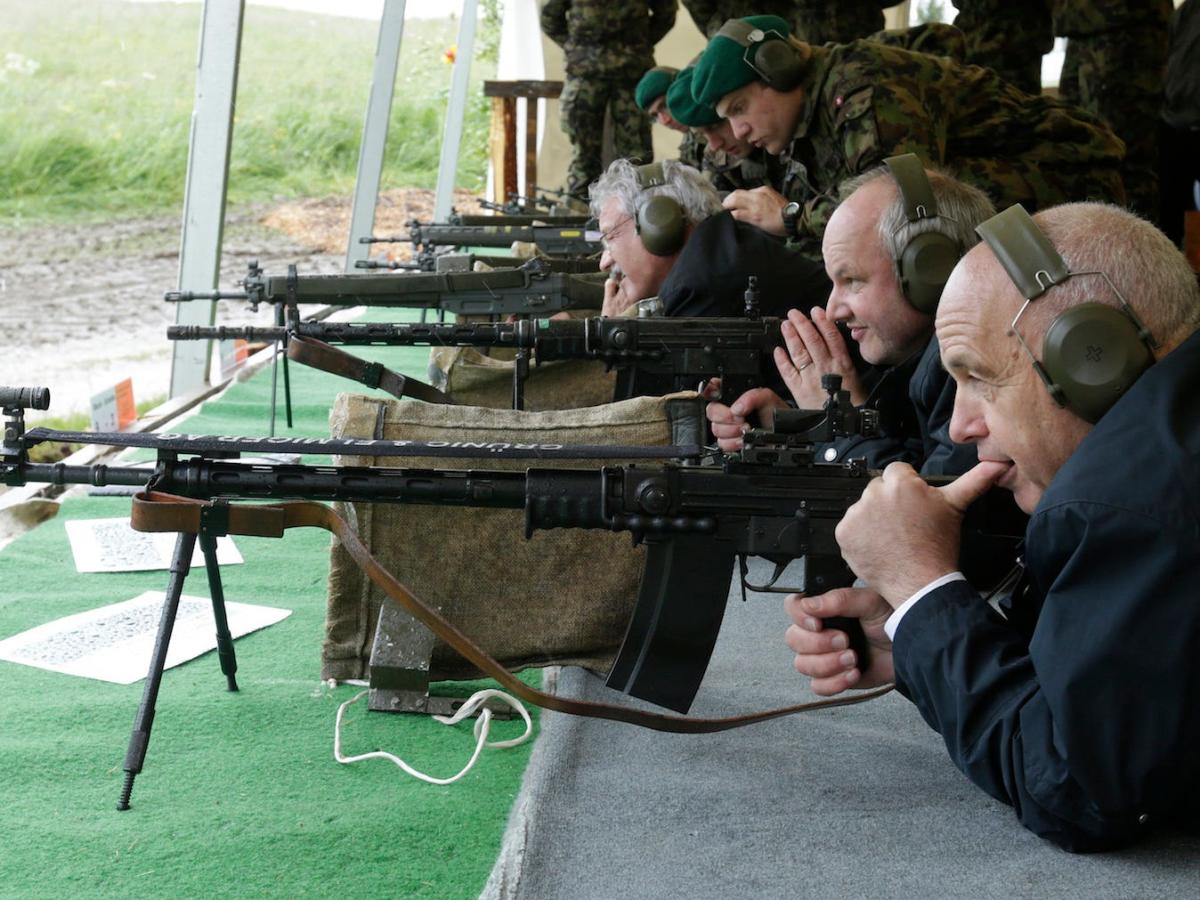 Switzerland hasn’t had a mass shooting since 2001, when a man stormed the local parliament in Zug, killing 14 people and then himself.

The country has about 2 million privately owned guns in a nation of 8.3 million people. In 2016, the country had 47 attempted homicides with firearms. The country’s overall murder rate is near zero.

The National Rifle Association often points to Switzerland to argue that more rules on gun ownership aren’t necessary. In 2016, the NRA said on its blog that the European country had one of the lowest murder rates in the world while still having millions of privately owned guns and a few hunting weapons that don’t even require a permit.

But the Swiss have some specific rules and regulations for gun use.

Insider took a look at the country’s past with guns to see why it has lower rates of gun violence than the US, where after a mass shooting that killed 5 and injured 25 at an LGBTQ+ nightclub in Colorado, gun-death rates are now at their highest in more than 20 years, and the leading cause of death for children and adolescents.

Switzerland is obsessed with getting shooting right. Every year, it holds a shooting contest for kids aged 13 to 17.

Zurich’s Knabenschiessen is a traditional annual festival that dates back to the 1600s.

Though the word roughly translates to “boys shooting” and the competition used to be only boys, teenage girls have been allowed in since 1991.

Kids in the country flock to the competition every September to compete in target shooting using Swiss army-service rifles. They’re proud to show off how well they can shoot.

The competition values accuracy above all else, and officials crown a Schutzenkonig — a king or queen of marksmen — based on results.

Having an armed citizenry helped keep the Swiss neutral for more than 200 years.

The Swiss stance is one of “armed neutrality.”

Switzerland hasn’t taken part in any international armed conflict since 1815, but some Swiss soldiers help with peacekeeping missions around the world.

Many Swiss see gun ownership as part of a patriotic duty to protect their homeland.

Most Swiss men are required to learn how to use a gun.

Unlike the US, Switzerland has mandatory military service for men.

The government gives all men between the ages of 18 and 34 deemed “fit for service” a pistol or a rifle and training on how to use them.

After they’ve finished their service, the men can typically buy and keep their service weapons, but they have to get a permit for them.

In recent years, the Swiss government has voted to reduce the size of the country’s armed forces.

Switzerland’s borders are basically designed to blow up on command, with at least 3,000 demolition points on bridges, roads, rails, and tunnels around the landlocked European country.

“Near the German border of Switzerland, every railroad and highway tunnel has been prepared to pinch shut explosively. Nearby mountains have been made so porous that whole divisions can fit inside them.”

Roughly a quarter of the gun-toting Swiss use their weapons for military or police duty.

In 2000, more than 25% of Swiss gun owners said they kept their weapon for military or police duty, while less than 5% of Americans said the same.

In addition to the militia’s arms, the country has about 2 million privately owned guns — a figure that has been plummeting over the past decade.

The Swiss government has estimated that about half of the privately owned guns in the country are former service rifles. But there are signs the Swiss gun-to-human ratio is dwindling.

In 2007, the Small Arms Survey found that Switzerland had the third-highest ratio of civilian firearms per 100 residents (46), outdone by only the US (89) and Yemen (55).

But it seems that figure has dropped over the past decade. The University of Sydney now estimates that there’s about one civilian gun for every three Swiss people.

Swiss authorities decide on a local level whether to give people gun permits. They also keep a log of everyone who owns a gun in their region — known as a canton — though hunting rifles and some semiautomatic long arms are exempt from the permit requirement.

Cantonal police don’t take their duty doling out gun licenses lightly. They might consult a psychiatrist or talk with authorities in other cantons where a prospective gun buyer has lived to vet the person.

Swiss laws are designed to prevent anyone who’s violent or incompetent from owning a gun.

People who’ve been convicted of a crime or have an alcohol or drug addiction aren’t allowed to buy guns in Switzerland.

The law also states that anyone who “expresses a violent or dangerous attitude” won’t be permitted to own a gun.

Gun owners who want to carry their weapon for “defensive purposes” also have to prove they can properly load, unload, and shoot their weapon and must pass a test to get a license.

Switzerland is also one of the richest, healthiest, and, by some measures, happiest countries in the world.

In their 2019 World Happiness Report, the UN ranked Switzerland sixth.

The Swiss have been consistently near the top of this list. In 2017, when the UN ranked Switzerland fourth overall among the world’s nations, the report authors noted that the country tends to do well on “all the main factors found to support happiness: caring, freedom, generosity, honesty, health, income, and good governance.”

Meanwhile, according to the report, happiness has taken a dive over the past decade in the US.

The report authors cite “declining social support and increased corruption,” as well as addiction and depression for the fall.

The Swiss aren’t perfect when it comes to guns.

Switzerland still has one of the highest rates of gun violence in Europe, and suicides account for most gun deaths in the country.

Around the world, stronger gun laws have been linked to fewer gun deaths. That has been the case in Switzerland, too.

After hundreds of years of letting local cantons determine gun rules, Switzerland passed its first federal regulations on guns in 1999, after the country’s crime rate increased during the 1990s.

Since then, the government has added more provisions to keep the country on par with EU gun laws, and gun deaths — including suicides — have continued to drop.

As of 2015, the Swiss estimated that only about 11% of citizens kept their military-issued gun at home.

Most people aren’t allowed to carry their guns around in Switzerland.

Concealed-carry permits are tough to get in Switzerland, and most people who aren’t security workers or police officers don’t have one.

“We have guns at home, but they are kept for peaceful purposes,” Martin Killias, a professor of criminology at Zurich University, told the BBC in 2013. “There is no point taking the gun out of your home in Switzerland because it is illegal to carry a gun in the street.”

That’s mostly true. Hunters and sports shooters are allowed to transport their guns only from their home to the firing range — they can’t just stop for coffee with their rifle.

Guns also cannot be loaded during transport to prevent them from accidentally firing in a place like Starbucks — something that has happened in the US at least twice.