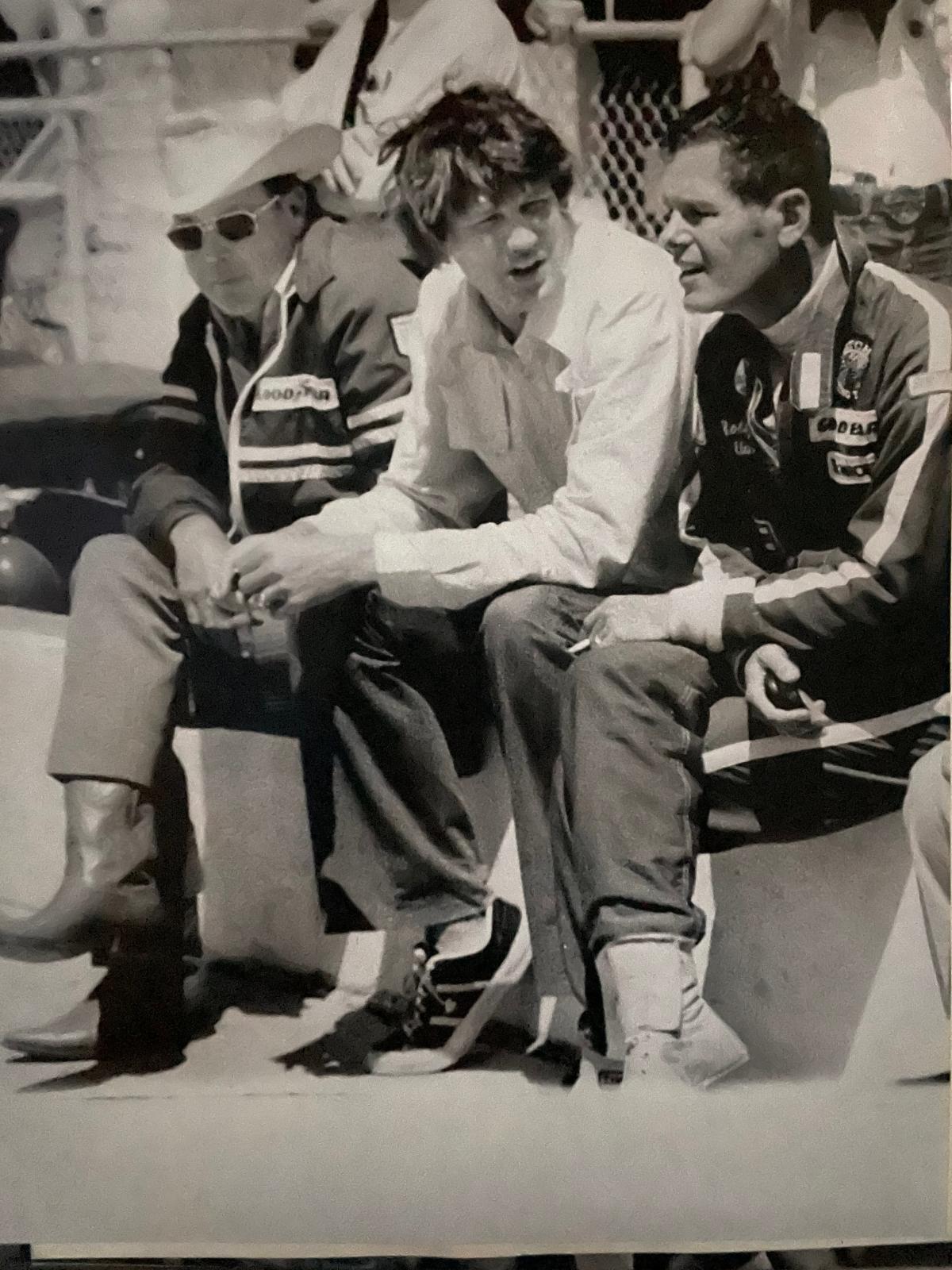 INDIANAPOLIS — “You’re embarrassing me,” Bob Netolicky says, laughing as he talks on the phone from his Texas home, trying to downplay this crazy story idea he’s been called to talk about.

The story is on “Neto,” the heartthrob of the Indiana Pacers, the player who had men cussing and women swooning, waiting outside the Indiana State Fairgrounds coliseum to get a glimpse, or more, of the 6-9 power forward who owned exotic pets, dressed in outlandish fashion and ran the hottest bar in town where the likes of James Garner hung out.

Yes, Netolicky will concede he dressed fashionably (“All those ABA guys did,” he says) and yes, he owned exotic pets, including an ocelot, lioness and a margay. Yes, he owned the now-demolished Indy bar Neto’s, where famous people who came to town for the Indianapolis 500 or any other big event would drink the night away.

“I’m not sure I remember all that,” Netolicky, 80, says. “I think some of this stuff, as time goes by, gets blown out of proportion. I’m not so sure I was a heartthrob. I don’t really remember women hanging out waiting for me.”

But newspaper articles remember. There are hundreds of stories from Netolicky’s eight years with the American Basketball Association Pacers in the late 1960s and early 1970s as the city’s “it-man.” The words are there in black and white in yellowed sports pages of the Indianapolis Star.

“He’s got the sexiest teeth in the ABA.”

“Some people even have dubbed the 28-year-old bachelor the Joe Namath of the Midwest.“

“Netolicky is a veritable sex symbol to many of Indiana’s female fans.”

Sorry “Neto,” the archives tell the story. And so Netolicky, reluctantly, agreed to tell it, too.

Netolicky was born in San Francisco in 1942 during World War II. His father, a surgeon, worked on a medical ship overseas during the war. His mother was a nurse by trade who became a stay-at-home mom taking care of Netolicky, his sister and his brother.

When the family moved to Cedar Rapids, Iowa, where Netolicky grew up, basketball wasn’t something that consumed his life. In fact, when he was a 5-11 freshman, Netolicky was cut from the basketball team and never played in high school.

Instead, Netolicky played at the YMCA, working out and battling on the court against college guys. When he graduated high school, he sat out a year and a half and kept playing ball. Eventually he and a few buddies decided to go down to Ellsworth Community College in Iowa Falls to try out for the team.

Word of what Netolicky did at that tryout spread to Drake University coach Maury John — word of this big, agile guy who no one could guard. John called Netolicky’s parents and offered their son a full ride.

Playing for Drake, Netolicky was an All-American selection and left as Drake’s all-time rebounding leader (717) and fifth all-time leading scorer, with 997 points.

And it was while in college that Netolicky’s reputation for being an exotic guy owning exotic pets was born.

First there was the margay, a small South American cat. “It was like a small leopard about twice the size of a house cat,” Netolicky said. He had grown up with domestic animals and loved them. He loved even more having wild animals in his midst.

Next, Netolicky became the owner of a lioness. It happened on a whim when his college roommate had an idea. “We can buy a baby lion cub for $100. Want to go half?” he asked Netolicky. It would be just like “Born Free,” the 1966 movie about a couple who raised Elsa, an orphaned lion cub. “Sure,” Netolicky told his roommate. “Let’s do it.”

The baby cub arrived and Netolicky named her Julie. “And she ended up getting real, real big,” Netolicky said. ” A full-grown mountain lion, 250 pounds.”

One time, Netolicky had Julie at a fraternity party. “We were just goofing around and, all of a sudden, she’s missing,” he said. The next day he got a phone call from the police. A neighbor boy had been mowing the lawn when Julie came walking out from under a tree.

“He about had a heart attack,” Netolicky said. The neighbors weren’t fans of lioness. Julie and Netolicky had to part ways.

And so came the ocelot. About the time Netolicky was ready to graduate from Drake, a friend of his who owned an exotic pet store asked him. “Why don’t you buy an ocelot?’ Hell, I didn’t know,” Netolicky said. So he said yes.

“He ordered it and it showed up, a little kitten, and bingo bango,” Netolicky said. He had an ocelot named Socrates, a fabulous spotted wild cat.

Netolicky had that cat when he left Drake and as he was drafted by the San Diego Rockets as the 18th overall pick in the 1967 NBA Draft, one selection behind Phil Jackson. Netolicky never played for San Diego, instead joining a new league called the ABA and playing for Slick Leonard and the Pacers.

Socrates quickly caught the attention of the Pacers’ fan base and IndyStar wrote about it. “He’s a fellow who never knows if he is going to be the host or the entree when he serves dinner for his pets,” wrote sports editor Bob Collins in his column Nov. 1, 1967.

Netolicky soon had to rehome Socrates and settle for a Black lab puppy.

But he didn’t need exotic pets to stand out in Indianapolis or anywhere else. Netolicky’s funky fashion and fast lifestyle had people talking about much more than his wild animals. And his play on the court quickly won fans over, at least most fans. There were the “cussers,” after all.

‘Most discussed and cussed player in ABA’

As a rookie, Netolicky led the Pacers in rebounding and field goal percentage (.504) and is one of only two Pacers in franchise history, the other Clark Kellogg, to average a double-double as a rookie.

But as his stellar career on the court played out, Netolicky’s life off the court created almost as much buzz.

“His zest for life, night and day, has made him one of the most discussed and cussed players in the American Basketball Association in general and in Indianapolis, in particular,” the IndyStar wrote Nov. 13, 1970. “A pension for exotic pets, beautiful women, fast expensive cars and bright lights has brought the 6-9 “Drake Dandy,” one of the kinder things he’s been called by some Pacers fans, a reputation.”

There were fans, male fans, who thought Netolicky cared more about his own good times than helping the Indiana Pacers win games. Or maybe they were just “jealous,” a newspaper story said.

After all, Netolicky had women talking. A lot. “Neto saw himself as the Joe Namath of Indianapolis,” said teammate Billy Keller in “Loose Balls,” a book about the ABA by Terry Pluto.

“If you’re single and you don’t wear a gray flannel suit, they say you’re different,” Netolicky said in 1971. “I wear mod clothes, enjoy good times and I like to party. If that’s a flake, then I’m a flake.”

Netolicky was referring to being the only player named four straight seasons to the All-Flake team in the ABA, an honor that wasn’t so much an honor but a jab at being less basketball player and more a “player.”

But Netolicky was a basketball player. He was a consistent double-double threat in the early years of the ABA, averaging 18 points and 10.2 rebounds while making the All-Star team his first four seasons. He won ABA championships in 1970 and 1972.

“I like to enjoy life and have a good time,” Netolicky said in 1970. “But I’ll tell you this. I enjoy winning as much as anybody and I think I hustle pretty good now. Most people talk and other people believe it. Things are written and then it’s hard to live them down.”

There were rumors that Netolicky was a “swinger” (IndyStar wrote about it at the time), the kind of rumors born from a player who is handsome, wears funky clothes and likes women and fast cars. Netolicky said he had a girlfriend most of the time he played for the Pacers.

There were rumors that he cared more about his business, the bar Neto’s he opened in the spring of 1970, than basketball.

“I talked over the idea of buying a bar with Slick one night last season and he OK’d it,” Netolicky said in 1970. “I think I’m playing better because of the bar. If I don’t play well, the business won’t do well.”

People knew they could come to Neto’s and see Pacers players, get up close and personal with them.

His bar, Netolicky said, was more than just a professional basketball player’s side gig. It was a place where everyone came together and felt welcome. Neto’s was in the Meadows shopping area at 38th Street and Keystone Avenue.

“It became the place to go after a game,” the IndyStar reported. “Most of the players from both teams would stop by and the place would be packed with fans who knew that the players would be there.”

Other famous people were at Neto’s, too. Besides James Garner, the crew of Apollo 12 with astronaut Pete Conrad, who had walked on the moon, once showed up at Neto’s. All the Indy 500 drivers hung out at Neto’s. Freddy Boom Boom Cannon once got up on the bar and sang.

And there was the night that Netolicky was at the Elvis Presley concert in Indianapolis when Neto’s house band leader got up on stage and announced that Netolicky had called. “Elvis will be over here in an hour.”

“I show up in my car (without Elvis) and 500 people are waiting to get in,” Netolicky said. “They aren’t here to see me, they are here to see Elvis, so they are all disappointed.”

But not really. They weren’t disappointed. Netolicky was, after all, the Elvis Presley of Indianapolis in those days — even if he doesn’t want to admit it.

When he retired in 1975, the last original Pacer, IndyStar wrote about Netolicky.

“He became an instant Hoosier hero,” the article read. “He was single, owned an ocelot, had long hair and a super soft hook shot.

“And he made the women swoon.”