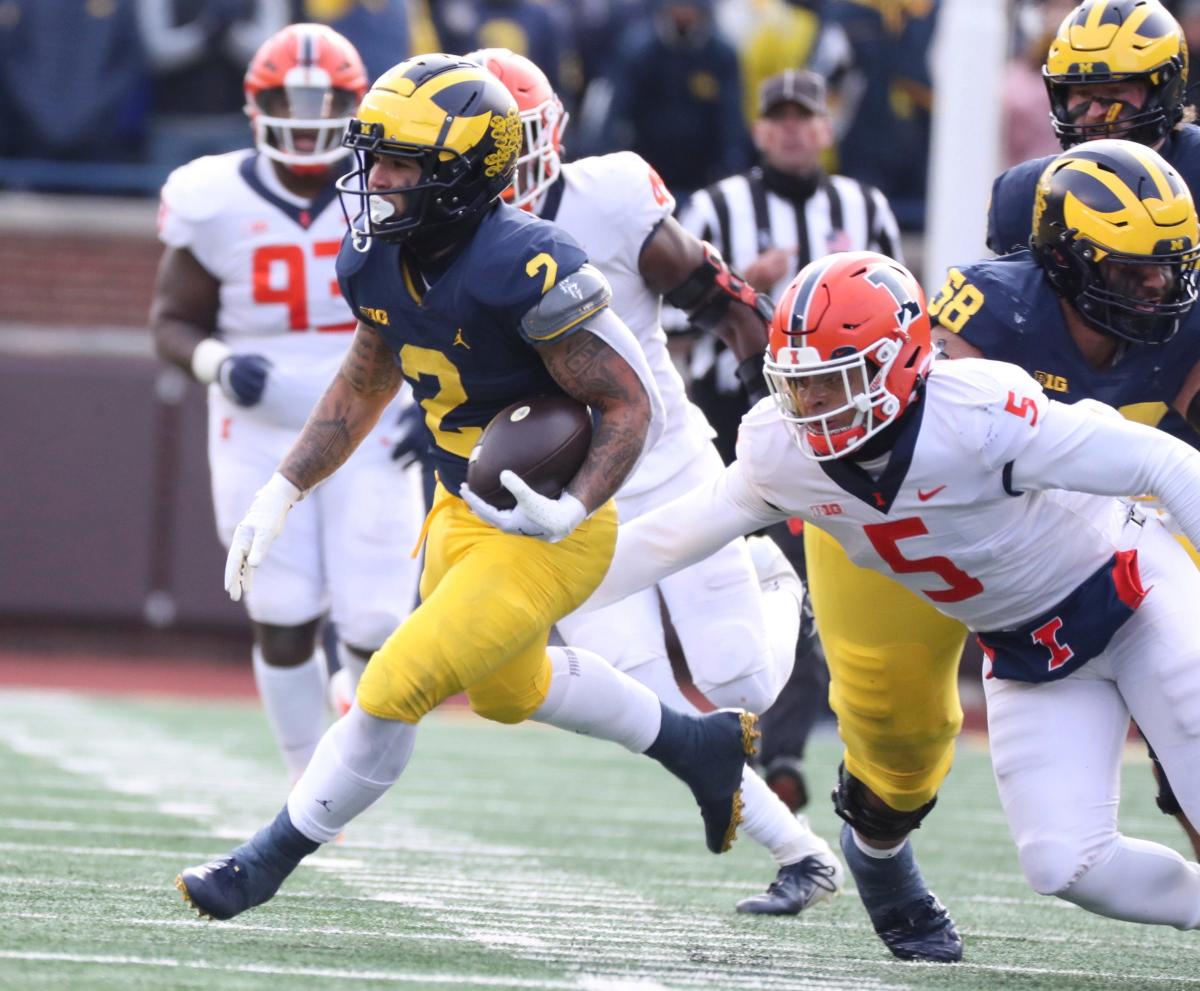 With more than a dozen cameras pointed his way and at least 50 reporters surrounding him in a semicircle Monday inside Schmebechler Hall, Michigan football coach Jim Harbaugh looked down at his notes, making sure he remembered the phrases he wanted to repeat.

He said No. 3 Michigan (11-0, 8-0 Big Ten) and No. 2 Ohio State (11-0, 8-0 Big Ten) are like two superheroes going at one another. Defensive tackle Mazi Smith took it one step further, saying Michigan is Batman — his favorite superhero — while OSU is like Ironman because they too are talented and got “gadgets and stuff up their sleeve for sure.”

Harbaugh, again, called his quarterback J.J. McCarthy “Iceman” after he led a game-winning drive Saturday, which Jake Moody capped with a victory-clinching 35-yard field goal with 9 seconds to play, to keep the perfect season alive.

But more than anything, he pointed out how during this Thanksgiving week, he feels blessed to be in position to enter a game of this magnitude with everything on the line.

“Winner takes the East, winner takes all right there,” Harbaugh said. “Strong opponent and it’s the kind of situation that gives you the opportunity to display how strong our team is. There’s no need to hate; be grateful for the opponent, it’s like superheroes, through a strong opponent you get to find out how strong you are.

This game is the first with both sides undefeated since 2006. It’s the first meeting in Columbus since 2018 after the Wolverines missed the 2020 finale during the COVID-19 shortened season because of an outbreak within the team.

But Michigan isn’t looking back at that game that didn’t happen, or even last year’s game that did, when the Wolverines won, 42-27, for their first victory over the Buckeyes in a decade.

“We’re looking to get another year, another win,” Smith said. “(The win) was important, it’s cool, but this is a different team doing different things. We can’t focus on the past, we can’t win this game looking back.”

Among the players with “Heisman habits” on the Buckeyes is leading quarterback C.J. Stroud, who has 2,991 passing yards, 35 touchdowns, four interceptions and a nation-leading 89.7 quarterback rating.

His top pass-catcher is Marvin Harrison Jr., who defensive back Mike Sainristil called one of the best receivers in college football. The Buckeyes also have a three-headed monster in the backfield: the banged-up Miyan Williams, TreVeyon Henderson and Dallan Hayden, who each has more than 500 rushing yards and five touchdowns.

The Wolverines still rank No. 1 in total defense (241.3 yards per game) but fell to No. 2 in rushing defense (79.5 yards per game) after allowing 148 on the ground last Saturday. Smith said the goal for the defense on Saturday is simple.

“The one thing I try to tell certain people when they ask (the message to the defense) you don’t want to ever be the reason,” Smith said. “You want to make sure you hold up your end of the bargain and make sure the people next to you hold up theirs.

“If everybody does that, we’ll come out happy with what we did.”

Michigan running back and Heisman candidate Blake Corum — who has 1,457 rushing yards and 19 total touchdowns — ran 18 times for 108 yards and a score against Illinois, but left late in the first half. He injured his knee and played just one snap in the second half before leaving the game for good.

Donovan Edwards, Corum’s backup, played two snaps on the first series the week prior against Nebraska, but sat the rest of the game and was not in uniform vs. Illinois with an undisclosed injury.

While Harbaugh said he had “no update” on the health status of Corum, Edwards, tight end Luke Schoonmaker or defensive end Mike Morris, offensive tackle Ryan Hayes seemed to imply the team may have to go without the star tailback.

“I think in a game like this, winning the line of scrimmage, winning rushing totals is always a huge factor in the game for us,” Hayes said. “(Corum) is a great player but I think everyone else is just going to step up with him out and I think we’re up for the challenge.”

Hayes said no matter which tailbacks are available, he doesn’t see the offense changing its identity as a run-first attack, but added he has every confidence in McCarthy to get the job done should the team need to throw the ball more.

There’s no point in changing the identity now.

“Keeping track of them, there’s things we do at practice to prepare for them,” Harbaugh said. “We know Ohio State’s our toughest competition. This will be our toughest test to date.”