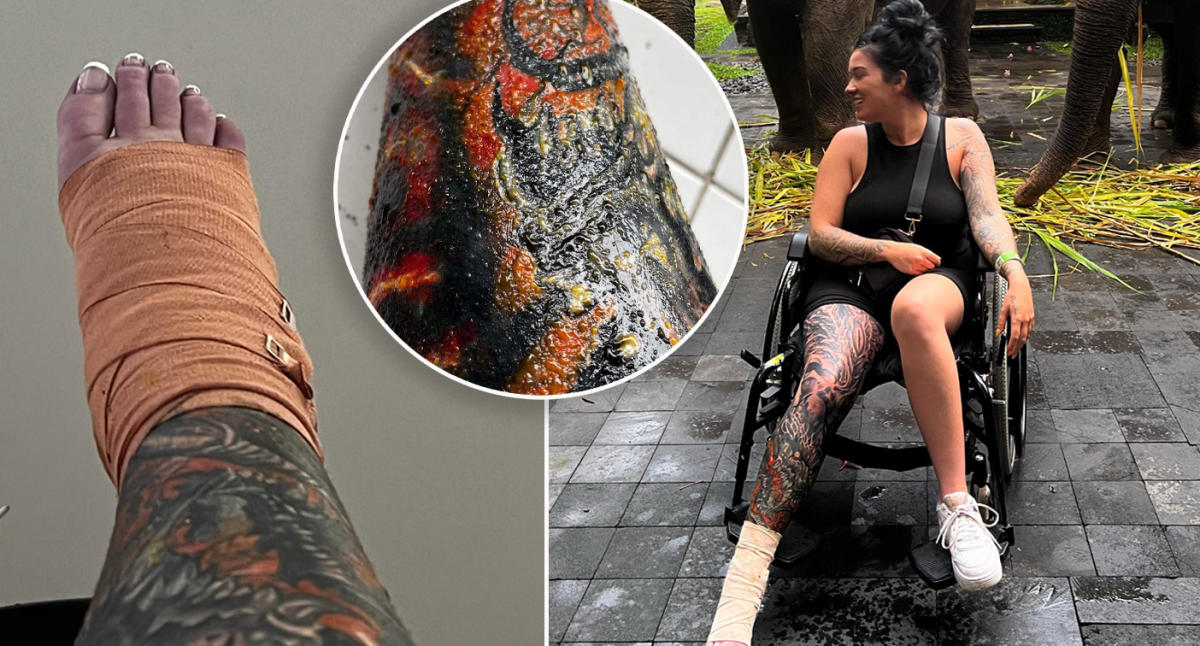 An Aussie tourist in Bali has detailed her $5000 ordeal after slipping and falling while walking on holiday — and shared how a last-minute decision saved her thousands when she was forced to fly straight home.

Kelsey Foster, 28, went viral last week when she hit back at critics who mocked her outfit during an orphanage visit, but days later, she found herself in a Balinese hospital with “excruciating pain”.

Ms Foster from Newcastle in NSW told Yahoo News Australia she has “a long road to recovery” and is now at home “undergoing lots of medical treatment”. At first, she thought she’d sprained her ankle so proceeded with a 12-hour pre-arranged leg tattoo in Bali. Little did she know she had “severe trauma” on her ankle and leg, and in the days that followed her new tattoo became infected.

“I have seeping open wounds on my leg that are now puss riddled. I am super uncomfortable and hurting it’s starting to affect me mentally,” she said on Facebook. “I’m def (sic) not doing great, feeling like a hot mess. Legs (sic) going through a lot of trauma, I am exhausted.”

Ms Foster was eventually told she had a torn ligament in her ankle and a large fracture on the outside of her foot — but only after returning home to Australia. While in Bali, she continued walking on her foot for four days, not realising how bad her injury was. Ms Foster shared photos online which showed immense swelling, and later a horrible infection. She was forced to wear a moon boot to help with her recovery but that was “rubbing directly on the fresh tattoo,” she told Yahoo News.

“My ankle is badly hurt and my body’s under extreme trauma so the tattoo isn’t healing causing infection,” she explained. She insisted there was no issue with her tattoo and “it was 100% done perfect and clean [and] sterile,” she said.

Ms Foster was forced to fly back home, which she arranged through her travel insurance. She said if not for that she would be facing a $5,000 bill. “Please get travel insurance. Honestly, I wasn’t going to and did last minute,” she said on Facebook. “I got emergency flown home business class back to Australia the tickets alone for it were over $4000 + over $1000 in meds and scans for me in Indonesia.” She told Yahoo she never thought she’d need it for an injury, and got it because “I was worried about my bags being lost”.

Now, doctors have apparently told Ms Foster she can’t have painkillers because they fear she might have Deep vein thrombosis (DVT) and is awaiting scans. “My body is simply exhausted from the amount of pain I am enduring,” she said. “The worst part about this pain is being told I can’t take painkillers because it’ll mask the potential outcome I could have blood clots. Sitting in excruciating pain is debilitating.”

She said she’ll be off her foot for several months while the fracture and infection heal.