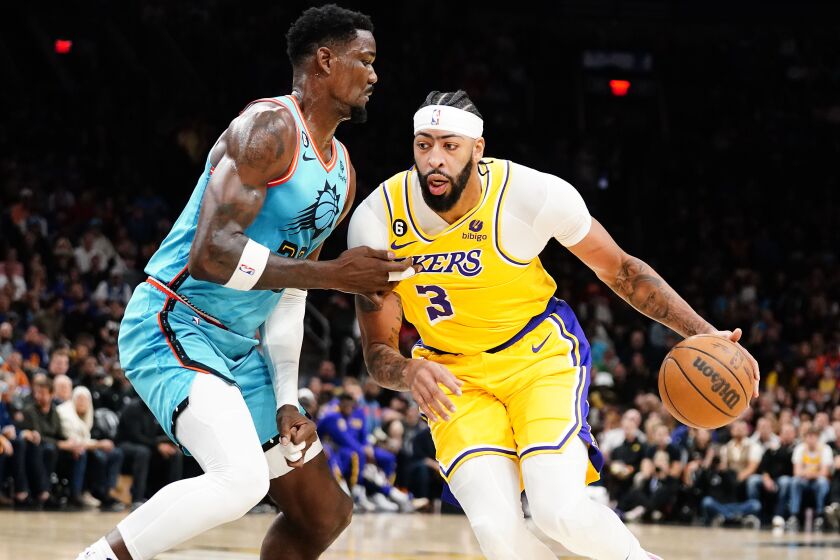 But there’s also the problem — Davis awkwardly getting his left arm tangled around Devin Booker’s head and hitting the court, needing a timeout to make his way back to his feet and to the Lakers’ bench.

Tuesday night in Phoenix, Davis was able to stay in the game, grabbing at his left elbow and repeatedly trying to squeeze feeling into his left hand.

It was a reminder of the gamble the Lakers took more than three years ago when they dealt the future for Davis — a bet that’s paid off with an NBA championship and offset with too many moments such as the one in the first half Tuesday against the Suns.

Davis alone wasn’t enough in a 115-105 loss to the Suns, the Lakers ice cold from three and again playing without LeBron James. But Davis still was plenty — 37 points, 21 rebounds, five blocks and five steals — continuing a run of maybe his best play since the Lakers dealt for him.

Tuesday, Davis became the first player in NBA history to score at least 35 points, grab 20 rebounds, have five blocks and five steals since the league started recording blocks and steals.

“He’s one of a kind,” Russell Westbrook said. “Always been that way, able to imprint his game in many ways.”

It was Davis’ fourth straight game with at least 30 and his fifth straight double-double.

He was great; the injury, even briefly, threatened that.

“I don’t know if I came down on his shoulder or something … just lost feeling in my arm, my fingers and my hand,” Davis said. “… My left hand, didn’t really need it much tonight.

The game seemed decided when Patrick Beverley made his impression truly felt as a Laker, running into and shoving Deandre Ayton when Ayton was standing over Austin Reaves, who was down after getting hit in the face by Booker.

Beverley knocked over Ayton, tripping him over Reaves.

“We’ve got each other’s back,” Davis said.

Beverley said he was unprofessional in his reaction and called it a “very unfortunate” incident, but he didn’t like Ayton and Booker “mean-mugging” Reaves.

“I love it, personally,” Westbrook said.

Incident aside, the Lakers didn’t get enough around Davis, with Beverley and Troy Brown Jr. — two of Darvin Ham’s starters — combining to miss all seven of their shots while scoring no points. Beverley did grab 10 rebounds before being kicked out of the game.

The Lakers, who had been over 30% in each of their last six games from three-point range, had their worst shooting night from deep in a month, making only four of 22 (18.2%).

They survived in the game because of Davis, 24 points from Lonnie Walker and 21 from Westbrook and because the team made 29 of 35 from the free-throw line.

The Lakers limited the Suns to five free-throw attempts.

The Lakers missed James for the fifth straight game since he was injured late in a loss to the Clippers. And though he could return when the Lakers play in San Antonio on Friday after Thanksgiving, Ham wasn’t committal.

“It’s been day to day,” Ham said. “He’s been able to get in the weight room and continuing the strengthening process. But just day to day. I told him today, when we get to a place where we feel comfortable going out there, we’ll get there. The team, again, we have additional bodies back in Dennis [Schroder] and Thomas [Bryant], so that’s helped. And we’re in a good rhythm right now so there’s no rush. There’s no panic mode.”

When asked about James returning, Ham declined to say.

“Circumstances change,” Ham said pregame. “Knock on wood … it is an NBA season and again, we don’t want to get too far ahead of ourselves in how we plan things out.”

Phoenix, which was without Chris Paul, got 25 points from Booker and 25 from Mikal Bridges.