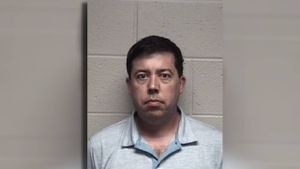 Police are looking for Richard Alana Williams, 41, who was supposed to return his son, Adler Williams to his mother on Tuesday at 6 p.m. However, Richard did not do so.

According to police, Richard has not returned Adler and they believe he took the child to Florida, which is outside of their court-ordered custody agreement, officials said.

Police issued an arrest warrant for interference with custody, and more charges will be brought if Richard and Adler are located out of state. Richard was last known to be driving a silver 2017 Ford Expedition, tag number PHT5994.

He may be headed toward Florida, police believe. Anyone with information on Richard’s whereabouts is asked to contact CPD.