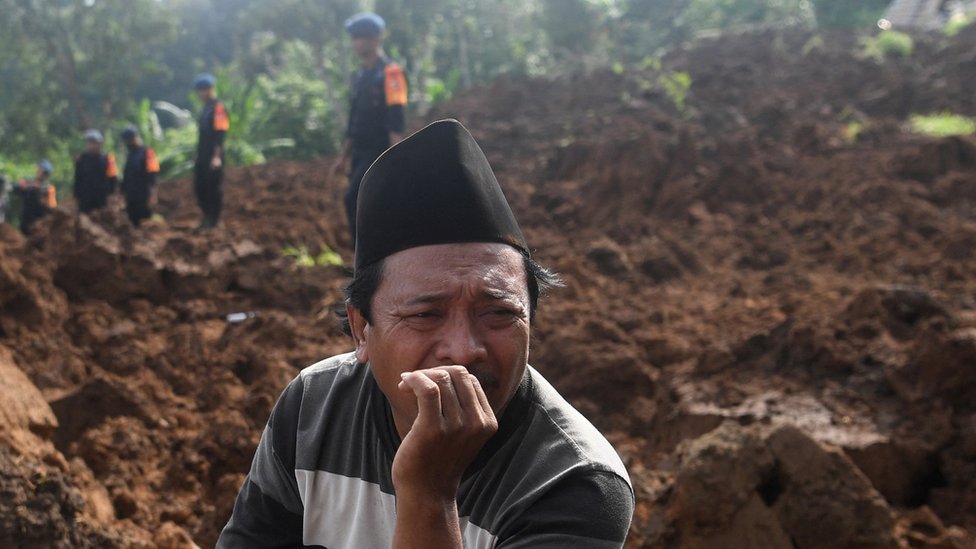 Rescuers are battling dozens of aftershocks in the hilly region of West Java as the search for earthquake survivors reaches its third day.

West Java governor Ridwan Kamil told the BBC that the region had experienced around 140 shocks since Monday’s quake.

At least 268 people, including many children, have died so far. Around 151 people remain missing and more than 1,000 are injured.

Hundreds of responders have been sent to Cianjur to accelerate the rescue.

But their efforts have been stymied by torn-up roads and continuing tremors.

Mr Kamil told the BBC’s Newsday programme that the local community was still exposed to these aftershocks, which have in some cases put responders at risk.

“The follow-up earthquake [sic] is still happening,” he said, but added that he hoped these would come to a stop by Friday. “Currently we are coordinating [our mission] to focus on search and rescue…[as] many people are still missing mostly in remote [hilly] areas [and] mountain tops.”

Mr Kamil told the BBC rescue teams are still traversing the ground on foot and motorbike, with road paths not always accessible, but that they also had helicopters on standby to transport found victims to hospital.

The 5.6 magnitude earthquake struck near the heavily populated town shortly after lunchtime on Monday, reducing scores of buildings to rubble.

Many people were crushed or trapped when walls and roofs caved in. Children are among the victims – with about 80 schools in the area were affected, officials say.

“Most of the casualties are children because at 1pm, they were still at school,” said Henri Alfiandi from the National Search and Rescue Agency.

Aprizal Mulyadi was at school when the quake hit, and was trapped after “the room collapsed”.

The 14-year-old said his “legs were buried under the rubble”, but he was pulled to safety by his friend Zulfikar, who later died after himself becoming trapped.

At least 58,000 people have been evacuated with dozens of refugee camps set up around the area, the governor said. He cited the National Disaster Mitigation Agency which has estimated 22,000 homes have been damaged.

In the village of Cibereum, a family said their eldest son, 28, had died when the house collapsed on him. His relatives and younger siblings had survived because they were on a higher floor.

“We have to dig through the concrete of the second floor that crushed the victim. But we have seen the body,” a military official, Sergeant Payakun told the BBC earlier on Tuesday.

President Joko Widodo had earlier visited the remote disaster zone where he was pictured with responders.

“My instruction is to prioritise evacuating victims that are still trapped under rubble,” he said, adding that he had pledged compensation to affected communities.

Mr Kamil said the government would repair damaged houses, adding that residents living in “vulnerable” areas would be told not to build future houses there.

Earthquakes are common in Indonesia, which sits on the “ring of fire” area of tectonic activity in the Pacific.

The country has a history of devastating tremors and tsunamis, with more than 2,000 people killed in a 2018 earthquake on the island of Sulawesi.