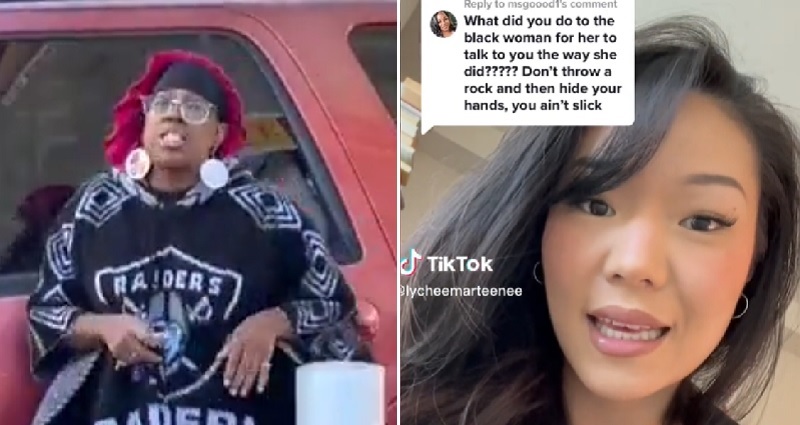 An Asian TikTok user captured the moment a Black woman went on a racist tirade against her at a gas station in Capitol Hill, Seattle.

First uploaded by a user who goes by the name of Stephanie (@lycheemarteenee) on TikTok, the footage of the incident appears to have been taken down but has since been reposted on Reddit.

According to Stephanie, she started recording after the woman began yelling racist remarks at her. When the user accused the woman of being racist, she responded by saying it is “not against the law.”

“Go eat your dog with some rice, b*tch” the woman yells repeatedly. The TikTok user then approached the woman’s vehicle to capture the woman’s license plate.

The woman also says, “Go back to your country, b*tch,” when Stephanie tells her she would upload the video online.

As she enters her vehicle, the woman adds, “Go do some nails or some feet or something, b*tch.” Before she leaves, she rolls down her window and continues to utter more hateful slurs.

More from NextShark: Singaporean bride surprised by wedding visit of Filipina nanny has viewers reminiscing about their yayas

The TikTok user later posted follow-up videos responding to TikTok commenters accusing her of providing a false narrative to give more context to the video and explain how the incident started.

According to Stephanie, she had seen the woman being rude to a senior Asian gas station attendant prior to recording her video.

The woman allegedly threw cash onto the counter aggressively after not being attended to immediately. Stephanie then confronted the woman, who began berating her with racial insults soon after.

In response to a commenter who expressed doubt that she did not say anything racist against the woman, Stephanie wondered why it was so hard to believe that she didn’t.

More from NextShark: Strangers gather one by one to help clean 2,000 bottles of beer spilled on S Korean road in viral video

“I should have minded my own business for my own safety,” she says in the clip. “I should have but didn’t. I spoke up, and I don’t regret that.”

Seattle-area journalist Jonathan Choe was able to track the woman who verbally abused Stephanie to ask for her side of the story.

In a video uploaded on Twitter, Choe introduces himself as a journalist, but the woman declines to speak with him, saying, “I don’t got no side to the story.”

When asked if she regretted spouting the racial slurs, the woman replies, “I don’t. Not at all.”

The video then shows the woman in her window yelling out to Cho that she doesn’t have to tell him anything and to get off her property.

When he asks her if she could apologize for her remarks, the woman alleges that Stephanie called her the n-word.

As Cho continues to ask for proof of her accusations and more details, the woman responds with more profanities. The clip ends with the woman chasing Cho off while throwing rocks at him before walking away and saying, “Eat a d*ck, Asian man. Or a dog with rice.”

Choe also visited the gas station where the initial altercation took place and spoke to the owner, Tommy Lee, who corroborated Stephanie’s story.

“I think she said what felt necessary at the time and I appreciate her standing up for my employee,” said Lee, according to The Post Millennial.

“Honestly, my employees and I know how to deal with individuals like that rude lady pretty well. And sometimes the best thing to do is ignore their ignorance,” Lee was quoted as saying. “Because a person like that doesn’t know much better obviously. It’s such a waste of time getting mad with people like that. I’ve been through it trust me.”

Stephanie, who is Taiwanese American, told The Post Millennial that she does not plan to file a police report, and although online users have been harassing her regarding her version of events, she does not regret her actions.

“It could have been anyone. It could have been a black man at the counter and an Asian person treating them that way,” she said. “I would have said something, cause that’s not okay. You just don’t treat people that way to have that entitlement,”