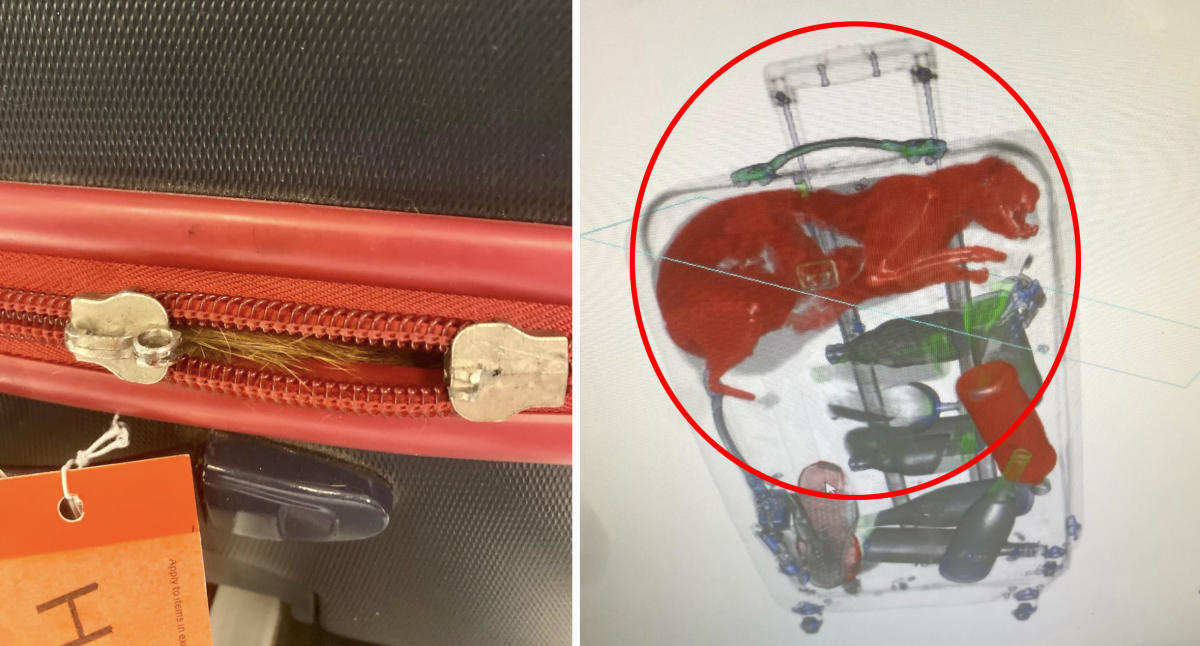 A feline would-be traveller was almost down one of its nine lives before an airport security guard made a startling discovery during a routine scan.

As a suitcase passed through the X-ray machine in New York, a stowaway was spotted inside. The Transportation Security Administration (TSA) took to Twitter to let “the cat out of the bag on a hiss-toric find.”

“A TSA officer was shocked to find an orange cat inside a checked bag at JFK airport after it went through the X-ray unit,” Lisa Farbstein, a TSA spokesperson, tweeted. “[The] traveller said the cat belonged to someone else in his household. On the bright side, the cat’s out of the bag and safely back home.”

In a series of images the furry find was unmasked starting with the X-ray scan which revealed the live animal’s body laid out in the suitcase. Another image captures the sight of orange hair between the zippers of the bag. While in a third photo, taken from security footage, an airport official can be seen lifting the lid of the case to reveal the cat.

The discovery was made on November 16 when the bag was checked in at the airport for a Delta flight to Atlanta, as reported by the Mirror. It would then have gone on to Florida.

“This CATch had our baggage screening officers at JFK Airport saying, come on meow!” the TSA wrote online.

‘Got to be kitten me’

The images of the stowaway have since gone viral. “You got to be kitten me,” one person wrote. “What a CATastrophe,” said another.

While others joked that cats had a penchant for hiding in luggage. “That’s why I make sure all my cats are accounted for before I close my suitcase,” someone said.

But others wondered if the owner had been “trying to avoid the fee”.

“[I’ve] personally seen this first-hand and it’s not pleasant,” another said. “Reason why this happens is when a passenger is either neglectful, not paying attention or just doesn’t care that the machines can make their pet sick.”