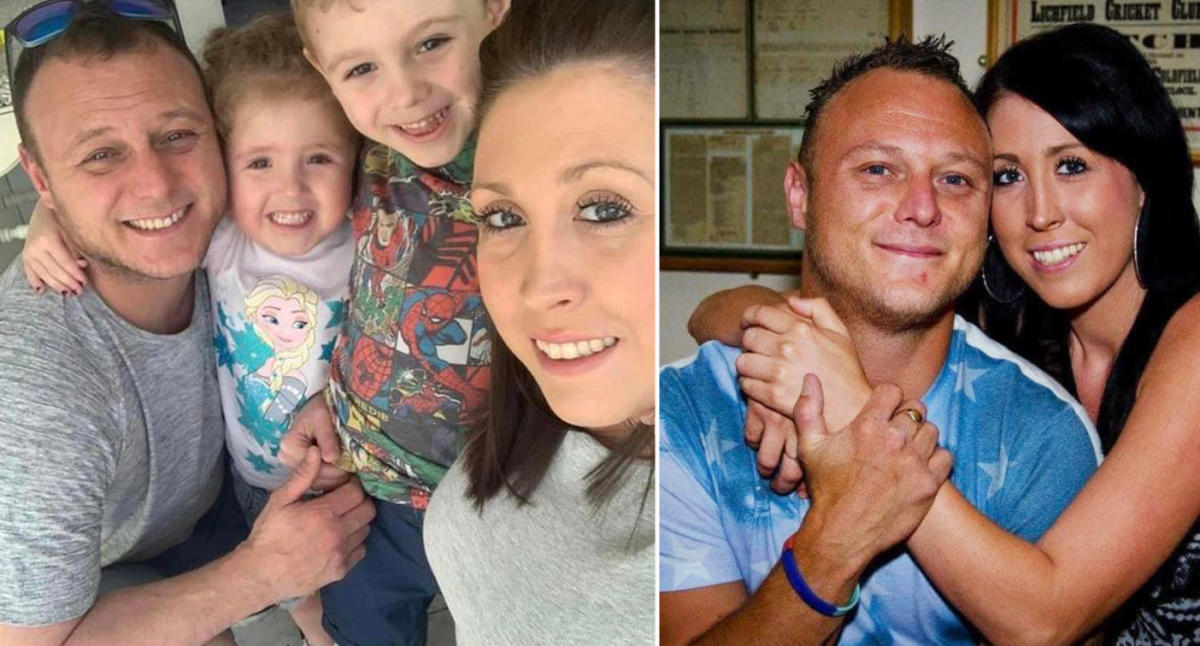 A mum and dad with two young children have both died four weeks apart tragically leaving their kids, aged 6 and 8, orphaned.

Amie Walton, 30, had been battling bowel cancer, which had spread to her liver, and died on August 18. Exactly one month earlier on July 18 her soon-to-be husband Chris Mills, 43, passed suddenly in his sleep. The pair had fallen asleep together and when the mum of two woke, she found her husband had died from a burst stomach ulcer.

At the time of his death, the couple were reportedly staying at the Good Hope Hospital in Birmingham, where they live in the UK. Ms Walton was receiving treatment for her cancer, UK media reported. Ms Walton was diagnosed with stage 4 bowel cancer in September, 2020 after doctors discovered a tumour the size of a pea on the right side of her colon. She’d been complaining of bad heartburn and pain in both shoulders but at first thought nothing of it.

Now left without parents, the couple’s children, Harry, 8 and Mia, 6, are being “lovingly cared for” by grandparents, a friend of the family revealed on a Crowdfunder campaign set up for them. “We’re deeply touched and affected by this tragedy as we felt a personal connection to the loss,” they wrote.

Following the sudden death of her fiancé, the grieving mum shared her heartache on Facebook. “We love you so much. It hurts not having you by my side. I never thought pain could hurt so much,” she wrote on July 25. “You were a great daddy and please keep looking over your babies. I love you Mr Mills forever and always” she added.

After his funeral, the mum of two travelled to Devon in southwest England to be with family, some 284km from her home city. While there, she became unwell and landed back in the hospital, a friend of hers revealed — a week later, she died.

Posting on Facebook following her sad passing, her friend said she “spent her last week with the people she loved most, laughing, joking and making memories with her children”. “Amie was a fighter, the strongest person we’ve ever known and she fought until the very end. She kept her sassiness and sense of humour over the past 2 years and never lost hope even when the odds were stacked against her,” she wrote.

Her Facebook page has since been flooded with heartbreaking tributes from friends and family. “Rip Amie, such a brave young lady, fought to the very end, life’s so cruel,” one said. Another said they could sit for hours and share stories about “how amazing and beautiful a soul she was” and said anyone who had the privilege of knowing her “instantly became a better person”.

Following her terminal diagnosis, Ms Walton said the hardest part was knowing she had to leave her children. “I’m a young mum with young children. I shouldn’t be in and out of hospital wondering how long I have left,” she said at the time. “I don’t want to die. I want to be here for all their milestones. Whenever I hold my children, I feel so proud of them, I just want to cry.”

The Crowdfunder campaign has so far raised almost $80,000. A previous campaign set up for Ms Walton on GoFundMe raised an additional $107,000 for the family.