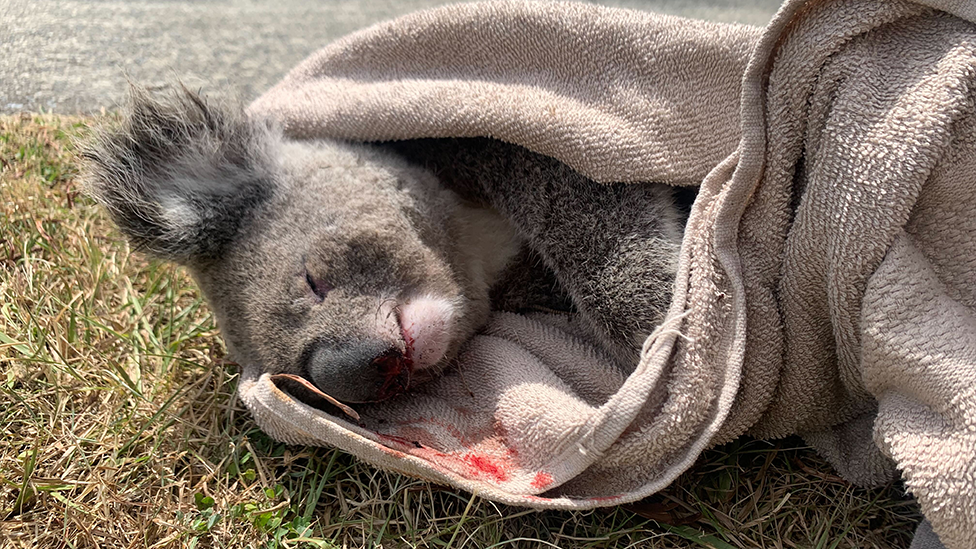 Do you know what to do if you hit a native animal while venturing out this holiday season?

Exhausted from cleaning up after motorists, wildlife carers are urging drivers involved in collisions to stop when it’s safe to do so. And always call for help.

The picture below shows a female koala who was hit and left for dead on a quiet Gold Coast street. Her rescuer wants you to know the animal’s story.

Animal rescuer Amy Wregg, works for WIRES and volunteers at WildCare. She believes the large female koala crawled to the edge of the road and died after she was hit by a car.

The incident occurred on Monday night within metres of a school zone. She was discovered by a member of the public who was driving through the Gold Coast the following morning and subsequently called for assistance.

The image shows the large female after she’d taken her final breath. Instead of eating gum leaves high in a tree, she’s wrapped in a bloody towel.

Speaking to Yahoo News Australia on Tuesday, Ms Wregg said she’s already attended to four injured koalas this week. Sometimes accidents with wildlife are unavoidable, but what frustrates her is when animals are struck and left to slowly die.

“Just call someone if you hit an animal, don’t leave it suffering on the side of the road,” she said. “You just don’t know how long it took the koala to actually pass away from her injuries.”

Ms Wregg said it’s “heartbreaking” for rescuers to see healthy endangered koala “lives wasted”, particularly when they’re otherwise healthy. If rescuers are called in early enough they’re able to harvest koala droppings known as “pap” which can be used to help build up the gut flora of sick and young koalas. Eating it allows koalas to build up a tolerance to the toxicity in gum leaves which would otherwise make them sick.

Key things you can do to help wildlife this Christmas:

Across Australia, wildlife is suffering as the effects of development, land clearing for agriculture, logging and natural disasters. Displacement has led animals to seek refuge in unusual places including weather garages, outbuildings, verandahs and under the eaves of roofs.

WIRES told Yahoo News Australia wombats and echidnas have been particularly impacted by water entering their burrows from floods, and are venturing across roads in search for new habitat. Possums and gliders have also been displaced by heavy rains, making them vulnerable to dog and cat attacks.

“They are further at risk of attack by domestic pets so if you are holidaying in a known wildlife area please always keep your pet dogs on leads when taking them on walks,” WIRES’ spokesperson John Grant said. “The simple message is that like most domestic pets, native animals have no sense of danger on the roads so it’s up to us to protect them by driving especially carefully in areas where they live.”