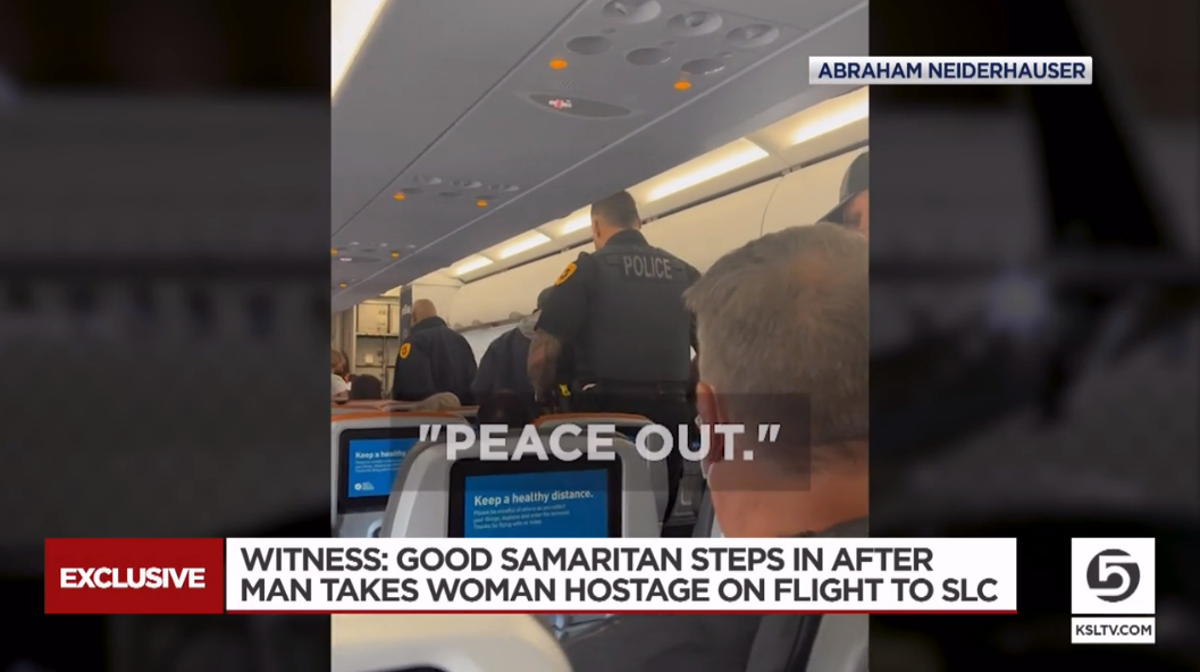 A good samaritan has been hailed for saving a woman on a flight after she was held hostage by a fellow passenger brandishing a razor blade.

The incident unfolded on Monday on board JetBlue flight 871 travelling from New York City to Salt Lake City, Utah, when the allegedly intoxicated suspect Merrill Darrell Fackrell suddenly pulled a blade on a fellow passenger and held it to the terrified woman’s throat.

A good samaritan sprung into action and managed to get the knife from the perpetrator – before sitting with him until the flight could land and police arrested him.

Mr Fackrell, a 41-year-old Utah man, was arrested and charged with federal counts of carrying a weapon on an aircraft and assault with a dangerous weapon on a plane, according to a news release issued by the US Department of Justice.

Mr Fackrell had reportedly consumed “several” alcoholic beverages throughout the duration of the flight and had “engaged ML in conversation while RL had headphones on and was working and watching a movie,” according to court documents obtained by Gephardt Daily.

When the woman returned to her seat after going to use the washroom, she put her headphones on and began watching a movie, the documents say. Shortly after starting the film, however, the woman noticed that Mr Fackrell had put his hand across her screen and asked that she pause her movie.

It was then, as she began to remove her headphones, that ML realised something was entirely not right

“[Mr] Fackrell had his hand clutched with what appeared to her as a knife, inches from her skin at her throat/neck area near the collar of her shirt,” the complaint says.

The woman’s husband registered then and there that something wasn’t right, the complaint said, and it was at this point that Mr Fackrell told him to “get the [expletive] out of here,” the documents say.

The man identified only as RL then ran up to the front of the plane to get assistance from the flight attendants, while his wife continued to struggle with the suspect.

Passengers on board the flight recounted the altercation to KSLTV and explained how – after they realised that the man was holding some kind of weapon against the woman’s throat – panic swept the cabin.

Abraham Neiderhauser, who was returning home to Utah after spending five months travelling around Europe, was seated a few rows behind Mr Fackrell and the woman, providing him a vantage point where he was able to capture some of the interaction on camera and hear almost everything that was going on.

Mr Neiderhauser added: “He’s like, ‘This ain’t no 9/11 s***. He’s like, ‘Just land the plane, and everyone will be fine.’ We didn’t understand why he wanted the plane landed.”

Not long after the passengers on the plane began to register what was happening, ML managed to break free from the clutches of the 41-year-old and “lunge” into the aisle, the complaint says.

Then, a passenger seated across the aisle from the suspect, registered what was going on and confronted him.

The good samaritan, identified only as RH, “began a confrontation with [Mr] Fackrell and was able to get him to put the object down on the seat,” the complaint says.

At that point, RH grabbed the blade and passed it off to the crew for safekeeping.

The good samaritan then sat next to Mr Fackrell for the remainder of the flight.

Mr Neiderhauser, who identified the good samaritan by his first name “Rob”, acknowledged that his bravery did not go unappreciated by the tense cabin of passengers, all of whom were on edge for the next 30 minutes until the plane landed and the suspect was led away by police.

“Rob was very brave, you know, engaging like this,” he said.

Before police arrived, Mr Neiderhauser grabbed his cellphone again to film the suspect being taken off the plane, as he shouted back at the passengers: “Peace out”.

“You could kind of feel the whole plane breathe this collective sigh of relief,” Mr Neiderhauser said, later adding that “after he left, everyone clapped for Rob because they were really grateful for him”.

He added: “I think for a lot of people, it was really traumatic.”

The knife-like object turned out to be a Facón wood-handled straight-edge razor with a one-to-two-inch blade, according to the FBI.

It is not clear when the suspect will next appear in court.