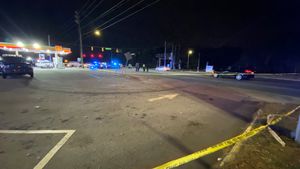 Police told Channel 2 Action News that a teen was shot and killed in Stone Mountain on Thursday evening.

The shooting happened around 7 p.m. near the 300 block of South Stone Mountain Lithonia Road, police say.

Investigators believe the teen was walking toward the Shell gas station when shots were fired from a car driving by. The teen died on the scene.

Anyone with information on the shooting is asked to contact the DeKalb County police.