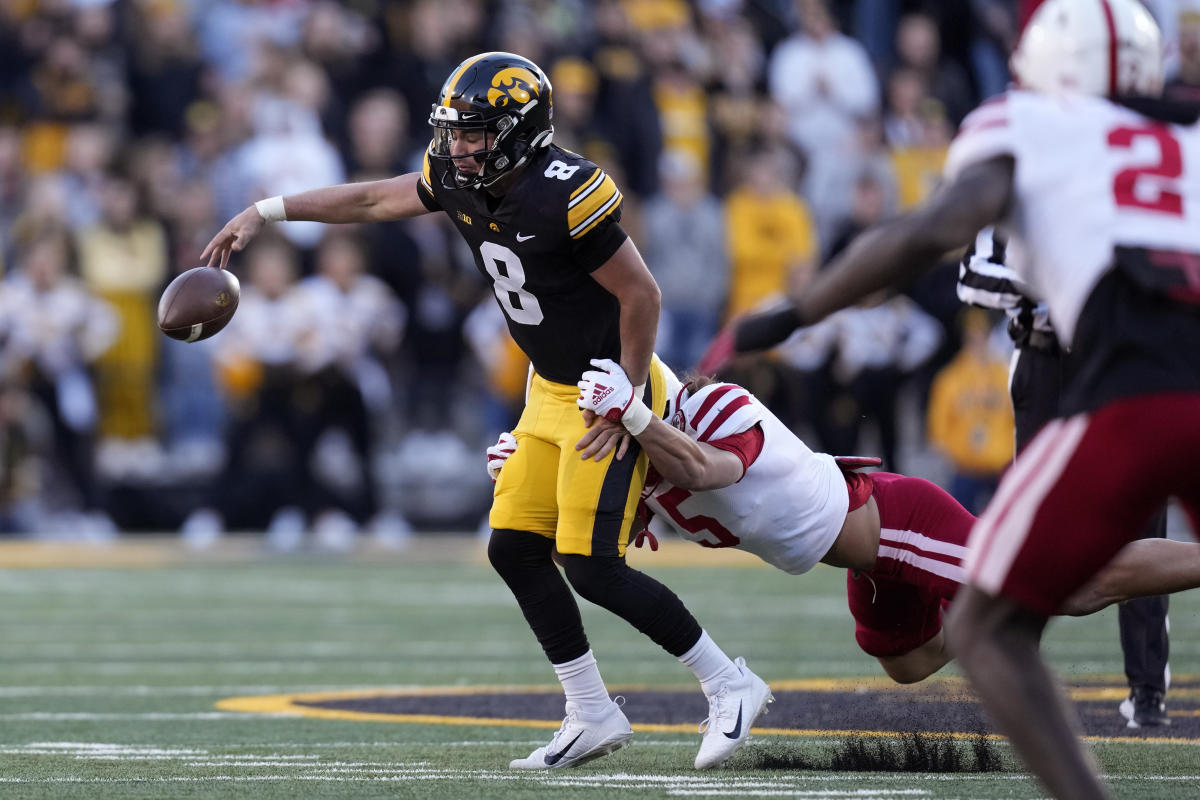 Iowa’s chances of being in the Big Ten title game are now incredibly slim.

The Hawkeyes squandered a fantastic chance to play for the Big Ten title in a humiliating 24-17 loss at home to Nebraska on Friday. Iowa was down 17-0 at halftime and its late comeback eventually fell short when it turned the ball over on downs with just over two minutes remaining and when Alex Padilla was picked off with 42 seconds to go.

The Hawkeyes played much of the game without QB Spencer Petras after he exited the game in the first half because of an apparent right shoulder injury. Padilla led the team to two second-half TDs, but Iowa’s lack of tactical aggressiveness at times in the final 30 minutes was head-scratching.

Iowa’s first TD of the game came in the third quarter. With Nebraska leading 24-0 before the score, a two-point conversion would have cut the deficit to two possessions. Iowa instead chose to kick the extra point and cut the lead to 17 points and keep it a three-score game.

Minutes later, Iowa was still trailing by 17 and drove into Nebraska territory and faced a 4th and 12 with less than a minute to go before the fourth. Instead of going for the first down given the three-score deficit, Iowa chose to punt the ball back to Nebraska.

Did those decisions cost Iowa the game? Not entirely. But they certainly didn’t help Iowa’s chances of winning the game. After all, this is an Iowa offense that had scored 17 points just three times all season before Friday. Minimizing the number of possessions it needed to tie the game would seem like an good idea.

But so would not being down 17-0 at halftime. An Iowa defense that has kept its part of the bargain up for most of the season had one of its worst halves of football at an inopportune time on Friday. And that could ultimately cost Iowa a chance to be a massive underdog to either Michigan or Ohio State in the Big Ten title game.

Missouri made it to 6-6 and became bowl-eligible with a 29-27 win over Arkansas.

Missouri sacked Arkansas QB K.J. Jefferson six times as it led for all but 12 minutes of the game. Arkansas took a 21-20 lead just before halftime, but Missouri scored to open the third quarter and never trailed again.

The Razorbacks had chances to win the game late, however. Arkansas got the ball back three times after kicking a field goal to cut Missouri’s lead to two with 12:40 to go. But two of its drives ended in punts and the third ended on a last-ditch lateral play as time expired.

As Mizzou heads to a bowl game because of the victory, Arkansas is left to lament a disappointing season at 6-6. The Razorbacks were pegged to be mid-pack contenders in the SEC West and instead finished with the same 3-5 conference record as Mizzou. Arkansas also lost to Liberty at home before losing by three to LSU. The Razorbacks finished just 1-4 in one-possession games in 2022.