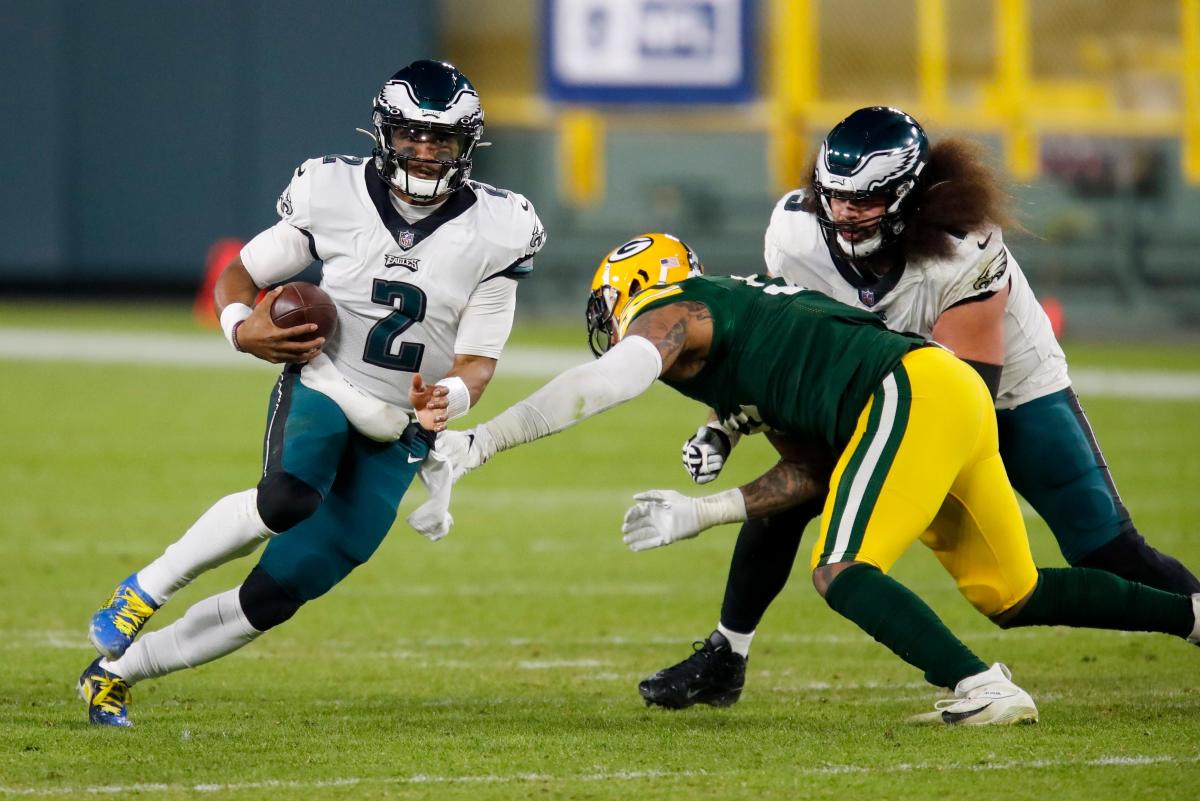 PHILADELPHIA — It was just about two years ago against the Green Bay Packers when Jalen Hurts replaced Carson Wentz in the third quarter, changing the trajectory of Hurts, Wentz and the Eagles’ future.

Hurts became the Eagles’ starter the next week and has had a firm hold on the job ever since, while Wentz is on his third team in three seasons.

But after that game on Dec. 6, 2020, Hurts and Packers quarterback Aaron Rodgers shared an extended handshake on the field. Hurts said then that hd did most of the talking following the Eagles’ 30-16 loss in a desultory 4-11-1 season.

Hurts said back then that he told Rodgers that he was trying to give the Eagles defense a good scout-team look at Rodgers that week in practice.

“(Rodgers) said, ‘Did you get the cadence down?'” Hurts said then.

A HOMECOMING FOR DARNELL SAVAGE:As Delaware native returns vs. Eagles, times have changed for him, Packers’ Aaron Rodgers

Hurts’ response? “‘I’m still working on that. Not on your level yet.’ It was a lot of fun talk.”

But Hurts did learn something valuable that day from watching Rodgers, something that has enabled Hurts to become one of the NFL’s top quarterbacks this season as the Eagles (9-1) have the NFL’s best record heading into their Sunday night matchup against Rodgers and the Packers (4-7), who are struggling.

“I have a lot of respect for any quarterback that goes out there and plays the game in an efficient, winning way,” Hurts said. “I think when you look at the NFL right now, there are a ton of different quarterbacks that do it in their own way.

“There’s no definitive way to play the position. It’s all about winning in the end, and it looks different from different quarterbacks. You talk about a guy like tom Brady and Aaron Rodgers, guys I watched growing up as a kid, they are guys that set the precedent for the position in many ways. They’re great for a reason.”

In other words, what works for Rodgers won’t necessarily work for Hurts. And that’s OK.

After all, Hurts adds a dynamic as a runner that few quarterbacks can match. But Hurts does embody another trait from Rodgers that helps him navigate difficult situations.

AT A CROSSROADS:After 2 difficult games, are Eagles in trouble, or showing signs of a championship team?

Hurts has often admitted studying Tom Brady over the years, as well as Russell Wilson. He’s also good friends with Peyton and Eli Manning, going back to when he attended the Manning Passing Academy while in high school.

And Eagles coach Nick Sirianni said he often gives Hurts another sounding board in Philip Rivers, who retired after the 2020 season after 17 NFL seasons. Sirianni was Rivers’ offensive coordinator with the Colts in 2020 and was an assistant coach on the Chargers’ staff when Rivers was there.

“A huge part of getting better is being able to watch people, great people of the past, see their techniques, see how they did it,” Sirianni said. “One thing that I like to do is like, ‘Hey, Philip, can you Zoom in with us and just talk to Jalen about how you saw this play? … We know what we taught on this play, but just give him a little more insight.'”

Still, when Hurts exchanged words with Rodgers two years ago, it was a stretch to imagine Hurts playing at this level. The Eagles ended up benching Wentz for the rest of that season, then trading him in the spring of 2021 while essentially naming Hurts the starter.

Even then, Hurts was hardly overwhelming, completing 61.3% of his passes with a mediocre 87.2 rating in 2021. The Eagles switched to a run-based offense, led by Hurts, to finish 7-3 in order to make the playoffs.

But Hurts has improved dramatically as a passer this season. As a result, the Eagles have become the NFL’s best team.

All you have to do is go back to that last game against Green Bay. Hurts, on the other hand, is too busy looking forward rather than back.

“Not really,” he said about whether he looks back to that game. “I know my first time ever really playing in the NFL was against Green Bay. That’s the reality of it.”

The Eagles are 6 1/2 point favorites against Green Bay, according to Tipico. It’s safe to assume the Eagles are such heavy favorites against the Pack for the first time since the 2010 season. During that time, the Packers have won 6 of the 8 games between the two teams, beginning with both games in 2010 (regular season and playoffs).

It’s easy to see why as Green Bay has won at least 10 games in a season nine times in 12 seasons. Incidentally, the Packers didn’t play the Eagles in 2017 and 2018 when Green Bay didn’t win at least 10. Also, the Eagles won the Super Bowl in 2017 and returned to the playoffs the next season.

But the point spread this time could be somewhat misleading.

Rodgers admitted this week that he played the last 6 games with a broken thumb. Over the last two games, however, Rodgers has played more like his usual self.

He has thrown for 5 touchdowns without an interception, with a passer rating of 115.9, more along the lines of his best NFL seasons. Before that, Rodgers had 7 INTs, the most he has had in an entire season since he had 8 in 2015, and a passer rating of 89.0. His career-low rating is 92.7.

Much of that has to do with the emergence of rookie wide receiver Christian Watson, who has caught all 5 of Rodgers’ TD passes the last two games. It’s not a moment too soon for Rodgers and Green Bay, who have struggled adjusting to life without receivers Davante Adams (traded to the Raiders) and Marquez Valdes-Scandling (signed as a free agent by Kansas City

The Eagles, meanwhile, are going through a similar transition without star tight end Dallas Goedert, who suffered a shoulder injury against Washington on Nov. 14 and went on injured reserve.

So for the Eagles to win, the defense will have to get to Rodgers, while stopping running back Aaron Jones. The recent additions of defensive tackles Ndmukong Suh and Linval Joseph should help on defense, although Suh said Rodgers is so smart that “he’ll look at you and laugh” as he’s throwing the ball away.

But if Rodgers has truly recaptured his form from past seasons, then the Eagles’ offense will have to keep up against a defense ranked fifth against the pass, allowing 193 yards per game.

Then again, it could be a big running game for Hurts and Miles Sanders as Green Bay is not nearly as good against the run, allowing an average of 135 yards per game.

It might not be pretty, again, but it should be enough to win.