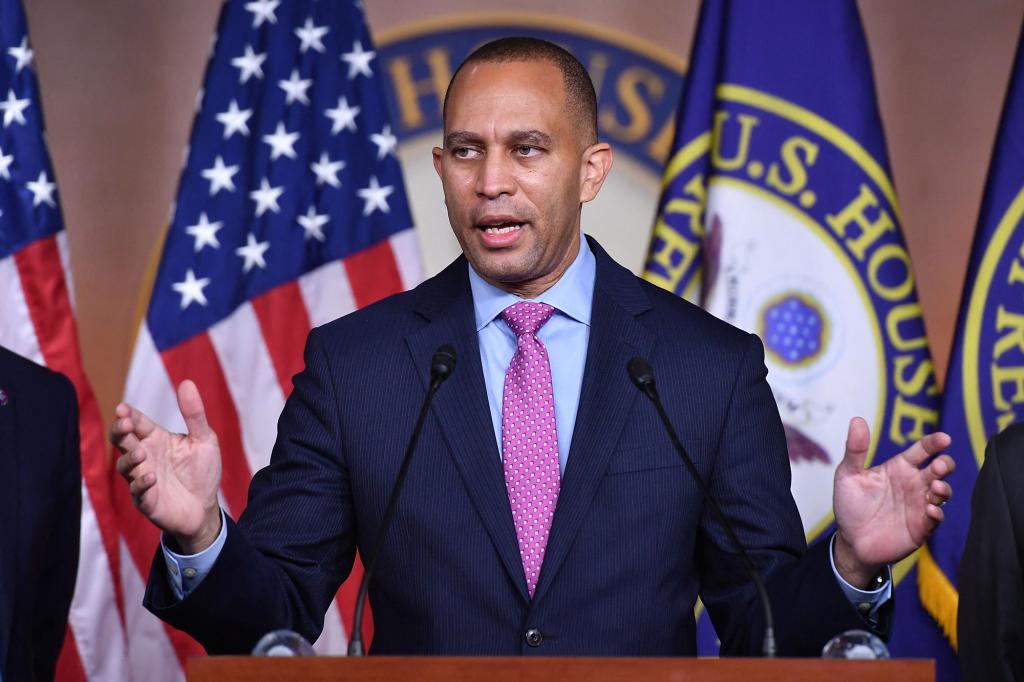 House Democrats elected Rep. Hakeem Jeffries as their leader Wednesday, making the Brooklyn and Queens lawmaker the first black person to lead either party in the chamber and ushering in a new generation of Dem leadership after House Speaker Nancy Pelosi announced earlier this month she would step aside after 20 years in charge.

Jeffries, 52, was selected by his colleagues during a closed-door meeting on Capitol Hill after they lost control of the chamber in the Nov. 8 midterm elections.

“It’s a solemn responsibility that we are all inheriting. And the best thing that we can do as a result of the seriousness and solemnity of the moment is lean in hard and do the best damn job that we can for the people,” Jeffries told reporters the night before his election.

Jeffries, first elected to Congress in 2013, told his colleagues in a letter announcing his leadership bid Nov. 18 that he will look to the future with an eye toward unifying the party and regaining the majority in 2024.

“To further unleash our talent and ability in the most powerful fashion possible, the entire team should be on the playing field and put in position to elevate our individual strengths, interests and areas of expertise,” he wrote.

“It will be my mission to make sure that every single Member of the Caucus has an authentic seat at the legislative table and the maximum opportunity to excel. That is my promise to you,” he continued in the missive.

Along with Jeffries, Democrats elected Rep. Katherine Clark of Massachusetts as minority whip and Rep. Pete Aguilar of California as caucus chairman.

Pelosi, 82, who announced on Nov. 17 that she would not seek reelection as the Democratic leader was awarded the title of “speaker emerita” late Tuesday. Clyburn, also 82, will take on the fourth-ranking role of assistant Democratic leader.

“It an important moment for the caucus — that there’s a new generation of leadership,” said Rep. Chris Pappas (D-NH) said before the vote.

The seamless transfer in the Democratic leadership stands in contrast to their colleagues across the aisle.

Rep. Kevin McCarthy, the House minority leader, overcame opposition from members of his party to win the GOP nomination for speaker earlier this month.

But he’s scrambling to win the 218 votes needed to win the post when the full House votes on Jan. 3, the first day of the new Congress.

McCarthy (R-Calif.) defeated Rep. Andy Biggs (R-Ariz.) for the nomination by a 188-31 vote among the House Republican conference, falling 30 votes short of the number needed to obtain the gavel.

Biggs and five other Republican House members — Matt Gaetz of Florida, Bob Good of Virginia, Ralph Norman of South Carolina, Matt Rosendale of Montana and Chip Roy of Texas – have said they will not support McCarthy.

In an interview on Monday, McCarthy warned Republicans not to “play games” or the Democrats, despite being in a minority, could pick the chamber’s next leader.

“This is very fragile that we are the only stopgap for this Biden administration,” McCarthy said in an interview with Newsmax. “And if we don’t do this right, the Democrats can take the majority. If we play games on the floor, the Democrats could end up picking who the speaker is.”