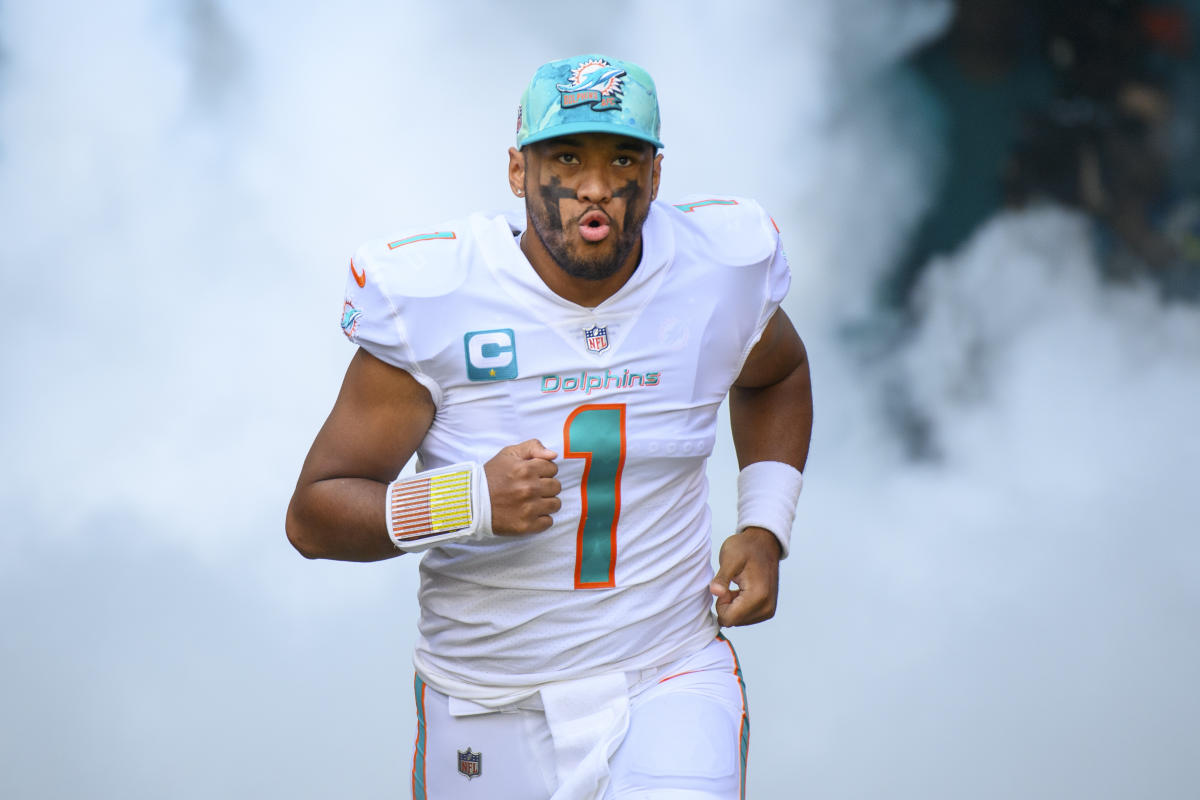 The great debate of the 2020 draft is getting prime-time treatment in Week 14.

The NFL announced on Tuesday that the Dec. 11 game between the Los Angeles Chargers and Miami Dolphins is moving into the 8:20 ET “Sunday Night Football” slot on NBC, replacing a scheduled game between the Kansas City Chiefs and Denver Broncos. The AFC West matchup will move to 4:05 ET on CBS.

The game will feature two of the top six picks from the 2020 draft in Dolphins quarterback Tua Tagovailoa (No. 5) and Chargers quarterback Justin Herbert (No. 6). The 8-3 Dolphins lead the AFC East and trail the 9-2 Chiefs for the best record in the AFC and the conference’s No. 1 seed in the playoffs. The 6-5 Chargers are on the outside looking in on a competitive AFC wild-card race and are playing for their postseason lives.

Quarterback intrigue highlighted the 2020 draft long before it took place. After leading Alabama to victory over Georgia in the 2018 CFP championship as a freshman, Tagovailoa was pegged as a top target for the NFL draft. He followed that effort up as the SEC Offensive Player of the Year and a Heisman finalist during the 2018 season, sparking the NFL’s Tank for Tua campaign of 2019.

But a hip injury cut his junior season short and raised concerns about his NFL future. Meanwhile Joe Burrow burst on to the scene in leading arguably the greatest offensive season in college football history as LSU won the national championship. He went No. 1 to the Cincinnati Bengals.

When the Dolphins arrived at No. 5, they faced a choice: Pick the upside of Tagovailoa or take Herbert, the rocket-armed quarterback out of Oregon. They chose Tagovailoa. The Chargers then made the no-brainer decision of selecting Herbert.

Tagovailoa struggled in his first two seasons, hampered by his lingering injury while leading a Dolphins offense that ranked in the bottom half of the NFL in 2020 and 2021. Herbert, meanwhile, earned Offensive Rookie of the Year honors in 2020 and a Pro Bowl berth in 2021, prompting concern in Miami that the Dolphins made a mistake.

But the tides have turned in 2022. Armed with Tyreek Hill while running a new offense under rookie head coach Mike McDaniel, Tagovailoa has emerged as the NFL’s most efficient passer. He’s quelled concerns about his arm strength with a league-best 9 yards per attempt on a team that looks playoff bound. Meanwhile, Herbert’s shown a slight regression on a Chargers team that’s yet to make the playoffs since he joined the franchise and is far from a sure thing to do so this season.

At this point, there’s no denying that they both have tremendous talent and upside. They’ll forever be linked by their positions in the 2020 draft. Tagovailoa won the first round in a 29-21 Dolphins win in 2020.