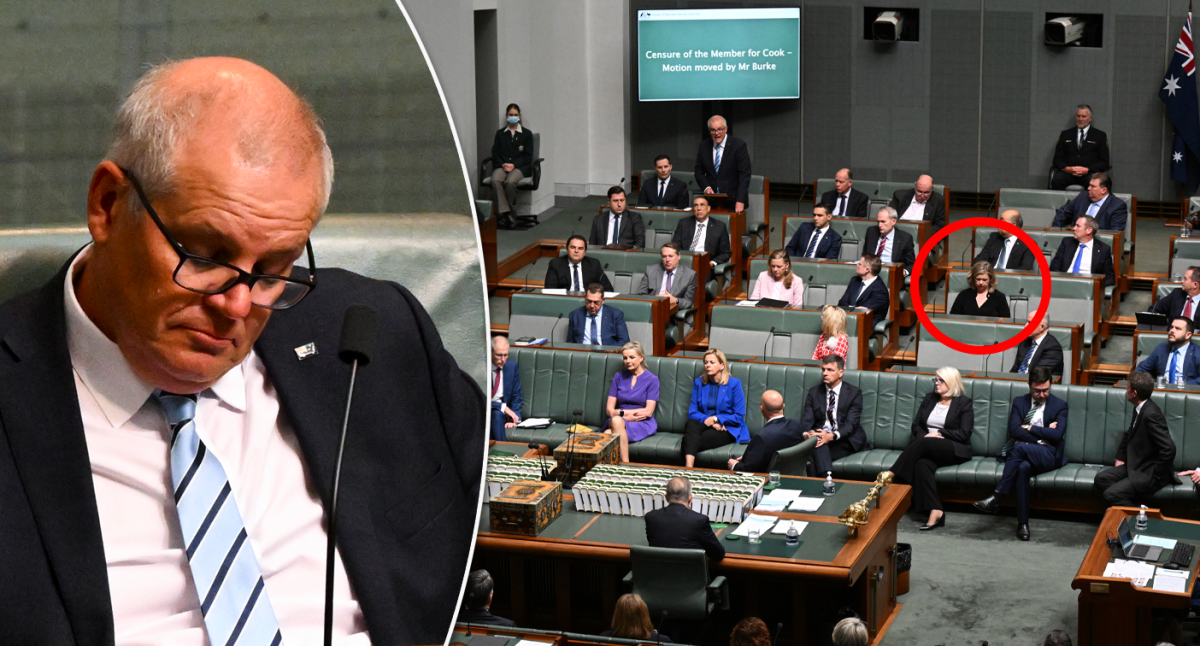 Scott Morrison has become the first former prime minister to be censured by the Australian parliament as the fallout from his secret ministries reached a dramatic conclusion in the House of Representatives on Wednesday.

Hours after he delivered a defiant speech on the floor of parliament in defence of his actions as prime minister, the chamber voted to censure him with the punitive motion carrying 86 votes to 50.

The unprecedented move was supported by a lone sitting member of the Liberal Party, Bridget Archer, who described Mr Morrison appointing himself to five ministerial portfolios without telling anybody as “entirely unnecessary”.

“I do not accept any of the explanations put forward by the former prime minister … and I’m deeply disappointed by the lack of a genuine apology or, importantly, understanding of the impact of his decisions,” she told parliament.

But one of Mr Morrison’s Liberal Party predecessors was shocked that she stood alone on her side of Australian politics.

Speaking to Yahoo News Australia, former Liberal leader John Hewson said today’s vote was about “calling out” what Mr Morrison did “and making sure there’s a basis to go forward”.

“There are principles of our democracy that need to be adhered to,” he said.

The censure motion is symbolic in nature and is about the country’s record books officially registering the parliament’s discontent.

“It records the fact that he [Morrison] did such such damage to our democracy”.

“He was always self-absorbed in anything he did, and those sorts of decisions he made have consequences,” Mr Hewson said.

“His legacy is one of considerable incompetence and significant consequences left for others to clean up.”

Noting that Ms Archer was the only Liberal member to vote in favour of the censure motion, Mr Hewson said the party he once led was “self destructing”.

“I would have thought you would want to be distancing yourself from the worst prime minister in our history … I’m surprised that more people didn’t feel the need to record concern about this issue,” he told Yahoo.

“The party is trying to say ‘we stand for our values’, but you doubt what those values are, really.”

Mr Hewson led the federal Liberal Party from 1990 to 1994, losing a federal election to Paul Keating.

Prime Minister Anthony Albanese this morning took aim at Mr Morrison, in the wake of his defiant speech to parliament.

“I thought this morning that we would see some contrition — some. A semblance of contrition. We got none of that. We got hubris, we got arrogance, and we got denial,” Mr Albanese lamented.

Earlier, Mr Morrison defended his decision and described the powers as a “dormant redundancy”.

“I note the criticisms made of my decisions to be authorised to administer a series of departments have been made from the safety and relative calm of hindsight,” he said.

“The government’s response to censure and prosecute this motion is to engage in the politics of retribution and nothing less.”

Earlier this week, a major masthead with the Nine Newspapers called for Mr Morrison to resign from parliament. Today, Environment Minister Tanya Plibersek predicted that would happen by Christmas.