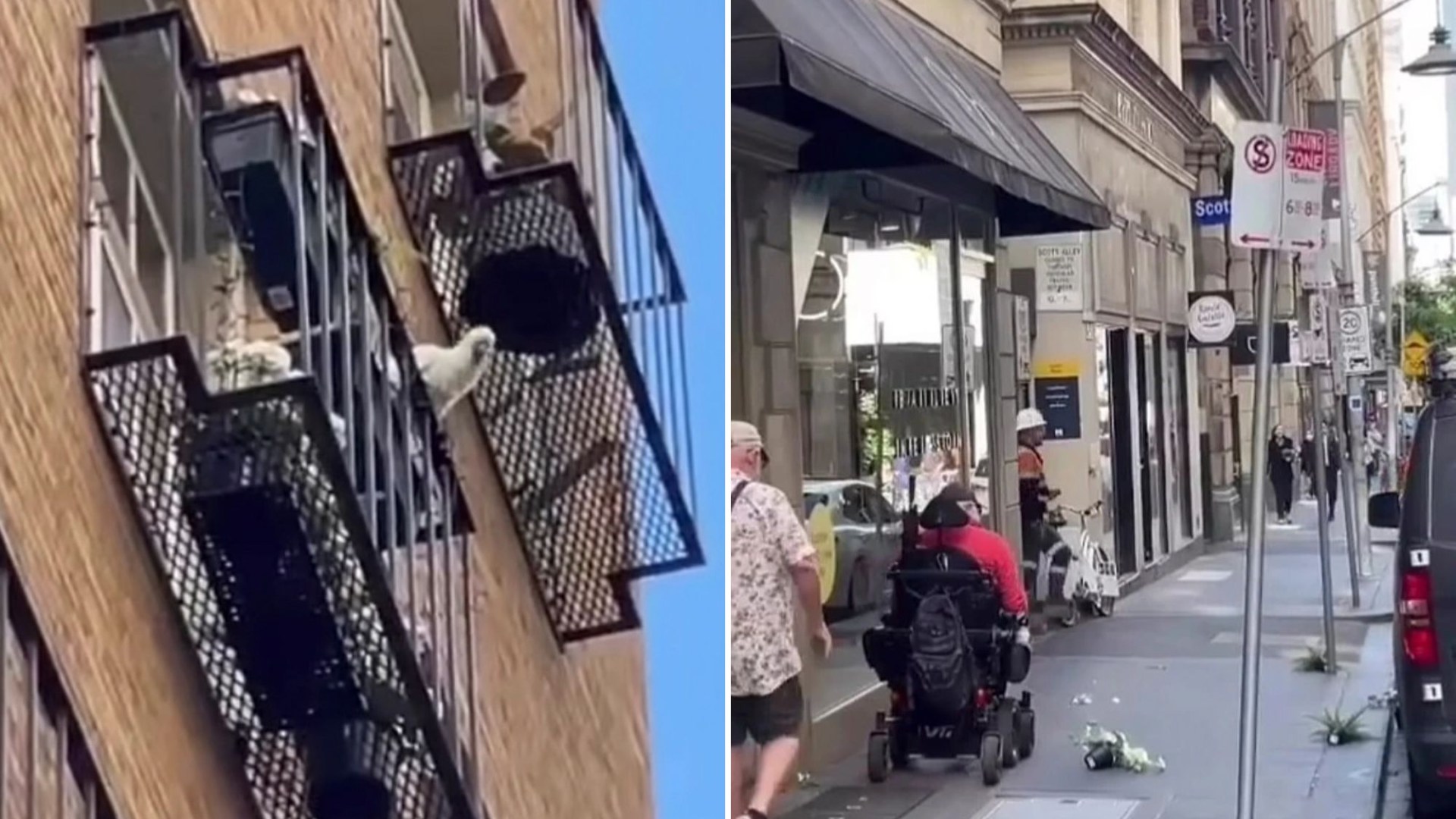 THIS is the moment a cockatoo deliberately pushes a plant pot off an apartment balcony, sending it crashing to the busy pavement filled with pedestrians below.

A public warning has been issued by the City of Melbourne Council after a sulphur-crested cockatoo was filmed picking up the plants on a balcony and then dropping them onto the footpath, endangering the people passing by.

Footage filmed on Monday shows the naughty bird several storeys up an apartment building on Finders Lane in the Australian city, dropping the plants as bystanders look on.

A construction worker kept a beady eye on the feathery culprit.

In the film a man can be heard warning bystanders to “just be careful… He’s not happy. Here comes another one.”

A man using a mobility scooter was among those nearly hit by the projectiles.

The apartment building was above an optometrist on the corner of Scott Alley, close to the busy Swanston Street.

The video of the incident has now been seen by more than 1.5million online viewers since it was shared on social media meme page Brown Cardigan.

It’s not the first time the bird has caused chaos either.

Resident Jason told ABC Radio Melbourne: “It started happening during lockdown. I think it is quirky and funny.

“There is nothing you can do about it. At the end of the day it is nature.”

Cafe manager Lucie Amulet said: “It happens every year. They mostly drop plants but also socks as well. I think it is fun.”

The viral clip has also picked up hundreds of comments from amused viewers.

One said: “Haha he’s looking down at everyone thinking ‘what are you gonna do? Call the cops?’”

Another wrote: “I like how he looks down to inspect his handy work.”

Others though considered the possible nightmare of having to lodge an insurance claim.

One woman joked: “I like to claim insurance for my car.. a cockatoo dropped a pot on my windshield.”

Having been alerted to the footage, the City of Melbourne Council urged residents to remove pot plants and other sources of food from apartment balconies, which could attract birds.

An online viewer wrote: “This is why you shouldn’t feed them. If you’re not there on time they get annoyed and start trashing the place.”

Sulphur-crested cockatoos are intelligent animals but have become a pest in many urban areas of Australia, where the birds can use their beaks to flip wheelie bins and destroy timber decking and panelling on buildings, according to the Australian Museum.