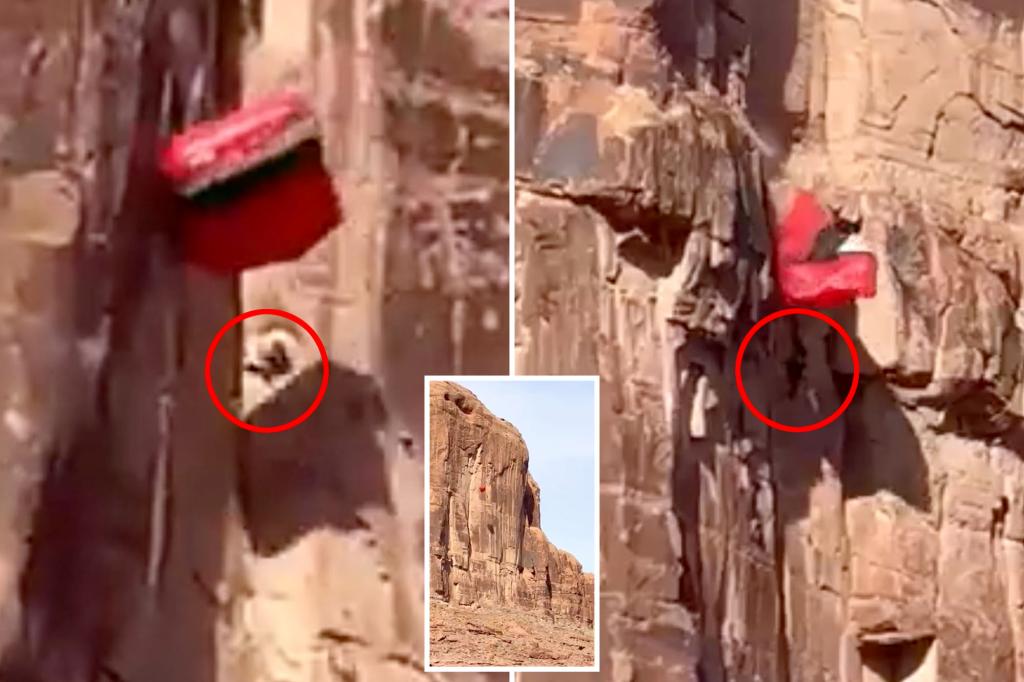 Heart-stopping footage shows the moment a BASE jumper smashed into the side of a Utah cliff and miraculously dangled 100 feet above the ground from his parachute.

The base jumper was knocked unconscious by the collision, but was alive when he was rescued and airlifted out of Kane Creek Canyon more than an hour after the death-defying accident Saturday, according to Fox 11 Los Angeles.

Video of the footage was taken by a family visiting Moab on vacation who had stopped to watch a half dozen or so jumpers making their descent from the top of a tall cliff, KSL-TV reported.

After watching two successful jumps, Edwards told the outlet that he and his 12-year-old son then took out their phones to record the fateful attempt, and captured the moment a gust of wind apparently slammed the daredevil into the aptly named Tombstone cliff.

“Oh! Oh my goodness,” Edwards is heard exclaiming as the man collided with the rock and tumbled downwards.

“Is he just hanging there?” one of Edwards’ family members is heard asking.

“He just slammed into that thing hard, and then started to fall straight down,” Edwards recounted. “And he was probably 200 to300 feet above the ground when he first hit the cliff.”

“My guess is that he fell close to 100 feet before hitting a ledge, and then that chute snagged on the ledge — miraculously — because on those cliffs, there’s really nothing to snag on. And there happened to be a little outcropping there,” he continued.

The family said they flagged down a driver and asked them to call 911 as soon as they were able to get phone service.

“The two successful BASE jumpers ran up to the base of the cliff, and they were standing there dumbfounded, and there were a few on top, and everyone is just looking in horror, like, how do we save this guy?!” Edwards told the station.

“Somebody from search and rescue climbed up the cliff, but that was amazing because there was no crack, no obvious route to get there, and so they had to set pins to even get up there.

“Somebody miraculously got up there and then got the guy — we couldn’t quite tell from the distance if he was conscious or not — but got him on another rope and lowered him down to the ground.”

Base jumpers were gathered in the area that weekend for the annual Turkey Boogie event, which ironically raised money for Grand County Search and Rescue, the agency that brought the jumper to safety, according to organizers.

Grand County officials told the local outlet that its rescue team also responded to two other BASE-jumping incidents that weekend.

Grand County Search and Rescue did not immediately respond to a request for comment Thursday morning.

The condition of the jumper was unknown.