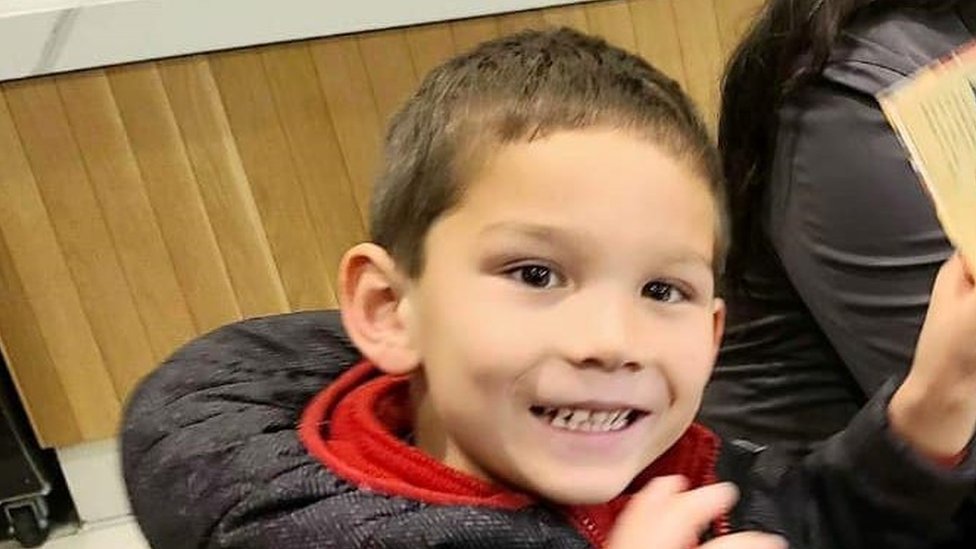 Before five-year-old Kyle Doan went missing, swept away by a brutal winter storm pounding central California, he told his mother to be calm.

Kyle and his mother, Lindsy Doan, were on the way to his school, when surging floodwaters overwhelmed their car.

Nearby residents in San Miguel heard Lindsy’s shouts and came to her rescue, but Kyle was pulled away by the water.

“Yesterday I got to the point where I think I ran out of tears,” said Lindsy Doan.

“I just don’t know what to expect anymore. I mean, I’ve tried to do a Google search: How long can a child not eat? How long can they be in wet clothes? We’re worried because I don’t know if they’re going to be able to find him.”

Authorities have been searching for Kyle since Monday and more than 100 National Guard officers have been joined by the San Luis Obispo’s Sheriff’s office, along with underwater search and rescue teams.

Rescuers are combing through piles of driftwood and debris for the 4ft, 52lb (23kg) boy with hazel eyes and blond hair. All they have found so far is one of his blue-and-grey Nike tennis shoes.

At least 18 people have died in the storms that have battered the state for weeks, according to the governor’s office.

California has seen almost two weeks of gale-force winds, floods, power outages and forced evacuations. Most of the land throughout the state is drenched, thousands of trees have been downed and roadways have been rendered useless by mudslides and snow.

Since Wednesday, the extreme weather has taken a short pause in much of the state, giving momentary relief to residents as they brace for the rain’s anticipated return.

A new round of atmospheric rivers are predicted to visit the Golden State on Friday. These weather phenomena – which cause serious damage – occur when water evaporates into the air and is carried along by the wind, forming long currents that flow in the sky like rivers flow on land.

A large cyclone wall moving north along the West coast will bring rain to swathes of northern California and Pacific coast states Oregon and Washington, the National Weather Service (NWS) said on Thursday, with the storm extending through the weekend.

Officials in central California have urged residents not to lower their guard in the midst of this weather reprieve.

The Monterey County Sheriff’s Office issued new evacuation orders on Wednesday, with Sheriff Tina Nieto warning that the Monterey Peninsula “may become an island” with the coming storms.