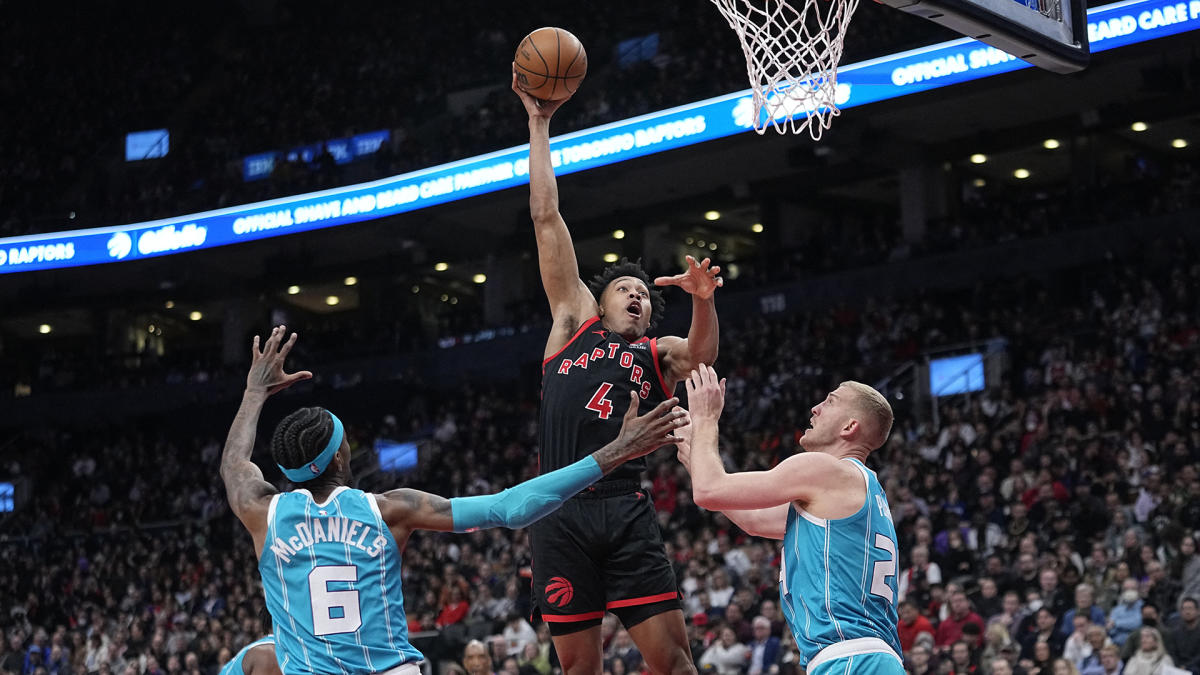 Over the course of the Raptors’ losing stretch in December and January, head coach Nick Nurse repeatedly mentioned how it’s taken Barnes longer to find his rhythm and attack the rim — often opting for harder shots on the perimeter to start matchups. That wasn’t the case for Barnes versus the Hornets.

Instead, he attacked the paint early, set tough screens in pick-and-rolls, and found teammates with his elite court vision. It pushed Toronto to a third straight win — a first for the 2022-23 campaign.

“That does a lot, especially just the way he did it with such pace early in the offence,” Nurse said post-game. “I think that really just ignited our pace in general.”

Nurse noted Barnes found teammates for 3-pointers out of the paint, especially as he rolled to the basket, helping set up quick actions with his speed as the ball kept moving.

“That’s hard to guard when you’re playing with that kind of pace. And I think he set the tone for that,” Nurse said.

Barnes finished the night with 21 points and a game-high nine assists. Another game-high was his plus-15 differential, while no other Raptor finished with over a plus-6.

Instead of settling for pull-up jumpers, which he says he can get “whenever he wants,” the reigning Rookie of the Year wanted to take advantage of the Hornets being high on the ball screen in their matchup.

Right from the jump, Barnes was aggressive, helping the Raptors push the ball “side to side,” but also toward the paint. His first four field goals were dunks, while he repeatedly found teammates for easy buckets in the paint, or on kickouts after collapsing the defence for shots on the perimeter.

The third quarter was equally eventful for Barnes. Along with getting poked in the eye — which forced him to the floor for an extended period — he threw down another nasty slam.

Barnes’ ability to find his teammates was part of an overall trend for the Raptors, as they finished with 30 assists — even though Nurse says it could have been 40 with all the solid possessions they created.

The Raptors have recorded 62 assists over their past two contests — the most in a two-game stretch in the 2022-23 campaign.

This time around against the Hornets — after also beating them on Tuesday — the Raptors deployed a steady dose of pick-and-rolls. Nurse says that was a concerted effort, as they tried to run that action in the middle of the floor, then hit the roller to put pressure on the paint, allowing them to either continue their attack but also push out.

The game plan helped the Raptors hold a lead all night Thursday, often pushing it into double digits. The Hornets were able to bring it down to seven multiple times in the third and fourth quarters — and even as few as five with 1:39 to go in the final frame.

Just like Tuesday night, it was the Hornets’ backcourt tandem of LaMelo Ball and Terry Rozier that led the charge. The former scored 32 points with seven assists, while the latter contributed 21 points.

However, the Raptors’ defensive intensity prevailed, and was consistent with both its starters and bench players. For the third game in a row, no Raptor logged over 40 minutes — a rare feat throughout 2022-23.

Precious Achiuwa provided another spark off the bench as he regains his rhythm after missing 24 games from November to the end of 2022. The centre finished with 10 points and a career-high five steals, as Nurse says he continues to look to ramp up his minutes.

Barnes also continues to be unique on the defensive end, as he becomes more comfortable guarding the other team’s biggest player — oftentimes their centre.

“I feel like I’m a big guy as well, I got some muscle on me. It’s just about playing with some heart and physicality as well,” said Barnes, noting that he tries to always box his man out, but also push the pace since a lot of big men don’t like running the floor.

With the win, the Raptors improve to 19-23, good for 11th in the East, as they pick up back-to-back victories over the Hornets, who hold the worst record in the conference.

The Raptors have their worst record through 42 games since the 2012-13 season, but are now 5-5 in their last 10 and are looking upwards as they try to put another bad first half of the season behind them.