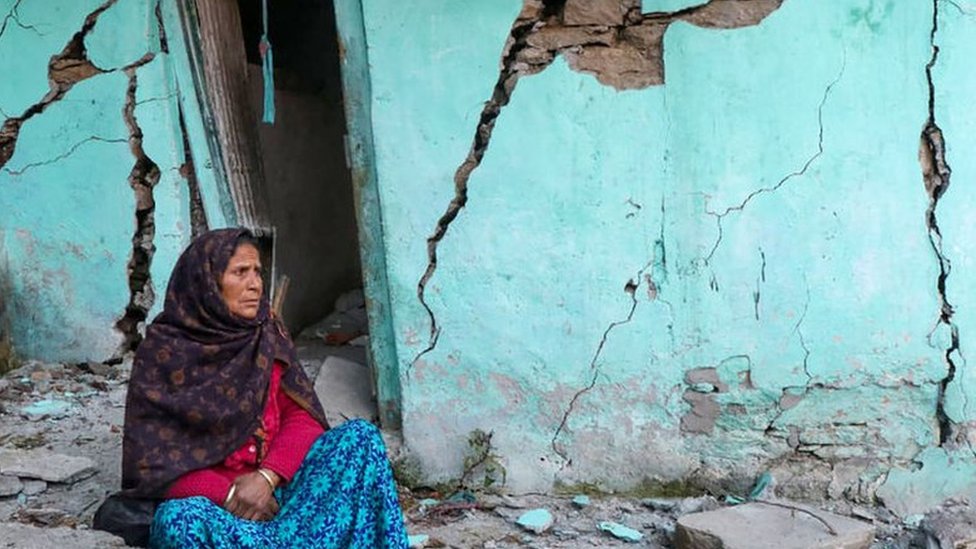 Thousands of people in the north Indian town of Joshimath are cooped up in camps after their homes developed alarming cracks in the past few weeks. BBC Hindi’s Vineet Khare speaks to the evacuated families.

Anshu Rawat was in deep slumber on 3 January when she heard a loud noise.

She thought she was dreaming, but when the cries grew louder, she decided to check.

Outside, she witnessed chaos. People were running around in a state of panic. Some were carrying their children in blankets along with small bags.

There were rumours that a nearby hotel had caved in. But when her husband stepped out to check, the building stood intact.

It was their house that had suffered damages though – its walls and veranda had developed gaping cracks.

Dazed and confused, Ms Rawat, 27, grabbed her six-month-old daughter and rushed to the rooftop, along with her husband and in-laws.

It was freezing cold. “I was wearing flip-flops and had no woollen cap to cover my head. My daughter just had a jacket on and she cried all night,” she said.

But the family waited for the night to pass.

The next day, they gathered their belongings and moved out, leaving behind their sprawling nine-room house and a lifetime of memories.

The family of five now lives in a temporary shelter – a crammed one-room accommodation – provided by the local government.

The room has a cooking gas cylinder, some kitchenware and a couple of beds where some family members sleep at night. Her husband and brother sleep on the floor.

The family wonders if they’ll ever be able to go back home.

“It was painful to abandon the house,” Ms Rawat said. “The agony of losing a home cannot be explained.”

Her family is among hundred others who have been shifted from their homes to schools, hotels and homestays, after cracks developed in more than 670 buildings in the Himalayan town of 20,000 people.

Experts say the town faces the danger of sinking, which they attribute to unplanned development and a lack of proper drainage system.

Over the last few weeks, disaster response teams have evacuated hundreds of residents and moved them to safer locations. It’s not clear how long these families would have to stay in the new lodgings. Authorities say their priority for now is to save lives.

“If there are relocations within Joshimath or some other place, this will involve talking to all stakeholders, but we are expediting the process and we will ensure that it is done as quickly as possible,” district magistrate Himanshu Khurana told the BBC.

But it’s never easy to leave behind your house, belongings and livestock unguarded.

Some residents are choosing to return to their homes during daytime to cook and tend to their livestock, before going back to their temporary residences in the evening.

It’s a depressing routine and people say they feel homesick and anxious about their future.

Some of them worry about the possible size of a relief package and are demanding a written assurance from the government.

A parent, who preferred to remain unnamed, complained about the impact of the crisis on his son’s studies and mental health.

“My son’s Class 10 exams are around the corner. How can he study like this? The government needs to act fast,” he said. “We want to live properly”

Hemlata Rawat and her son occupy the adjoining room of the same block.

On 2 January, she abandoned her 10-room, 18-year-old house built by her late husband. She carried two beds, two cupboards, a sofa and some kitchenware to the camp dwellings.

“It’s tough once you step out of the comfort of your house,” she said. “We wanted our children and grand-children to grow up there.”

She too hopes that the government would compensate her adequately for the loss, so the family could shift to a place of their liking.

Residents also complain about the quality of facilities available at the shelter homes.

Mandodari Devi said the water supply was erratic, and it was too cold without a room heater. Authorities say they are trying their best to make the residents’ stay comfortable.

But Ms Devi misses the warmth of her home. Not long ago, she had fitted new tiles in the bathroom of her two-storey house.

“But all that seemed a waste now,” she said.