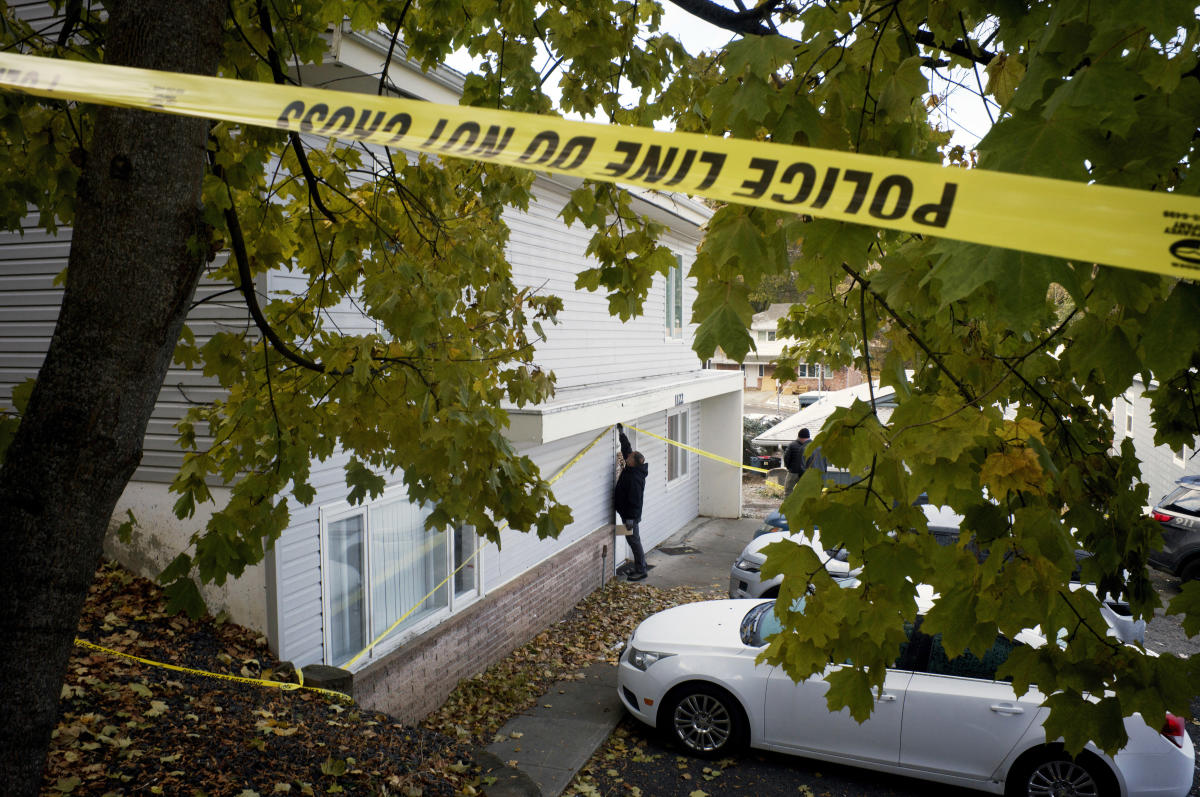 MOSCOW, Idaho — A criminology doctoral student charged with stabbing four University of Idaho students to death had written years ago of having suicidal thoughts, not being able to feel emotions and observing his own life as if it were a video game, saying he could do “whatever I want with little remorse.”

The new revelations about the suspect, Bryan Kohberger, come from posts he made on an online forum in which he discussed his mental health struggles, as well as from interviews with those who knew him and messages he sent to friends that were obtained by The New York Times. They paint a portrait of an anxious, isolated and depressed teenager who turned to heroin use before eventually getting clean and becoming fascinated with studying criminal psychology, saying then that he hoped to one day provide counseling for high-profile criminals.

“I feel like an organic sack of meat with no self worth,” he wrote in 2011, when he was 16, adding later, in the same post: “As I hug my family, I look into their faces, I see nothing, it is like I am looking at a video game, but less.”

Sign up for The Morning newsletter from the New York Times

Now, Kohberger, 28, is facing murder charges, accused of sneaking into a home shared by students just off the university campus in Moscow, Idaho, and stabbing four of them to death, in the middle of the night. At the time of the killings, Kohberger was in the first semester of his doctoral program at Washington State University, a 15-minute drive from the crime scene.

He has maintained his innocence through his lawyer, and on Thursday waived his right to a speedy preliminary hearing. A judge set a June date for the hearing, when prosecutors will outline evidence in an attempt to prove they have probable cause to try him on murder charges.

The police have disclosed some of the evidence that led them to arrest Kohberger at his parents’ home in the Pocono Mountains of Pennsylvania, saying they had relied on DNA from a knife sheath left on a bed with two of the victims, cellphone records that suggest his phone had been in the area a dozen times before the murders occurred and surveillance footage of a white Hyundai, like the one Kohberger drove. But the authorities have not outlined any motive for the killings, leaving families of the victims and acquaintances of the accused killer searching for answers.

“It’s wild,” said Jack Baylis, a Pennsylvania friend of Kohberger’s who is among those trying to understand how Kohberger came to be charged with such a heinous killing. “Bryan himself would’ve been fascinated by it.”

In online posts by Kohberger dating from when he was a teenager, he berates himself and describes feeling disconnected from society, unable to find meaning in life. He describes an array of mental health challenges, including anxiety, depression, depersonalization, lack of emotion and the “constant thought of suicide.”

The words were posted on a forum website called Tapatalk, previously known as Yuku, where Kohberger commiserated with other users while suffering from a little-understood neurological condition called visual snow, in which a person’s vision is obscured by scattering dots, much like the static seen on an analog television.

Kohberger did not use his name on the website, but the posts included a reference to his birthday. In addition, the username on the account, “Exarr,” matches an email address for Bryan Kohberger that appeared in a 2009 leak of accounts from an online payment company; that account listed his location as Effort, Pennsylvania, the place where Kohberger grew up. Some of the posts also contained details that friends said matched their recollections of his behavior and struggles at the time.

Friends have previously described Kohberger as having an intellectual bent, but said he occasionally turned cruel and angry. At Washington State, his peers said he rankled some people with a habit of overexplaining, and sounded particularly condescending when he spoke to his female classmates.

The online posts from his teenage years provide a deeper insight into what appeared to be a dark period of his life. On the forum website, Kohberger wrote that he saw a “sickly, tired, useless and stupid man” when he looked at himself in the mirror, and felt that he did not deserve to live. He also lamented treating his father “like dirt” though he considered him a good man.

Kohberger said that his absence of emotion had begun about the same time as his visual snow symptoms, in September 2009, and one friend recalled him constantly talking about his fuzzy vision.

“I know it was something that really bugged him,” said Thomas Arntz, who was friends with Kohberger during high school, until they had a falling out. “He was basically to the point where he was neurotic about it.”

Dr. Francesca Puledda, a neurologist and researcher at King’s College London who specializes in visual snow, said it is so little understood that there is debate among scientists over whether to call it a disease. But Puledda has worked with people who find the condition to be debilitating.

“We still don’t know what causes it,” she said. “We simply have to do more research.”

Puledda said that the presence of visual snow is not a sign of mental illness, but noted that one research team found that people who have the syndrome also report a high incidence of psychiatric issues, such as anxiety, depression and depersonalization.

Kohberger wrote that he had tried anti-migraine medication, visited a neurologist and gone on a strict diet — one that avoided sugar and starch — to try to resolve the vision problem.

“He wouldn’t eat any bread and he would only eat certain fruits,” Arntz recalled. “It was very restrictive.”

By 2012, it appeared that Kohberger was learning to live with the problem. Sounding more optimistic, he wrote on the forum that he had accepted his ailment and was coming to terms with it.

He graduated from high school in 2013 but had also begun to use heroin around that time, friends said.

Rich Pasqua, who graduated from high school a few years before Kohberger, said they used heroin together in 2013 and 2014, at a time when they both worked at a pizza shop called New York Pizza Girl, in Effort, Pennsylvania.

Pasqua, now 31, recalled that Kohberger was socially awkward and did not appear to have many friends, frequently calling him and offering to share his marijuana. Pasqua, who said he is now sober and working at a rehabilitation center, recalled in one instance driving with Kohberger through the gated community where Kohberger’s parents lived, trying to evade a private security guard.

“We would make it to a cul-de-sac and we’d see their orange lights and Bryan would be like, ‘Go this way!’” Pasqua recalled. “He was like, ‘We’re going to get in so much trouble.’”

Pasqua said his wife, who was in Kohberger’s year, remembered that Kohberger had been heavier when he was in high school and was bullied over his weight. (Kohberger wrote in the online forum in 2011 of having lost half his body weight.) And Pasqua recalled teasing him on one occasion as well, telling Kohberger to walk to the private community’s gates in the snow to get some heroin from him, only to not be there when he showed up.

Eventually, Pasqua said, Kohberger’s father would pick up the phone when he called, once saying that his son was “on a top-secret mission,” which Pasqua realized meant he was in rehab.

Years later, Kohberger appeared to be doing much better, studying psychology at DeSales University in eastern Pennsylvania and telling one friend that his drug problems were in the past.

“I only used when I was in a deep suicidal state,” Kohberger wrote in May 2018 to Baylis, with whom he had been friends since eighth grade. “I have since really learned a lot. Not a person alive could convince me to use it.” Kohberger followed up later that day, telling Baylis he had been off drugs for two years and telling him to not mention his drug use again, according to screenshots of their conversation on Facebook Messenger.

He told Baylis at one point that he thought he had been depressed since he was 5 years old, for so long that he had “developed a weird sense of meaning.”

In one message from October 2018, Kohberger wrote that he was interested in studying criminals. He said he would like to be involved in capturing violent criminals but that it could be difficult to get a job like that.

“I’m thinking more along the lines of dealing with high-profile offenders,” he wrote. “Counseling.”

Among the details that emerged in a police affidavit last week was that Kohberger had, last fall, applied for an internship with the Police Department in Pullman, Washington, where he was living while studying at Washington State. Officials have declined to say whether he got the internship.

The University of Idaho victims — Madison Mogen, 21; Kaylee Goncalves, 21; Xana Kernodle, 20; and Ethan Chapin, 20 — were killed after spending a typical Saturday night around town, with two of them going to a party and two others going to a bar before returning home in the early morning hours. Investigators believe all four were killed shortly after 4 a.m.

Two more roommates were at home at the time of the attack but were not hurt. One told police that she had heard crying and voices around 4 a.m., and had opened her bedroom door to see a man — wearing black clothing and a mask — walking by her toward the home’s back door, according to a police affidavit. The roommate locked herself in her room, and it is unclear what she did after that, but no one in the apartment called 911 until just before noon.

Shanon Gray, a lawyer for the family of Goncalves, said family members have been searching for information that might show a connection between the victims and Kohberger, but that no link has emerged.