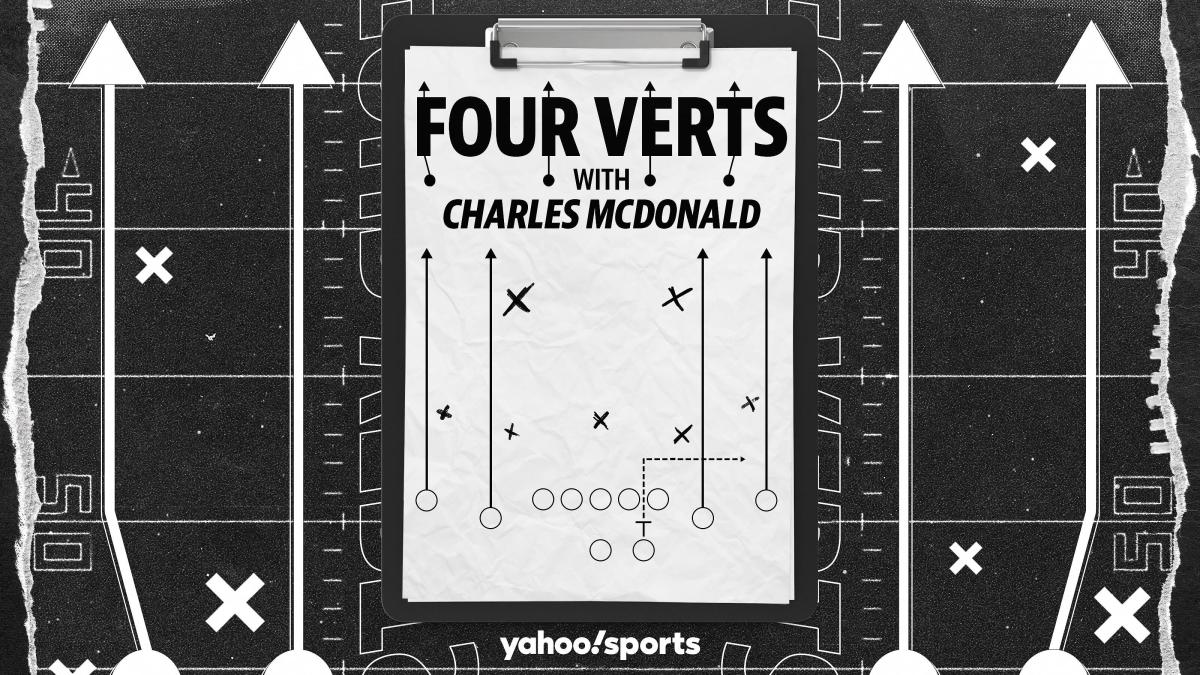 The playoffs are here, so naturally, this this week’s edition of Four Verts, we’re going to spend time talking about two high-profile NFL figures that aren’t in this year’s playoffs. The Rams got their lead man back, the Raiders had a player snubbed from the All-Pro team and a few injuries are really going to hurt the AFC playoff race.

Sean McVay is back! The 36-year-old, Super Bowl winning head coach has decided he won’t become the great millennial of all time, opting to continue working instead of taking some time off to enjoy the millions of dollars he’s made. On a serious note, this clears up the Rams’ immediate future and makes their situation feel a bit more hopeful than it did this season.

It’s easy to see why McVay was waffling on coming back to the Rams and submitting to the grind of another NFL season. The Rams just played the most inconsequential season of all time. They were fresh off of a Super Bowl, they don’t own their first-round pick for next season (which would be sixth overall) and all of their superstars, except for Jalen Ramsey, were hurt en route to a 5-12 finish. The Rams could have not played this season and ended up in the exact same situation that they’re in right now. That’s a lot of work to get through a season that has no tangible football benefit by the end of the year. A lot of people might question what they’re doing with so few results to stand on.

However, McVay is back, which really benefits the Rams as they start to shape what the next era of what their franchise looks like. They clearly need to do some retooling over the next few years to get back to running the NFC and that was going to be nearly impossible without McVay leading the team. He is easily one of the elite head coaches in the league and basically has been since he took over the Rams in 2017. He’s been able to adapt and change his offense based on the personnel and won a Super Bowl. McVay has become synonymous with the Rams and they would be hard pressed to find someone better if he had actually decided to step away from the team.

This team still has holes, and will continue to be a top-heavy roster over the next season, but at least they have a chance to maximize their talent with a top-flight head coach. They’ll get quarterback Matthew Stafford, wide receiver Cooper Kupp and defensive tackle Aaron Donald back next season, which will obviously increase their chances of getting back to the playoffs and being a feared team. As long as the Rams have their elite core of players, it’s still an enticing job. Those players’ presence had to matter as far as being able to retain McVay.

Now the Rams can focus on competing in 2023 instead of pondering a tear down that would reset the clock on this franchise. Who knows how long McVay will stick around, but for now, this a great sign of things to come for the Rams.

Star wide receiver Mike Williams is officially out for the Chargers’ playoff opener against the Jacksonville Jaguars, which was a totally avoidable outcome. In a meaningless Week 18 game, Chargers coach Brandon Staley opted to play his starters against the Broncos, which backfired in a serious way. Williams suffered a fracture in his back and will likely be out for the Chargers’ playoff run. Given that the Chargers were locked into the fifth seed no matter what happened in their season finale, playing Williams and other Chargers starters was just an incomprehensible idea.

Staley attempted to soften the blow on Williams’ injury after the game by saying that the Chargers needed to dress 48 players, but that really doesn’t make a whole lot of sense. Week 18 is a great chance for practice squad players to get in the game, which is what the Giants did for their also-meaningless Week 18 matchup. The Giants had most of their starters on the inactive list and they’ll be at full-strength for their rematch against the Vikings in Sunday’s wild-card playoff game. The Chargers will be missing their top wideout for really no reason.

Williams is a necessary piece for the Chargers if they want to have a prayer of making it deep into the postseason. Keenan Allen is still a solid receiver, but he’s not the dominant threat he used to be. Without Williams, the Chargers suddenly have a very limited group of wide receivers that won’t post a threat to many secondaries in the playoffs. They have a chance as long as Justin Herbert is under center, but the degree of difficulty on what he has to accomplish has definitely risen with the loss of Williams.

All of this was avoidable and Staley should definitely feel some heat for that. Williams is too important of a player to risk in a game that doesn’t affect playoff seedings whatsoever. It was an unnecessary risk and now they’re going to have to suffer the consequences for it. Even if Herbert is able to drag this team on a playoff run, the actions that made his life difficult shouldn’t be forgotten. If they lose, people might start calling for Staley’s job given the decision that he oversaw.

Staley has been a risk taker on the field since he’s been a head coach, but this is a set of dice he simply didn’t have to roll.

Maxx Crosby was snubbed from the All-Pro team

In a season with a lot of good edge rushers, not everyone was going to be on the All-Pro team, but leaving Raiders pass rusher Maxx Crosby off the list is an egregious oversight. Crosby was absolutely one of the four best pass rushers in the league this season and was one of the few bright spots on a Raiders team that really struggled in 2022. Crosby should be in consideration for Defensive Player of the Year, but he didn’t even make the All-Pro team. That’s a big miss.

Crosby started all 17 games for the Raiders and finished with 12.5 sacks, which is incredibly impressive considering the Raiders only had 27 sacks as a team. That means 46.2% of the Raiders’ sack production came from one player. No one else on the Raiders finished with more than 4.5 sacks and only three players on the team were able to record multiple sacks — Crosby (12.5), Chandler Jones (4.5) and Clelin Ferrell (2).

Perhaps Crosby was dinged for not playing on a good defense, but that should just make his season even more impressive. No Raider played more snaps on defense this season than Crosby. According to Pro Football Reference, Crosby played 96.3% of the Raiders defensive snaps. That workload is unusual for a defensive lineman, but Crosby was able to stay productive throughout the whole season for them. It’s an iron man feat as much as it is a skill and production feat.

Crosby is one of the best pass rushers in the league and produced well in an impossible situation. Snubbed! Don’t worry, Maxx, real ones know just how great of a season you had.

A couple games this weekend went from enticing to blowout-watch with a few injuries. The Ravens are going to miss Lamar Jackson this weekend as he continues to recover from a knee injury and the Dolphins are going to be without both Tua Tagovailoa and Teddy Bridgewater as they travel to Buffalo. That is a huge, huge bummer for what projected to be fun matchups with those quarterbacks under center. The biggest problem as far as excitement goes is the fact that we’ve already seen these teams without their star quarterbacks.

The Dolphins are going to be relying on rookie quarterback Skylar Thompson to come through in the clutch for them against one of the best teams in the NFL in the Buffalo Bills. Thompson may develop into a solid backup, but that hasn’t happened yet. As great as the Dolphins offense has been this season, they really fall off a cliff when Thompson had to step in as the lead quarterback. They just scored 11 points against the Jets to clinch their wild-card spot, which was just enough to win. Thompson was only able to muster 17 points in a blowout loss against the Jets earlier this season as well. There’s just no reason to believe that the Dolphins will be able to score points against the Bills with Thompson. If the Dolphins are able to win this game, they should build a statue for head coach Mike McDaniel.

The Ravens will be taking on the Bengals with either Tyler Huntley or Anthony Brown leading their offense. No offense to Anthony Brown, but he did just play against the Bengals a week ago. The results were not pretty and, quite frankly, it’s not fair to expect a whole lot from him as far as this game goes. He was an undrafted free agent for a reason and didn’t have a whole lot of NFL prospects coming out of the University of Oregon last year. Playoff games are way too precious and the Ravens won’t have one of the most electric players in the NFL at their services. That stinks for the Ravens and spectators of the game.

Hopefully Huntley will be able to suit up for the Ravens so they at least have a chance to score some points, but the Ravens offense has been a diminished version of itself without Jackson playing quarterback. That’s an unavoidable fact and it lessens the hype for wild-card weekend.

The outlook of Bengals-Ravens and Bills-Dolphins is greatly changed with the way their injuries have unfolded at quarterback. We can only hope, as an NFL watching public, that Tyler Huntley, Anthony Brown and Skylar Thompson can play at a level we haven’t seen yet.

At least we get to watch Patrick Mahomes play for the Chiefs next weekend.