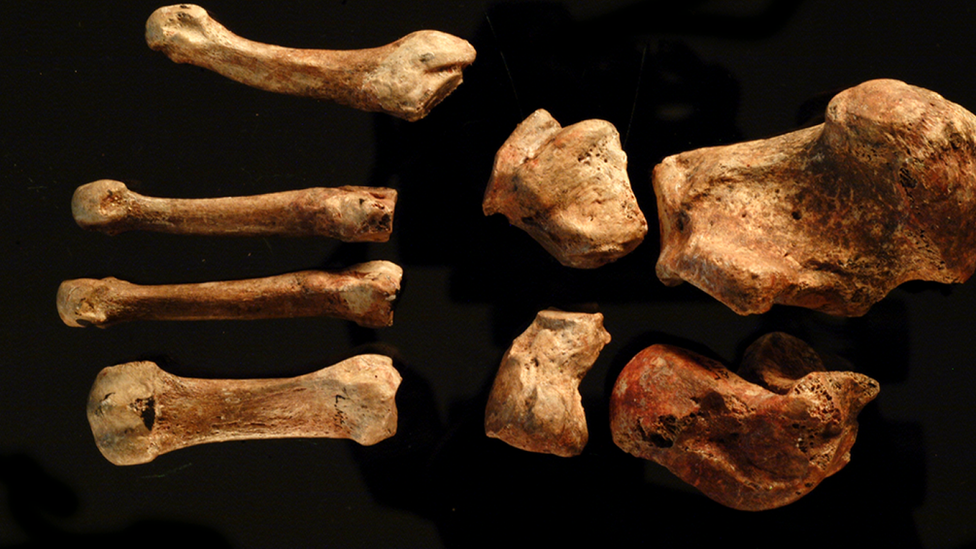 Two-hundred years ago scientists unearthed one of the most intriguing and controversial finds in Welsh archaeological history.

On 18 January 1823, The Red Lady of Paviland was discovered in a cave on the Gower peninsula, Swansea, by William Buckland, a reverend and Oxford University’s first ever professor of geology.

“She” was immediately transported to the Oxford University museum, prompting a two-century campaign for the remains to be repatriated back to Wales.

Yet, for at least the first century after the discovery, no-one was entirely sure about what they’d found.

A skeleton covered in red ochre, which is naturally occurring iron oxide, Prof Buckland presumed The Red “Lady” to be a Roman prostitute, or witch.

However, further investigations over the centuries have revealed “she” was a “he”, and in fact dates from between 33,000 and 34,000 years ago.

But Prof George Nash, of the University of Liverpool and Coimbra University in Portugal, believes we should guard against judging Buckland too harshly.

“In 1823 the science of archaeology was very much in its infancy,” he said.

“There was no careful stratified removal and recording of artefacts, great quantities of material were just hoiked out of the ground and dumped in a massive jumbled pile by unskilled labourers.

“There were indications that the skeleton could have been a woman due to the amount of seashell beads and ivory wands discovered around her.”

Prof Nash, who is also convener of the Welsh Rock Art Organisation, added: “You also have to bear in mind that Buckland was a clergyman and a creationist and – almost half a century before Darwin – his conclusions wouldn’t have seemed that outlandish at the time.

“He wasn’t a literalist, he believed that the seven days creation of the bible was a metaphor for seven billion years of the world’s development, but this assumption did lead him to make some massive errors in his dating.”

The first breakthrough in the quest to establish the Red Lady’s true identity came in 1912, when archaeologist William Solace revisited Goat’s Cave in Paviland where “she” had been discovered and found flint arrow heads and tools.

Solace concluded, correctly, that he, in fact, had been a hunter-gatherer or warrior during what is commonly known as the last Ice Age, though over the last 100 years his date has been pushed back from the Mesolithic period (4-10,000 BCE) to the Palaeolithic era (35,000/10,000 BCE).

Prof Nash said this fits in better with what we know of the climate and landscape at the time.

“It’s likely that many of the early attempts at carbon dating were contaminated by modern DNA rubbing off the fingers of the scientists handling the exhibits,” he said.

“It’s only in the 1980s that we start to get a more reliable date, and even that has been finessed over the years as technology has improved.”

Prof Nash added: “33,000 years ago makes much more sense, as it falls during the warming period before the last Ice Age, when the Welsh ice cap was beginning to expand within mid Wales, and eventually covering the whole of Wales.”

He explains that the Gower landscape would have looked very different in those days, with sea-levels having retreated so far it would have been possible to walk from Northern Africa all the way to southern England and then over the Bristol Channel into the few navigable sections of south Wales.

“The Red Lady and his cohorts were most likely tracking herds of Mammoth, deer or bison, and the ritualistic nature of his burial shows one of the earliest examples of spiritualistic thinking in Western Europe.”

Lord Davies of Gower, formally Byron Davies MP for Gower, has long been a campaigner for the Red Lady’s remains to be brought back to Wales.

“I was brought up in Port Eynon, just down the road from Paviland, so I was always fascinated by the story, but when I went to Gowerton Grammar School my English master got me even more interested and I went to visit the cave for myself.

“As a politician I started to get involved in the campaign to bring the Red Lady back to Wales, but given how delicate the remains are, and the cost involved in finding a permanent home in Wales, I’m not sure it’ll ever happen.”

Lord Davies admits that given the cost-of-living crisis local councils and the Welsh government probably have more pressing demands on their finances, though he said he would never entirely give up on his dream.

But Prof Nash cautions against the “Welsh Mysticism” which has been created around the Red Lady over the years.

“Some have attempted to portray the remains as some sort of ancient Welsh ancestor, which is palpable nonsense,” he said.

“Whoever he was, he was almost certainly of African or Arabian distinction, fleeing conflict or over-crowding in his more hospitable homeland.

“What’s more, after the brief thaw of the Palaeolithic era, Wales was cut off again for several thousand years, so there’s absolutely no chance of these remains having any genetic or cultural relationship to any modern Welsh person.”

Yet Prof Nash does agree with Lord Davies in some respects.

“He may not be part of our genetic lineage, but he is a significant part of Welsh History.

“If there was a way the remains could be brought back to Wales safely – and that’s a very big ‘if’ – I think it would definitely be the right thing to do.”