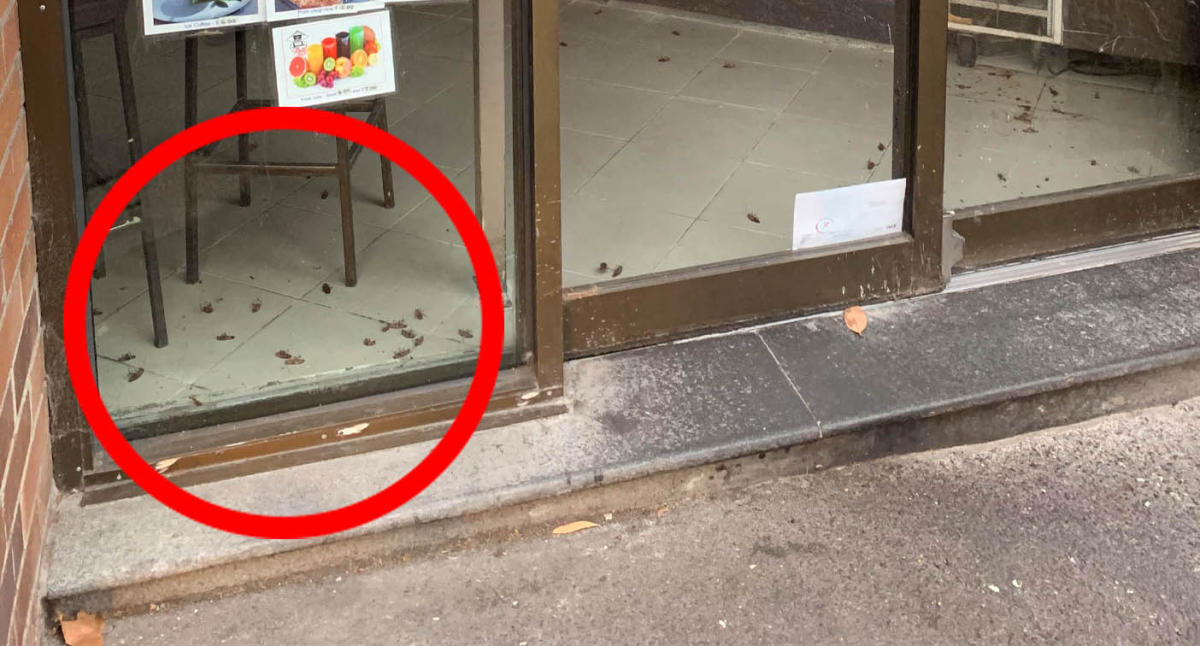 A Sydney restaurant will be investigated by authorities after dozens of dead cockroaches were seen scattered across its floor.

It comes as a pest control expert warns Australian business owners to stay on top of their pests after La Niña has provided perfect conditions for cockroaches “to thrive”.

Vietnamese eatery Roll In & Out in inner-city Surry Hills has been closed over the summer break while the owners went on holiday, with plans to reopen the business on January 16.

A woman from the restaurant told Yahoo News a Mortein insect control bomb had been set off while the shop was shut down, and on Thursday morning dozens of dead cockroaches could be seen across the floor by the door, window and the serving counter. It is unclear how long they’d been lying there.

A City of Sydney spokesperson confirmed it will inspect the premises and speak to the owner to ensure the premises is fit for food service.

“The City of Sydney takes the health and safety of our community very seriously and is contacting the owner of the establishment to arrange a thorough inspection,” they told Yahoo News Australia.

“We will then work with the business owner to remedy any issues that are identified and ensure the business is compliant before it reopens.”

Roll In & Out told Yahoo News setting off an insect bomb is a pest prevention method they undertake several times a year.

They said they were “shocked” to see the amount of dead cockroaches present in the store this time and were unaware such a sight had been left for the public to see. The woman stressed no food is currently on the premises and the store was cleaned on Thursday. She said Roll In & Out takes food safety very seriously and has complied with food safety standards for years.

The business speculated some of the cockroaches pictured had entered the store from the street and other units in the building.

Businesses warned to stay on top of pest control

Warren Bailey, director of ABC Pest Control Sydney, said while a large amount of cockroaches inside a premises is obviously not a good look to the public, he said it was a “good thing” they are dead, indicating the restaurant had undergone “some sort of treatment” to tackle pests.

He said recent weather conditions made for a perfect environment for cockroaches to breed.

“We’ve had the heat, we’ve had the rain and they just thrive on that,” he told Yahoo News Australia.

Mr Bailey said businesses should be aware such scenarios can occur and should be mindful of how quickly pests can intrude.

“That’s why regular pest control and cleaning are so important,” he said.

“In this case, they may have even had pest control completed, but have not cleaned up and left it and a passerby has become aware of the dead insects.”

Mr Bailey said a common mistake made by hospitality premises was not committing to regular treatment, a decision he says is influenced by how visible the threat is. Yet he warns businesses even if a premises appears pest-free, that is not always the case.