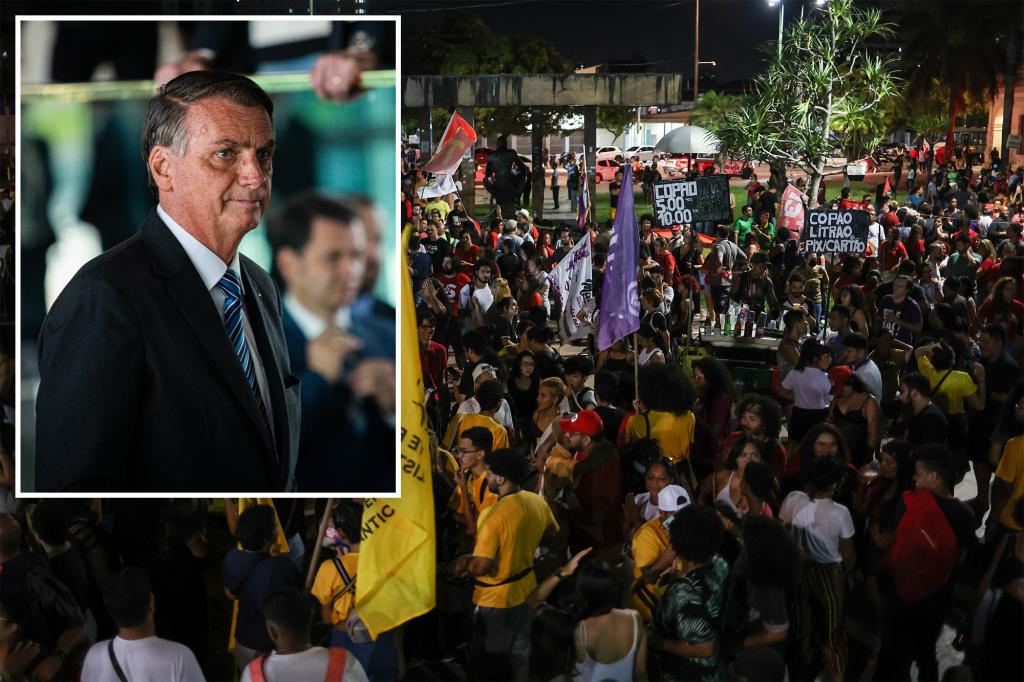 In a video posted on social media on Jan. 10, Bolsonaro said that election winner Luiz Inácio Lula da Silva was not democratically voted into office, but was chosen by the Supreme Court and Brazil’s electoral authority.

After weeks of violence, a team of prosecutors was formed to combat anti-democratic acts. The prosecutors argued that although Bolsanaro posted the video after the riot, its content warranted an investigation into his conduct before Sunday’s riot.

He removed the video the same morning it was posted and has remained otherwise largely quiet since losing the Oct. 30 election, choosing to skip his leftist opponent’s Jan. 1 inauguration and taking up residence in Florida since December.

De Moraes, one of Bolsonaro’s political rivals, wrote that Bolsonaro’s history of attacking Brazil’s government institutions, including the Supreme Court, “may have contributed, in a very relevant way, to the occurrence of criminal and terrorist acts,” according to The New York Times.

Leading up to his election loss, Bolsonaro repeatedly doubted the reliability of his country’s electronic voting system and pushed officials to invalidate millions of ballots cast using the machines. He never conceded.

Following the court’s late-night decision Friday, Bolsonaro’s attorney, Frederick Wassef, said in a statement that the ex-president “vehemently repudiates the acts of vandalism and destruction,” but said the riots were carried out by alleged “instigators” — a claim that his supporters have echoed.

Bolsonaro “never had any relationship or participation with these spontaneous social movements,” Wassef said.

Immediately after the riots, Brazilian authorities swiftly arrested over 1,000 protesters of an estimated 5,000 who showed up Sunday.

Authorities have since announced they plan to expand their prosecution efforts to businesspeople who may have paid for rioters to travel to the capital and security personnel who stood idly by as rioters infiltrated the Supreme Court, Congress and presidential palace to try and overturn the election.

Prosecutor’s have focused their attention on Bolsonaro’s former justice minister Anderson Torres, who was appointed the federal district’s security chief on Jan. 2 and was in the US on the day of the riots.

De Moraes ordered Torres’ arrest this week and has opened an investigation into his actions, which he described as “neglect and collusion.” The justice  said that Torres fired subordinates and left the country ahead of the riot, indicating that he was deliberately laying the groundwork for the unrest.

Torres was given three days to return to Brazil, or authorities will request his extradition, Justice Minister Flávio Dino said Friday.

“If by next week his appearance hasn’t been confirmed, of course we will use mechanisms of international legal cooperation. We will trigger procedures next week to carry out his extradition,” Dino said.

On Tuesday, Torres said on Twitter he would leave his vacation in the US to go back to Brazil to present his defense, however by Friday is yet to return.

During a search of Torres’ home, federal police allegedly recovered a draft of a decree that, if signed by Bolsonaro, would have seized control of Brazil’s electoral authority and forced new elections.

The origin and authenticity of the document are unclear, and it remains unknown if Bolsonaro or his subordinates took any steps to implement the measure that would have been unconstitutional, according to analysts and the Brazilian academy of electoral and political law.

The document “will figure in the police investigation, because it even more fully reveals the existence of a chain of people responsible for the criminal events,” Dino said.

By failing to initiate a probe against the document’s author or report its existence, Torres could be charged with dereliction of duty, Mario Sérgio Lima, a political analyst at Medley Advisors, told the Associated Press.

Torres said on Twitter that the document was likely found in a pile intended to be thrown away, and claimed it was leaked out of context to discredit him.

Dino told reporters Friday morning that no connection has yet been established between the capital riot and Bolsonaro. If Bolsonaro were found guilty of inciting a riot, he could face up to six months in prison, according to The Times.

Ibaneis Rocha, the district governor who was also in charge of security at the capital, is also being probed.  De Moraes suspended Mr. Rocha from his job as governor for at least 90 days.