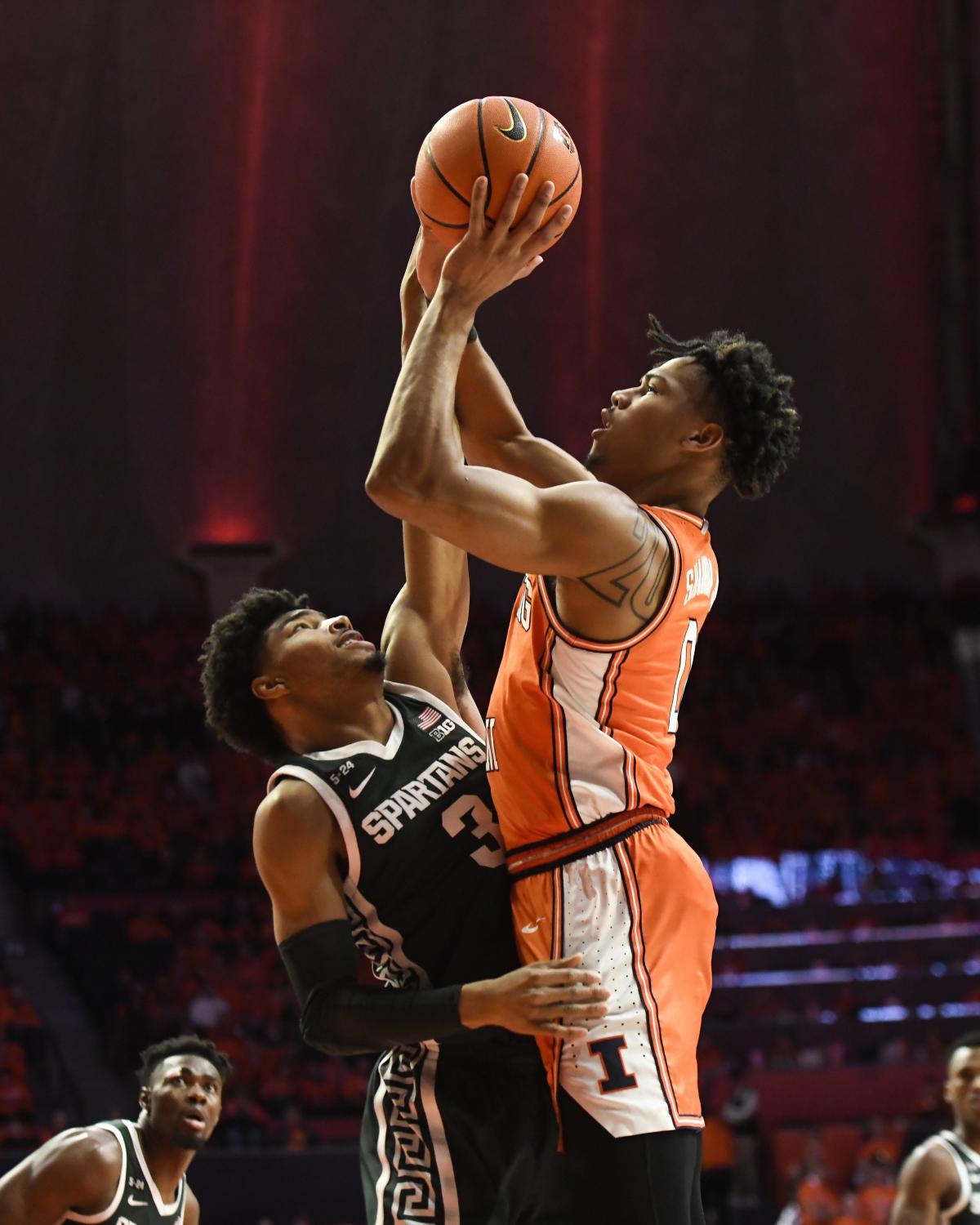 Yet the Spartans scrapped and clawed deep into the second half before a ferocious Illinois comeback ended their seven-game win streak, 75-66, on Friday night at State Farm Center.

After MSU took a nine-point lead with 14:13 to play, the Illini rallied following a technical foul on coach Brad Underwood for an 18-4 run to go up 59-54 with 7:28 to play. The Spartans tied it at 60-all, but Illinois’ Coleman Hawkins drained a 3-pointer and Dain Dainja put back another bucket. The Illini took over with an 8-2 closing run over the final 2:25 as MSU (12-5, 3-2 Big Ten) failed to connect late. The Spartans missed seven of their final nine shots after drawing even with 5:49 to play.

The Spartans also missed all seven of their 3-pointers and shot just 34.4% in the second half. It was the Spartans’ first game without a 3-pointer since an 0-for-9 performance in a road loss at Michigan on March 4, 2021.

A.J. Hoggard had 20 points, Tyson Walker scored 14, and Joey Hauser had 11 points and 11 rebounds. The Spartans couldn’t take advantage of a 42-30 rebounding advantage, and the Illini recovered with a 24-16 edge in paint scoring after getting dominated in the first half.

Matthew Mayer scored 14 of his 19 points in the second half comeback for a third straight win for Illinois (12-5, 3-3). Dainja had 20 points, and Terrence Shannon Jr. scored 17 points but just two in the final 30-plus minutes — two free throws to ice the game with 33 seconds left.

Despite a significant foul disparity for much of the first half — the Spartans had five, including a technical on assistant coach Mark Montgomery for arguing a no-call, before the Illini’s first at 12:24 — MSU scrapped its way through a physical first half.

Jaden Akins had two shots blocked early, and the Spartans committed four turnovers in the first 5:49 of the game. They struggled to stop Shannon as the 6-foot-6 Texas Tech transfer went around and shot over MSU defenders, scoring 11 of the Illini’s first 15 in building a five-point lead and reaching 15 points individually at 10:51.

Shannon wouldn’t score again the rest of the half.

The Spartans, however, continued to attack the basket with effectiveness. Hoggard penetrated for a layup, followed by two from Walker, to give MSU its first lead at 25-21. That prompted Underwood to call a timeout at 8:43 to stop a 15-4 run that included six straight made field goals.

It worked, and Illinois answered with a 7-0 run of its own.

Akins stopped it by finishing over Mayer, and then Carson Cooper made his 6-11 presence felt for a second straight game. The freshman center helped stabilize the defense in the paint and provided back-to-back buckets, including a rebound and layup and another finish through traffic on a Malik Hall wrap-around pass. That started a 10-2 run, and the Spartans carried a 37-33 lead into half.

Cooper topped his career highs with six points and four rebounds. Hoggard and Walker each had 10 points in the half, and MSU dominated inside with a 22-13 rebounding edge and a 28-14 scoring advantage in the paint.

The Spartans carried that momentum into the second half, building a nine-point lead thanks to more dominance on the glass. That allowed MSU to open a 48-41 lead that grew to nine points when Underwood got whistled for a technical foul with 14:13 left. Hauser hit the two ensuing free throws.

Underwood’s ploy worked. The Spartans got called for the next eight fouls, and the Illini rode the energy and momentum to rip off an 18-4 run in which MSU had few answers. Mayer scored 10 of those points, including a pair of 3-pointers that electrified the Illini’s hostile “Orange Out” crowd.

Izzo used two timeouts in that stretch. Hoggard helped stop the drought with a bucket out of the second, then hit another jumper in the paint. Walker scored to tie it, 60-60.

But the same comeback magic the Spartans showed at Wisconsin earlier in the week never materialized, as 3-pointers clanged out and the Illini pulled away with a finishing stretch.

Read more on the Michigan State Spartans and sign up for our Spartans newsletter.