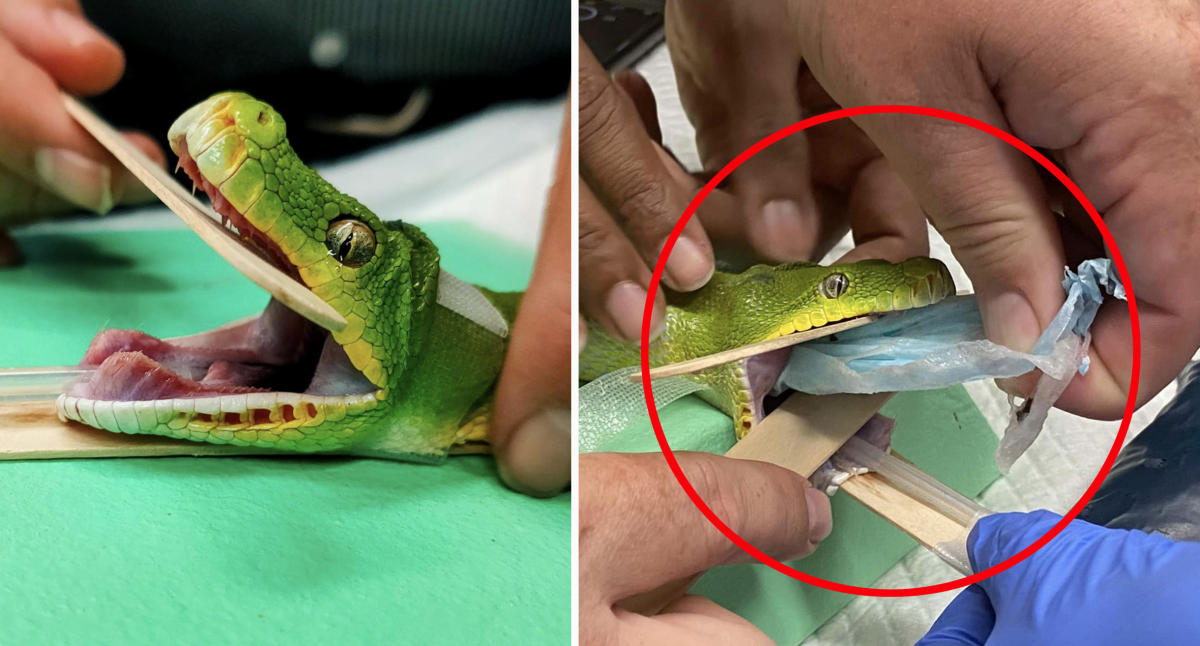 A snake in Queensland got more than she bargained for when she hunkered down for dinner time.

Gloria the green tree python was brought into the University of Queensland VETS Avian and Exotics Service with something unusual in her long green belly. She’d somehow managed to swallow an entire puppy pee pad along with her meal.

Given that 24 hours had passed since she’d “consumed” it, UQ Vets said the safest method of retrieving it would be to use an endoscope.

“Gloria was anaesthetised, intubated and placed on a ventilator so that the team could have full control over her breathing,” they wrote on Facebook. An endoscope with a grabbing attachment was then passed down the snake’s oesophagus until just before her stomach. It was there that the puppy pad was found.

“Through skilful coordination between Internal Medicine driving the endoscope and Avian and Exotics positioning Gloria and maintaining her anaesthetic, the puppy pad was slowly and steadily pulled out,” UQ VETS explained.

The experts used tongue depressors to prevent the puppy pad from getting stuck on Gloria’s backwards facing teeth, which the uni described as “an evolutionary trait that prevents prey and apparently also puppy pads from escaping her mouth.”

“Gloria recovered with no complications and went home that night, hopefully having learned the lesson that puppy pads are not food,” the vets added. “It just goes to show that sometimes danger noodles can be a danger to themselves.”

Late last year a terrified farmer in Thailand feared that an enormous 4.5 metre long python had swallowed a child after he spotted it with a bulging stomach.

“I saw the snake not far from the pig’s cage,” he said. “We also had chickens here but this one seems to have a big appetite and went for the bigger animals. I was afraid he’d eat the children next so I fled and called for help.”

After the village chief ordered a headcount of the local children, they discovered the 20 kilogram hog was missing from its enclosure, swallowed whole by the python.