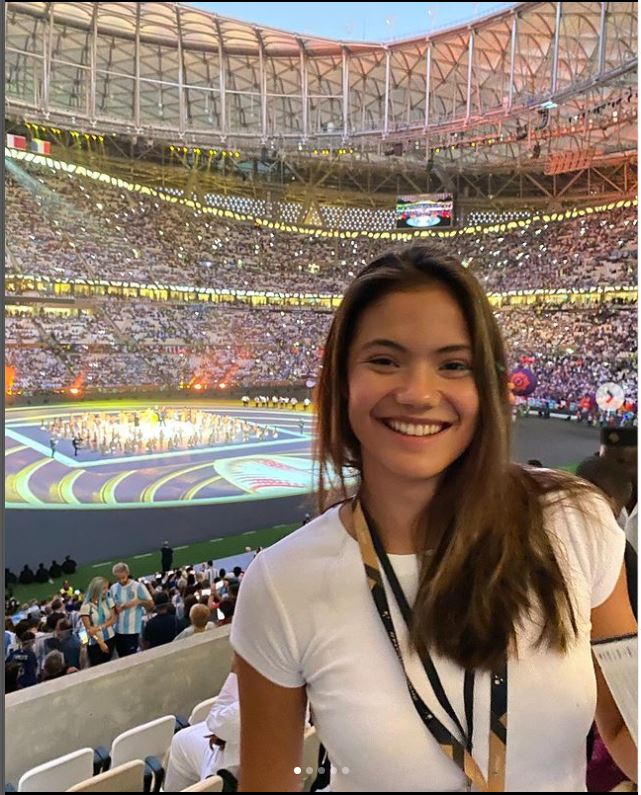 EMMA RADUCANU believes watching Lionel Messi and Kylian Mbappe slug it out in last month’s World Cup Final will help her handle the pressure of being a top tennis pro.

The Brit was appearing in an exhibition match in Abu Dhabi on Friday December 16 when the opportunity came up for her to attend the football finale in Qatar two days later.

One of 89,000 fans in the Lusail Stadium, Raducanu was thrilled to watch the magnificent 3-3 draw between Argentina and France in the 22nd World Cup final.

The contest went to penalties and captain Messi saw his countrymen win the shootout but the result left Frenchman Mbappe – who scored a hat-trick in the 120 minutes of play – devastated on the sidelines.

Raducanu, 20, knows what it is like to make worldwide news, something she did in spectacular fashion when she won the US Open on her debut in 2021, having come through three rounds of qualifying.

It has been a rocky road since then but the chance to be up close and personal with these footballer demigods has left a lasting impression.

Raducanu said: “It was pretty awesome. The pinnacle of sports. Such a cool atmosphere to experience live. I wished there was a tennis court with that many fans in it.

“I just learnt how they deal with it, how they just kept going about their things, how they were taking penalties under pressure. It was pretty amazing to watch.

“To watch them go head-to-head was really cool. What Mbappe was able to do in that final was amazing.

“He was really pushing and carrying the team. I’m really happy for Messi because he just finished it off perfectly.

“But it was just so good to see how they handled the stage and the moment. I actually wanted Argentina to win.”

Raducanu was not the only tennis royalty in attendance on that magical evening just before Christmas.

To her amazement, Novak Djokovic was also there, in the hospitality box, and she managed to share a chat and a photo with the reigning Wimbledon champion.

Raducanu, who was brought in Bromley, Kent, and only finished her A Levels a year-and-a-half ago, said: “It was really cool to meet him.

“It’s funny, because if I saw him at a tournament I would probably be a bit more nervous or shy to say hello, but in that sort of environment it was much easier to talk to him.

“He’s a really cool guy and he took the time to speak with me, mostly about tennis.”

Raducanu, who did not get beyond the second round of the four Slams in 2022, will play German Tamara Korpatsch in the first round of the Australian Open – it will start midnight this evening UK time, which is 11am in Melbourne.

Though she beat the German in their last meeting in Stuttgart, Raducanu comes into this latest fixture with the concerns of having hurt her left ankle sustained 10 days ago.