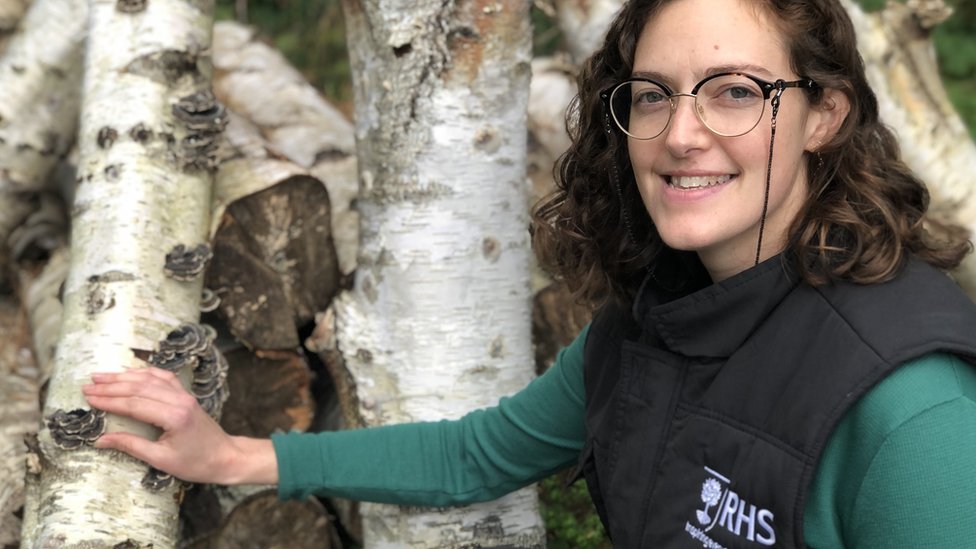 “I find them absolutely stunning,” says Dr Jassy Drakulic, pointing to a fungus emerging from a log.

“There’s a whole series of stripes from browns to blacks to a pale edge.”

Mushrooms aren’t known for their ornamental value, but for this scientist they are a thing of beauty.

The plant pathologist is on a mission to spread the word that fungi need conservation just as much as plants and animals.

“They’re abundant in gardens but until you start looking for them you don’t appreciate how prevalent and how beautiful they are,” she says.

This fungus is named for its resemblance to a turkey’s tail. It belongs to the class of saprophytic fungi, which feed on dead wood, or other decaying matter, and are vital for life on earth.

Turkey tail fungi are a common sight on dead logs, trunks and fallen branches across the UK. But rather than springing up of their own accord, these specimens have been grown from scratch in a first for the Royal Horticultural Society.

Experts grew the fungus in the lab, then transplanted the spores into silver birch logs in the wildlife garden at Wisley Gardens, Surrey. It’s part of a drive to convince the public that fungi play an important role in ecosystems.

“There’s a lot of mycophobia towards fungi in the UK,” says Dr Drakulic. “A lot of people are afraid of poisonous mushrooms, but if you’re not going to go eating the things you find, none of them are going to harm you in anyway”.

Working on the likes of turkey tail fungus is a departure for the scientist, who has spent years researching honey fungus. Honey fungus is a killer of hedgerows, shrubs and trees and there is no cure.

But only a very small proportion of the thousands of species of fungi in the world can cause disease in plants and animals. The vast majority are harmless and often beneficial.

Saprophytic fungi provide food and shelter for wildlife, help plants absorb water and nutrients and break down dead organic matter. Other types of fungi grow on the roots of trees and plants, forming a vast underground network that helps nourish trees.

In the UK there are thought to be around 25,000 species of fungi – five or six times more than plants.

“We don’t have names for most of the fungi that exist, so you can’t protect what you don’t know about,” says Dr Drakulic.

“With fungi, we’re really playing catch up trying to study what we have.”

An estimated two million fungal species – more than 90% of all fungi – have yet to be described by science. Scientists are trying to identify biodiversity hotspots and find out more about this largely unexplored world.