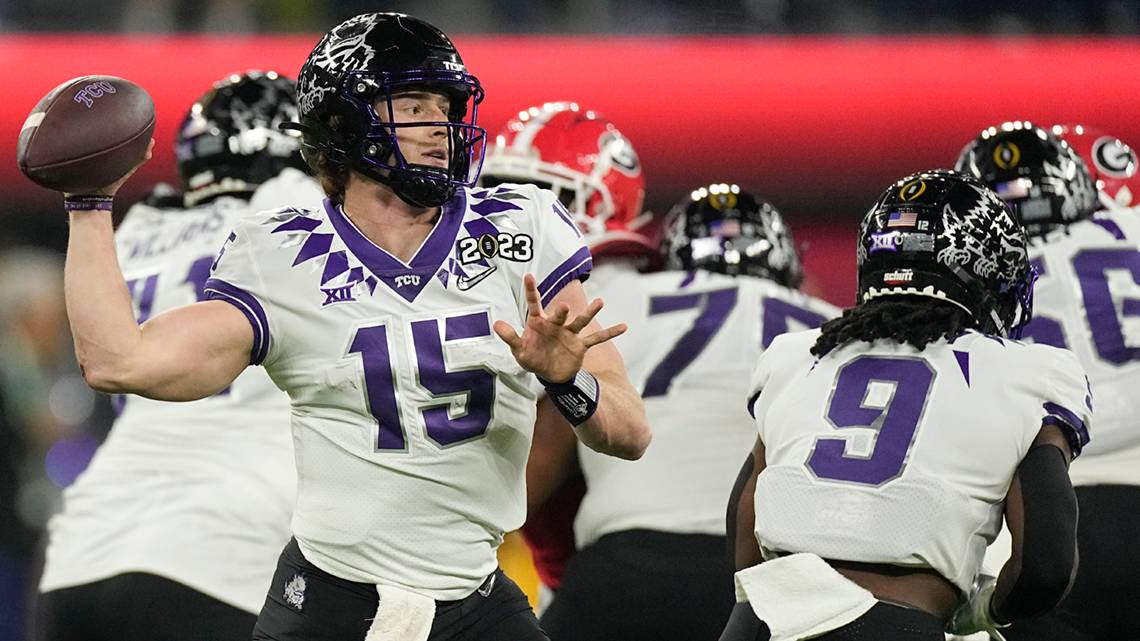 As a lifelong Georgia Bulldogs fan at age 59, I would like to tell TCU fans that we have been there, too. (Jan. 11, 1B, “Despite horrific final score, TCU belonged in title game against Georgia”)

I was a senior in high school when Georgia won the 1980 national championship. We were in position to win it the next two seasons, too, but lost those two bowl games on late fourth-quarter touchdowns by our opponents. Heartbreaking.

We went through many ups and downs since 1980 with several “close but no cigar” moments.

TCU: You are a class act. Your team was fun to watch this season. We were happy for you when you defeated Michigan. We look forward to seeing more TCU magic next season and for years after. What college football fan wouldn’t?

Nothing to be ashamed of

Yay, TCU football! Yes, we lost to Georgia, an incredibly good team. But hold your heads high, Horned Frogs. No apologies necessary. Fort Worth is proud of your efforts. You played your hearts out.

Next year will be here before we know it. We have a great coach, and new players have committed to TCU.

You will always be remembered as a great bunch of young men who gave us your all. Those coming back, we will cheer you on next year. We wish you only good luck and good health.

The College Football Playoff should have been on a broadcast channel. As I saw it on a streaming service, it was the worst football game I’ve ever watched — not only because TCU lost, but also because the commentators never shut up. I wanted to hear how loud the crowd was when TCU hit the field, and I couldn’t make it out over the useless banter.

We took a vote at a watch party I was at and eventually turned off the sound. At least on a regular broadcast network, the commentators are off screen and you can tune them out. Not these guys.

A highway, not a race track

I agree with everything in a Jan. 9 letter to the editor about the dangerous highway traffic in Fort Worth. (5C) I’d like to add a few observations.

The highways are out of control. If you drive 5 mph over the speed limit, you are among the slowest cars on the road.

The aggressive nature of speeders is frightening. Their behavior leads to road rage when you don’t get out of their way. The elevated occurrence of highway shootings is the outcome. Law enforcement with radar guns should be posted at regular intervals.

Except I wasn’t laughing

– Paulo A. Romero, Fort Worth

Enough of football. I’m paying for news, not sports. The Star-Telegram has a whole section for sports.

Some publisher should resurrect Parade magazine, then turn it into a sports magazine and keep that coverage separate.

How Texas can use its extra

Let’s take $1 billion of the state’s budget surplus and use it to build housing for the homeless. What more noble cause for humanity could we pursue as a state? A tax reduction for people who already have roofs over their heads is welcome, but some of the money should be used for those less fortunate.

Nicole Russell’s Jan. 6 column “We’ve coddled kids for too long. They’re not ready for hard times” was written from a place of white privilege. She’s the one who needs to “remove the bubble wrap” and be educated on the “hard times” that impoverished children, who are disproportionately African American, have experienced all their lives.

The Black poverty rate today is still 22%, almost 1 in 4. Russell says that children have “access” to a “quality education,” but many Black students are deprived of it.

And she refers to psychologists who say children aren’t allowed an opportunity to “practice” resilience and courage. Having to be resilient and courageous is a way of life for Black children.