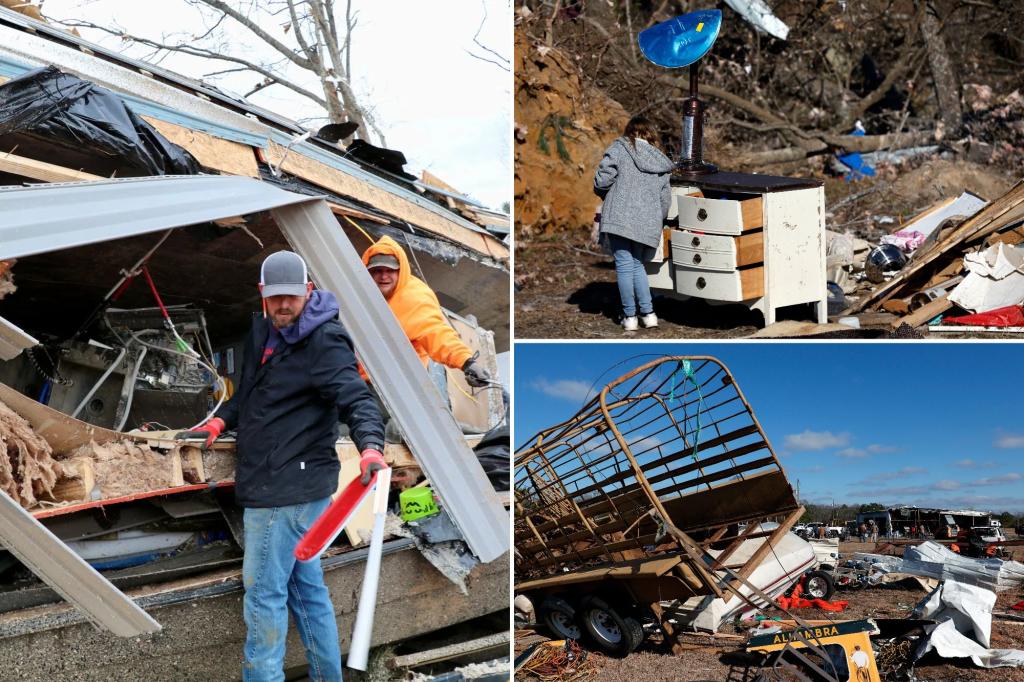 AUTAUGA COUNTY, Ala. – Widespread destruction was reported in parts of the South when a severe weather outbreak spawned several tornadoes on Thursday. And while crews continue the painstaking task of sifting through and clearing storm debris, families are mourning those who were killed.

Storm damage has been reported in nine states, with Alabama appearing to be the hardest hit during the severe weather outbreak.

The deadly storms prompted the National Weather Service to issue a rare Tornado Emergency for parts of Alabama when a large and destructive tornado was spotted outside Montgomery, Alabama.

President Joe Biden on Sunday approved Alabama’s disaster declaration which will now make federal funding available to those who were affected by the severe weather outbreak in Autauga and Dallas counties.

Autauga County in Alabama saw extreme damage when the EF-2 tornado tore through the community.

“Seven people lost their lives here in Autauga County, Alabama, and it’s not lost on anyone here,” FOX Weather correspondent Nicole Valdes said. “How painful these next few days, next few weeks are going to be as they not only mourn the loss of their loved ones but truly they are going to be forced to dig through anything that’s left of their homes to try and find anything salvageable.”

The deadly tornado first moved through Selma, Alabama, and caused catastrophic damage throughout the downtown area.

Amanda McCloud said she’s happy to be alive after the tornado where she works took a direct hit from the tornado.

“The worst day of my life,” McCloud said.

She said the staff was inside Crosspoint Christian Daycare watching after the children when the tornado approached. She said she and her co-worker rushed infants into her boss’s office when the power went out and the roof began to collapse.

She said she found one infant in the rubble under some tiles, and when she took the child back to her co-worker, she said she smelled gas and worked to get herself and the children away from the building. Not long after, she said police and firefighters arrived and helped the nearly 70 children and staff seek refuge in a nearby church.

Valdes has been in Alabama since the severe weather outbreak last week and says she has seen power crews working to restore electricity to those who still have a home.

Of the seven people killed in Alabama during the severe weather, five people from the same family lost their lives.

“This is totally heartbreaking, said Jay Thompson, chairman of the Autauga County Commission. “I met with some of the family members this morning that lost five family members. She was explaining that there’s not a whole lot of family left. So it wiped whole families out. You know, five isn’t a huge number. But if five is all you have, that’s 100 percent. And that’s a lot.”

The tornado struck in a rural area of Alabama, and Valdes said there aren’t a lot of options when it comes to storm shelters.

“So, officials told me that during these tornado warnings, these men and women who do live here sometimes only have their mobile homes to shelter in and hope for the best,” she said. “Hope that these tornadoes do not have a direct hit on their home.”

Valdes said there are no county-run shelters in Autauga County, but they do work with local nonprofits and churches to try and give people options of where to go before a storm hits.