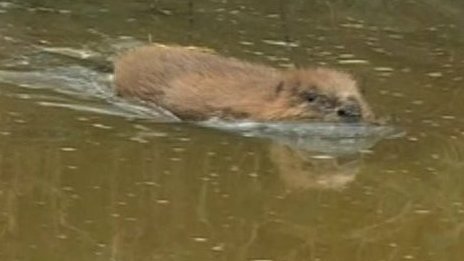 A pair of beavers have been released as part of a rewilding on a former shooting estate.

The two – named Chompy and Hazel – were introduced on the 925-acre Ewhurst estate near Basingstoke, Hampshire.

The semi-aquatic mammals, which were hunted to extinction in the 16th Century, create wetlands and wildlife habitat.

Estate owner Mandy Lieu said she was “thrilled” to bring back beavers to Hampshire after 400 years.

Beavers were once widespread in Britain, but were hunted for their fur, glands and meat.

They are now found living in the wild on a number of rivers in Scotland and England through official trials and illegal releases or escapes, and have also been introduced into enclosures in a number of English counties.

The Beaver Trust described them as a “keystone species” with the ability to improve entire ecosystems by kickstarting the natural processes needed to restore habitats and reverse species loss in an area.

There is a growing body of evidence from reintroduction sites that beaver dams slow the passage of water through landscapes, cutting flood risk downstream and also conserving water in times of drought.

The two beavers, who did not previously know each other, were released into a waterway on the estate. It is hoped that, in time, they will breed.

They have been named Chompy and Hazel following a competition run for local school children.

“Both beavers left the crates and swam off quite calmly.

“As ecosystem engineers, beavers provide multiple benefits in terms of habitat creation and wetland creation which ultimately provides homes and habitats for other species insects, birds and fish.

“But also for climate resilience, these dams will help hold water back and alleviate flooding further downstream,” he said.

Ms Lieu, a Malaysian-born model, entrepreneur and environmentalist, sees the beavers as a key part of transforming Ewhurst, the former seat of the Duke of Wellington.

The rewilding project entails turning its parkland, farmland and woodlands into an “edible landscape” that restores nature at the same time as producing food.