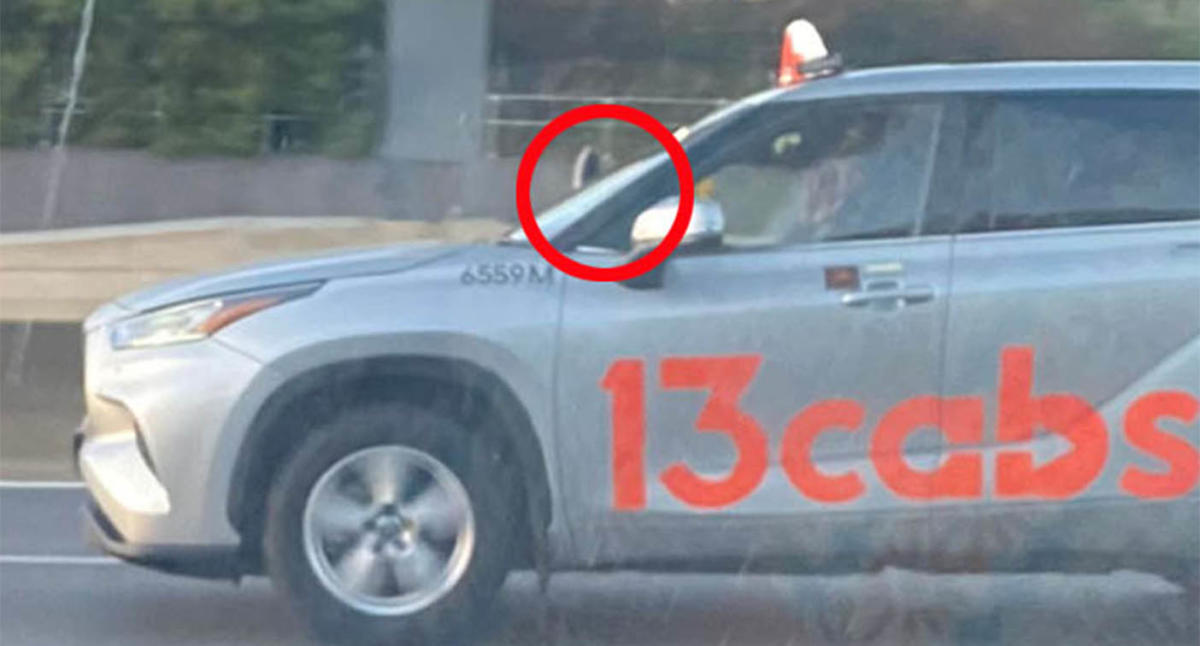 A Victorian taxi driver has been captured driving along a busy Melbourne highway with what looks to be a leg hanging out of the driver’s window.

The bizarre scenes were captured by a Melbourne man who told Yahoo News Australia he was driving past at the time and spotted the taxi at 8.45pm on Saturday on the CityLink between Flemington and Moreland Rd.

In photos shared with Yahoo News, the driver of the 13cabs vehicle is seen travelling with the window down while someone’s leg hangs out of the window and rests on the side mirror. Other photos taken from the other side of the vehicle show a single sneaker-wearing foot dangling from the taxi as it continues on its journey.

The unusual sight left social media users baffled after an image was shared in a popular Melbourne drivers’ Facebook group. Some were quick to question who the leg belonged to with most convinced it was the driver’s limb. The likely reason for this is that no passengers can be seen in the car.

“He’s all good, he’s got cruise control set,” another joked of the driver’s seemingly relaxed state.

While it can’t be confirmed, a reasonable explanation is that there’s a passenger in the back seat hidden behind the tinted windows. For their leg to reach the front seat window, they could be slouching and stretched out.

Yahoo News contacted 13cabs for confirmation and an explanation, but without a proper investigation, they were unable to confirm. A spokesperson told Yahoo it is “inappropriate behaviour” and said they’re “looking into the image”.

In Victoria, it’s an offence to drive or travel with any part of the body protruding from the car, Victoria Police confirmed. This applies to both the passenger and the driver of the vehicle. Offenders could face a fine of $185.

Hitting back at those who suggested the leg belonged to the driver, one person said “what taxi drivers wear tracksuit pants and runners”.

“Why are we all attacking the driver because he had a douche customer that decided to put his foot out the window?” another said.

“You can clearly see from the picture it’s the passenger,” a third concluded.