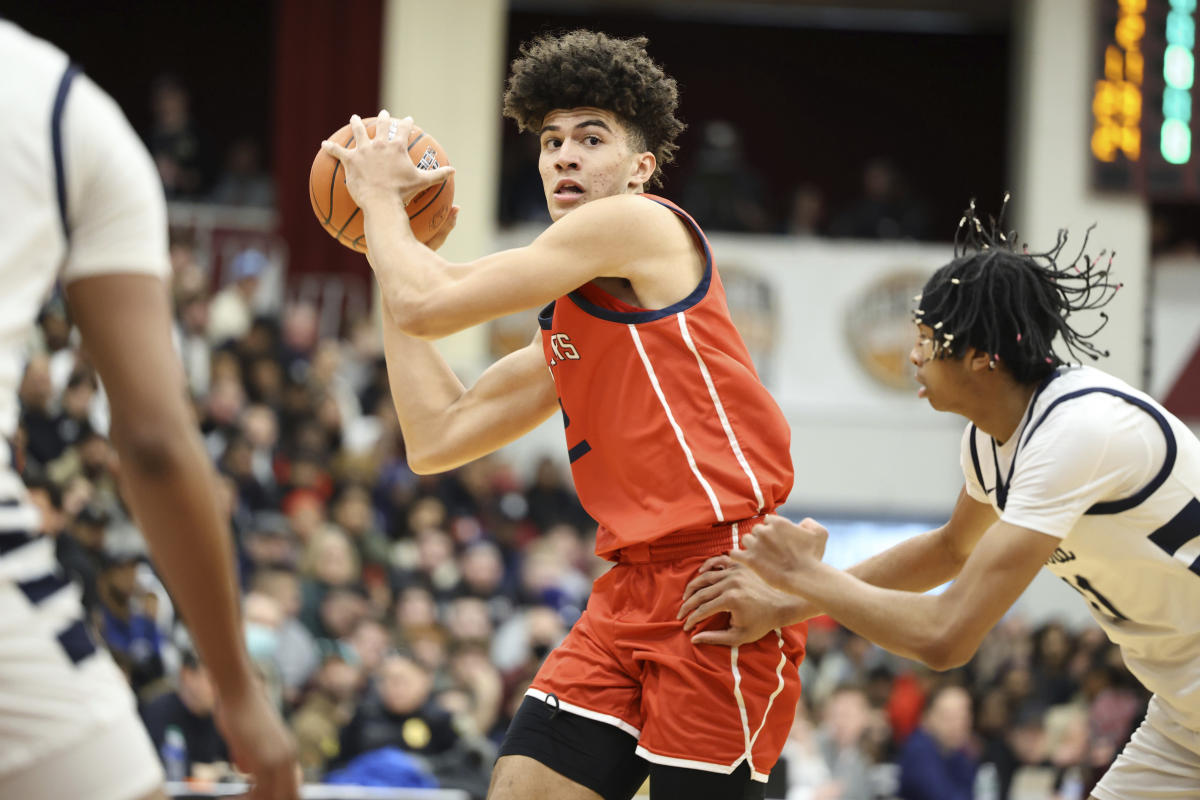 SPRINGFIELD, Massachusetts — Blake Arena was past capacity three hours prior to tipoff for one of the biggest high school games of the year featuring Bronny James and arguably the best player in high school basketball, sophomore Cameron Boozer and his twin brother, Cayden Boozer. More than 2,000 fans, college coaches and NBA scouts packed the small arena at Springfield College to watch Sierra Canyon (California) take on Christopher Columbus (Florida) during the Hoophall Classic. The game came down to the wire in a thrilling finish with the Christopher Columbus Explorers edging out the Sierra Canyon Trailblazers, 47-46.

Cameron and Cayden’s father, former NBA player Carlos Boozer, was in attendance sitting baseline and taking in the action, but with the Los Angeles Lakers playing the Houston Rockets at home Monday night, LeBron James was unable to make the trip to see his sons, Bronny and Bryce, play.

It was a back-and-forth battle from the start with 10 lead changes and a 1-point game heading into the fourth quarter. Sierra Canyon extended its lead to eight with just over three minutes to go in the game. Cameron Boozer was on a mission out of the timeout, scoring 7 consecutive points in the final two minutes to bring the game within 1 point. The explorers were down with seven seconds left after Sierra Canyon’s Isaiah Elohim missed the front end of a one-and-one. Cameron Boozer drove the lane and the ball was knocked from his hands with his teammate Malik Abdullahi scooping up the ball for an easy layup as time expired.

“I told [Cameron] just to dig deep and we had to fight until the end,” Explorers head coach Andrew Moran told Yahoo Sports after the game. “I know he didn’t score the winning bucket, but he made the play. Both Cameron and his brother stay settled, they don’t get rattled much and Cameron, at such a young age, continues to be a leader and bring our guys together throughout the game.”

After two early fouls in the first half, Cameron Boozer came alive, scoring 11 of his 18 points in the second half. He also added 13 rebounds, four assists and two steals in the win. Cayden Boozer was also a huge factor, netting 11 points, seven rebounds and three assists. Sierra Canyon was led by Elohim, a junior guard, who finished with 16 points.

Bronny James continues to have a strong senior season and had one of his best games from start to finish with 13 points (three 3-pointers), eight rebounds, five steals, three assists and only one turnover in 27 minutes on the court.

“I really like Bronny’s game,” Moran told Yahoo Sports. “I got to see him play when he was young in Miami [when LeBron James was playing for the Heat] and watch him grow as a player, and I hear he has great work ethic. His shot is much improved, and he has deep range. He’s a team player and plays basketball the right way.”

The Boozer twins are only sophomores but have already received a handful of early offers, including Duke, Miami, Florida State, Arkansas and Missouri. Duke is the early favorite for the pair because their dad played there and they have close ties to the university.

“Duke is just a great school, and they have a history of winning,” Cameron Boozer told Yahoo Sports in October. “We were going to take a visit this fall, but had a conflict with our schedule, so we’ll see what happens after the season.”

Bronny James’ recruitment has been kept under wraps with the 6-foot-2 taking only one known official visit to Ohio State in early September. Michigan, USC, Oregon and Memphis are other schools who are thought to be involved. A decision from Bronny James isn’t expected until after his high school season or the late signing period in April.

The Explorers will head back home to Miami and will take on Sacred Heart-Griffin (Illinois) on Jan. 21 at the Wally Keller Classic. Sierra Canyon (17-4 overall, 3-0 league) returns to conference action Wednesday night back in Los Angeles and will face St. Francis.