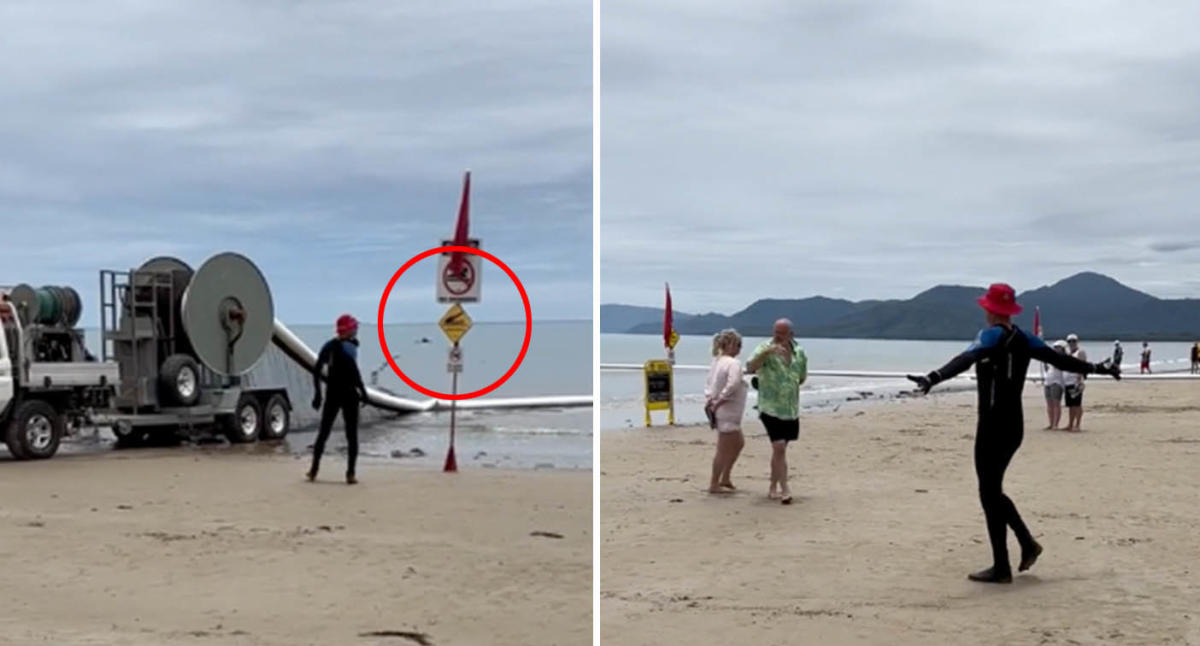 People were swimming for “well over an hour” when a crocodile was spotted from within the nets of a popular North Queensland beach.

A local who was at Four Mile Beach on the day, filmed a lifeguard warning beachgoers to stay away, and also took a photo of the animal.

“Port Douglas you beauty,” Sara Meaney said in her caption.

In the comments, she said that the lifeguards “spotted it whilst dragging the nets in the morning” on New Year’s Eve.

“People were swimming for well over an hour or more before a lifesaver spotted at 8am,” Ms Meaney said. “Croc didn’t do anything. Lifesaver said it was harmless due to its size.”

Yahoo News Australia spoke to the Supervising Lifesaver at the North Queensland surf life saving branch, Jay March, who was there on the day.

He said the “little fella found his way inside the net,” and was “having trouble getting out”.

“Turned out it was only a very small croc, only three quarters of a metre long,” Mr March said.

The supervising lifeguard said incidents like this “happen occasionally over the years,” mainly due to bad weather.

“The smaller ones seem to get in there when conditions are a bit rough, and they get tired and are looking for a place to rest up. We’ve had a few smaller ones over the years but the big ones don’t. They seem to be a bit more weary.”

“They do hang around outside the nets but very rarely do they go inside.”

Mr March explained how the lifesavers at Four Mile Beach handled the situation.

“For any confirmed croc sighting no matter how big they are, we follow our protocols,” he said. “We close the beach for a minimum of four hours and report the sighting to the department of fisheries, through their app.”

The baby croc was then lifted up with the net and let back out.

Stinger nets do not keep out crocodiles, beachgoers should stay vigilant

According to Surf Live Saving Queensland, stinger nets aim to protect swimmers from box jellyfish and other small marine life, not crocodiles.

The Queensland Department of Environment and Science recommend that beachgoers watch out for crocodiles after high tides and heavy rains.

“Crocodiles can move further upstream during very high tides and periods of flooding and may move into new areas where they have not been seen before,” they say on their website.

People should not swim or step in murky water, as crocodiles — who can stay underwater for more than an hour — can go unnoticed.

Swimmers should also comply with croc warning signs and go where lifeguards are on duty to watch over.

If seen, Mr March encouraged swimmers to report croc sightings to the Queensland Department of Wildlife and Science through the QWildlife app.

Both videos by the Port Douglass resident were viewed a total of 425,000 times, with many shocked at the incident.

“Kids and I got there just as they called everybody out,” one local mother said on the Tiktok.

“No swimming at Port for a bit,” another said.

“Might be tiny but it’s still got a deadly jaw with teeth,” a third person said.

“I went to Port Douglas a month ago,” someone else commented. “We literally avoided the beach cause of the crocs.”

The experience however has not deterred Ms Meaney from wanting to swim at her “favourite beach in Australia.”

“The water is heavenly,” she said.