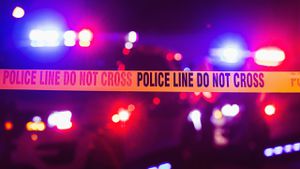 An investigation is underway after an employee witnessed an armed woman in a car outside of a motel in Daytona Beach on Sunday morning.

When police arrived, they found Shannon Kay sitting in the driver’s seat of the vehicle, a Subaru Outback, and Derek Pearson outside of the Outback filling the car with gasoline.

Pearson told police that the car had run out of gas.

Police said that there was a toddler and another man inside the vehicle when they arrived.

According to a police report, the other man exited the Outback and waited to talk to officers.

Pearson hid his ID card in the soiled diaper in order to avoid police finding out his real name, according to the police report. Pearson had warrants from Maine with extradition from Florida.

Police said the other man in the car, nicknamed Koala, told them that he was kidnapped from his RV by Pearson and Kay about 25 minutes before police arrived.

Koala told officers that he was partying with Pearson and Kay Saturday night with another girl named Christina.

On Sunday morning, Kay and Pearson returned to the RV, armed with a firearm and taser, and kidnapped Koala accusing him of stealing $80 and Pearson’s cell phone.

According to the police report, Koala told the couple that Christina took the items and said he would help get them back.

It should be noted that police said Pearson’s father-in-law tried to report the car stolen on Saturday but the issue was determined to be civil in nature and the Outback was never reported stolen.

According to the police report, Koala planned to grab the steering wheel and crash the car but changed his mind after seeing that the toddler was unsecured in the back seat.

Police said that Koala wished to pursue criminal charges against Kay and Pearson, and he also had an open warrant out of Flagler County and was taken into custody.

Pearson and Kay were also taken into custody and transported to the Volusia County Branch Jail.

Pearson is being charged with kidnapping, armed burglary, aggravated child abuse, aggravated assault with a deadly weapon and giving false ID to police.

The toddler was taken into custody by the Department of Children and Families.