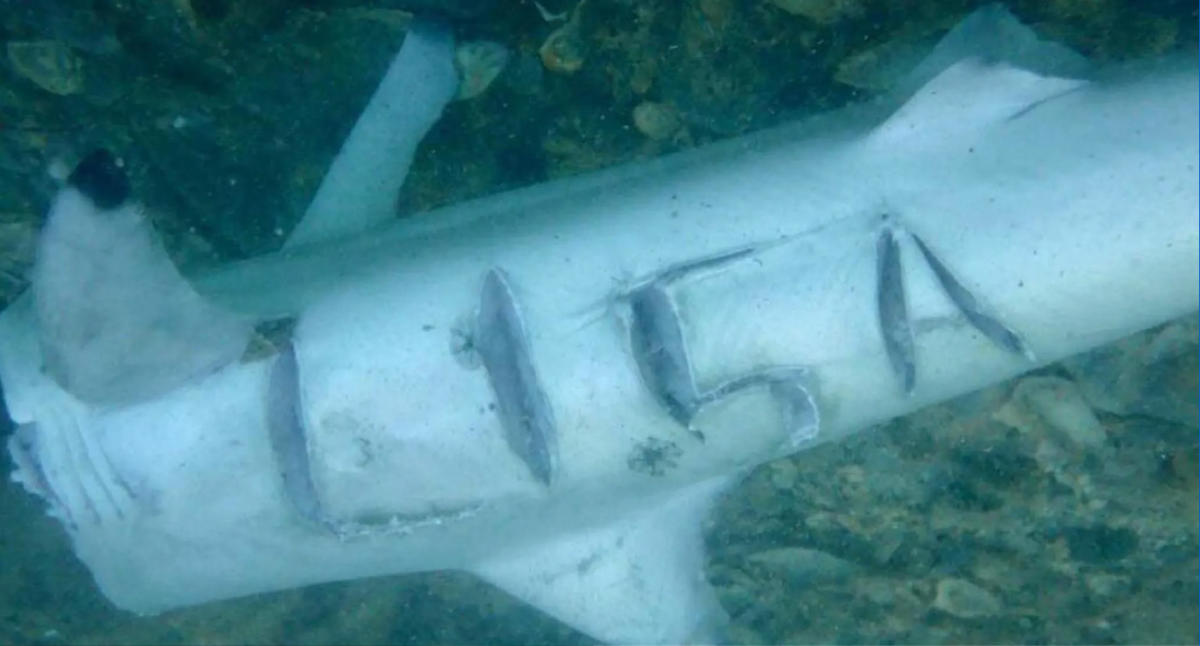 WARNING – DISTRESSING CONTENTS: A dead shark with the name ‘Lisa’ carved into its skin has been found at a jetty in Fremantle, Western Australia.

The carcass is believed to be a threat to Lisa Hills, an advocate against shark fishing in the area, who reminded fellow swimmers in a Facebook community page last week that it is illegal to shark fish in the area after spotting many dead marine animals floating in local waters.

“I have been receiving lots of photos from my dive buddies of the remains of sharks and rays that clearly weren’t natural deaths,” Ms Hills told Yahoo News Australia.

Ms Hills, a local scuba driver, said she was shocked at the “unnecessary cruelty” inflicted on the shark when a friend of a friend spotted the carcass and took a photo to send to her.

In June last year, the port city of Fremantle in Western Australia enforced a local law that banned the fishing of sharks using a specified type of fishing rod, criminalising the majority of recreational fishing activity in the area.

In the press release detailing the ban, City of Fremantle officials explained that this new enforcement was “in response to growing community concern about shark fishing at popular beaches”.

The announcement continued by detailing that perpetrators would be fined $500 for not complying.

Although the ban was overwhelmingly favoured by locals, public sentiment towards the sharks that swim in local waters is mixed.

After a fatal shark attack in the area in November 2021, a shocking video of a shark being dragged onto the beach highlighted the fury felt by locals after the tragic incident and serves as another example of Australia’s never-ending complex relationship to the predators.

Why do people fish for sharks?

Other than unintentionally catching sharks when fishing, there are only two reasons why shark fishing occurs, according to Ms Hills.

One is for an ego boost, and the second is for a photo opportunity to post on social media platforms and claim gloating rights for catching the fearsome creatures.

In the Fremantle area, there is a high level of shark fishing activity despite the bans being in place.

Ms Hills stands strong in her advocacy despite the threat, saying her determination is fuelled by this incident.

“I’m so passionate about marine life and my passion drives me,” she said.