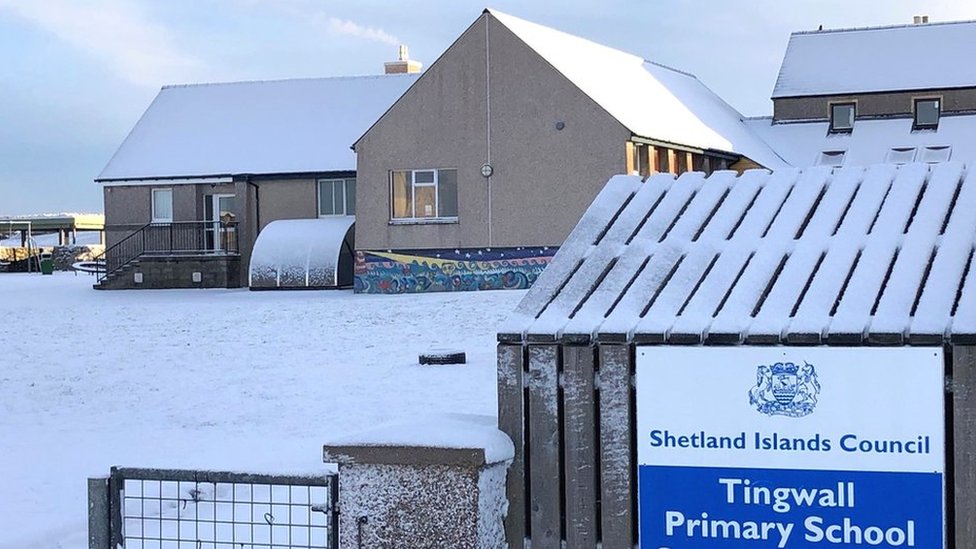 Snow has forced the closure of all Shetland’s schools and nurseries.

The council took the decision after overnight snow fell across most of the islands.

Mainland Scotland was also affected, with more than 30 Highland schools either closed or partially shut due to the bad weather.

A yellow warning for snow and ice is in place for Scotland until Wednesday but the major disruption experienced in December is not expected.

BBC forecaster Billy Payne said snow had fallen in parts of Scotland, even on low ground – with 18cm (7in) recorded at Loch Glascarnoch in the Highlands.

Further frost and ice risks are expected over the next few nights and daytime temperatures should stay low, he said.

There have also been a number of weather-related problems in the south of the country.

In Dumfries and Galloway, Gatehouse Primary has been shut due to a heating failure and there have been issues in the neighbouring Scottish Borders.

Motorists were asked to drive safely as snowy conditions affected the A7 at various locations and was also causing problems on the A68 at Soutra.

An overturned vehicle was reported at Carter Bar and there were also delays around the B6357 at Hundalee and the B6358 Jedburgh because of an accident.

How have you been affected by the adverse weather conditions? Tell us by emailing: haveyoursay@bbc.co.uk.

Please include a contact number if you are willing to speak to a BBC journalist. You can also get in touch in the following ways:

If you are reading this page and can’t see the form you will need to visit the mobile version of the BBC website to submit your question or comment or you can email us at HaveYourSay@bbc.co.uk. Please include your name, age and location with any submission.