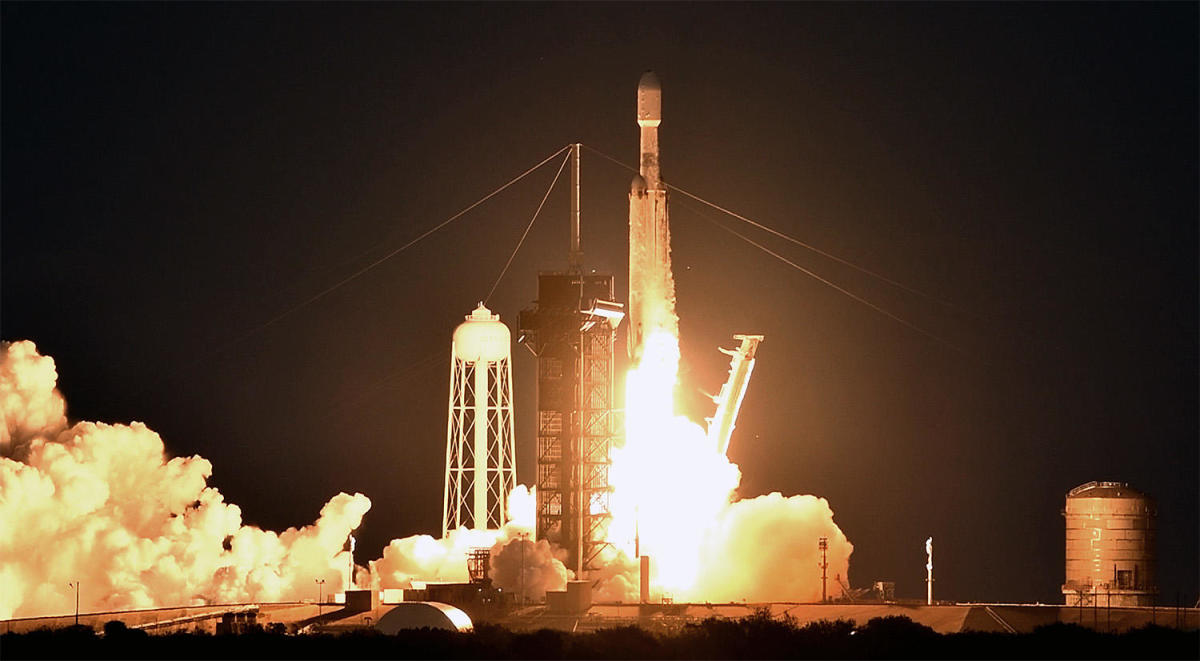 Generating more than 5 million pounds of thrust from 27 Merlin engines powering the rocket’s central core and twin strap-on boosters, the Falcon Heavy blasted off from pad 39A at the Kennedy Space Center at 5:56 p.m. EST, arcing away to the east over the Atlantic Ocean.

The huge rocket, second only to NASA’s much more expensive Space Launch System moon rocket in liftoff power, put on a spectacular show for spaceport workers, area residents and tourists, climbing into the glare of the setting sun atop a brilliant jet of flaming exhaust.

It was just the fifth flight of a Falcon Heavy, which debuted in 2018 by launching a Tesla roadster into space with a pressure-suited mannequin at the wheel.

While the Heavy is the most powerful operational rocket in SpaceX’s inventory, it will be dwarfed by the company’s fully reusable Super Heavy/Starship, which is being readied for an initial test flight in the next few months from Boca Chica, Texas.

If it works as planned, the gargantuan Super Heavy will generate 16 million pounds of thrust, twice that of NASA’s SLS and three times as much as the Falcon Heavy.

But the triple-core Falcon Heavy, making its second national security launch, chalked up a picture-perfect climb to space Sunday.

The two side boosters fired for two-and-a-half minutes before falling away and flying themselves back to synchronized side-by-side landings at the Cape Canaveral Space Force Station. Heralded as usual by shotgun-like sonic booms, the boosters first flew on a Space Force Falcon Heavy last November and both will be used again in an upcoming mission.

The central core booster fired for an additional minute and a half before it, too, fell away, leaving the rest of the ascent to the Falcon Heavy’s second stage. Unlike the side boosters, the core stage used all of its propellant as planned to complete the climb out of the lower atmosphere and recovery was not possible.

The second stage used its single vacuum-optimized Merlin engine to reach an initial parking orbit before heading on to the targeted geosynchronous orbit 22,300 miles above the equator. But as usual with many military launches, details were not released.

The Continuous Broadcast Augmenting SATCOM (CBAS)-2 is designed to operate in geosynchronous orbit “to provide communications relay capabilities in support of our senior leaders and combatant commanders,” the release said. “The mission of CBAS-2 is to augment existing military satellite communication capabilities and continuously broadcast military data through space-based satellite relay links.”

The second satellite, the Long Duration Propulsive ESPA (LDPE)-3A, is a payload carrier equipped with its own propulsion and navigation systems “to rapidly place multiple, diverse payloads into orbit and provide critical data to inform and influence future U.S. Space Force programs.”

The LDPE is “a freight train to space for experiments and prototypes in geosynchronous Earth orbit that can be manifested on any National Security Space Launch mission with available mass margin,” said Col. Joseph Roth, Space Systems Command director of innovation and prototyping.

“The LDPE’s modular … design and standard interfaces provides the perfect platform to host a wide variety of payloads across many mission areas.”

An update on our Counting the Vote story | 60 Minutes