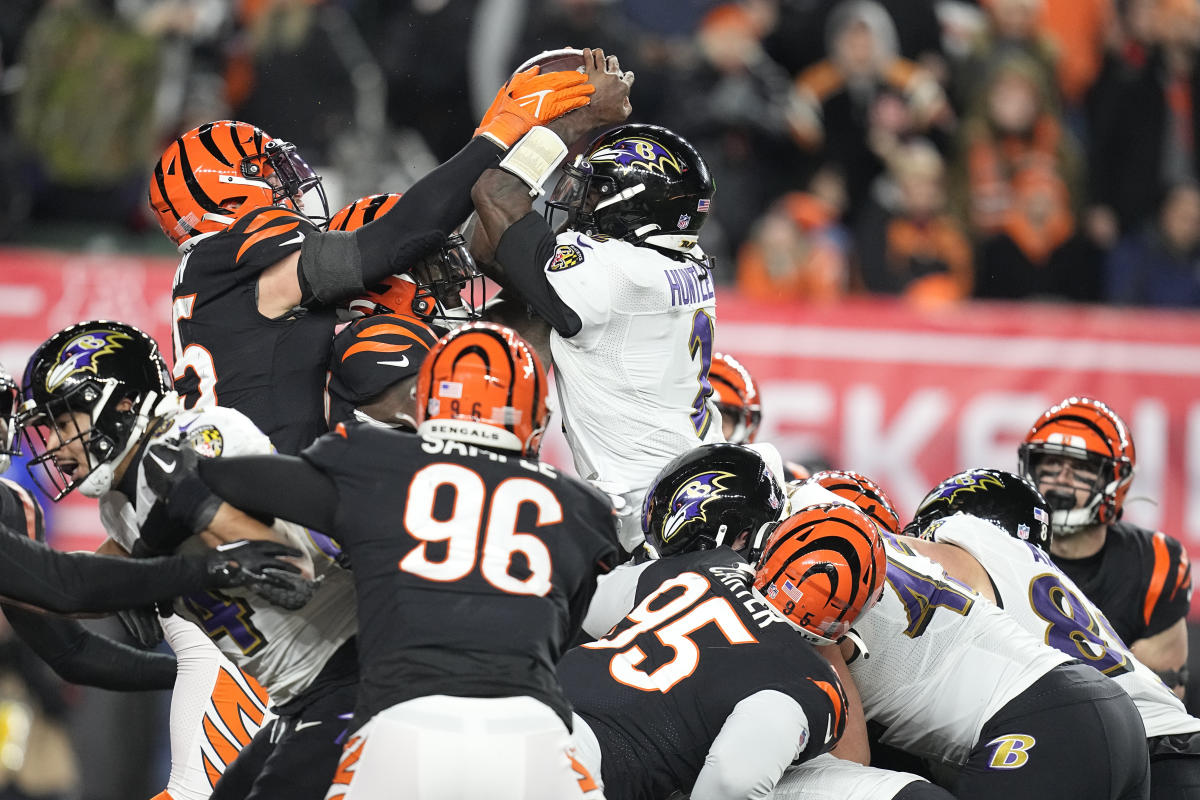 Logan Wilson must have known the old “jump and stretch the ball over the goal line” play was coming.

We’ve seen it countless times on quarterback sneaks, but rarely has it been defensed as well as Wilson did it on Sunday night. Wilson, the Cincinnati Bengals linebacker, reached up when Baltimore Ravens quarterback Tyler Huntley was about to cross the ball over the goal line in the fourth quarter of a tie game. Wilson knocked the ball out, then defensive end Sam Hubbard took the fumble and raced 98 yards for a touchdown. You won’t see many plays turn a playoff game that abruptly.

The Bengals made that great defensive play and then got a stop in the final minute after the Ravens drove inside the 20-yard line to hold on to the 24-17 win. A final pass by Huntley to the end zone barely fell incomplete as time expired and the Bengals survived. The Bengals will play a divisional round game at the Buffalo Bills next weekend.

Baltimore put up a great fight without Lamar Jackson and had a great shot at the upset until Wilson’s fantastic play at the goal line. It was the longest fumble return for a touchdown in playoff history. It was also the longest defensive touchdown since Taron Johnson of the Buffalo Bills had a 101-yard interception return against the Ravens in the 2020 playoffs. It was one of the biggest plays in Bengals history, and one of the most stunning defensive plays in NFL playoff history.

The Ravens will wonder what would have happened if Huntley just stayed on the ground instead of trying to go over the top.

Like plenty of other playoff games on wild-card weekend, the start of Sunday night’s game was misleading. The Bengals got a field goal to start it. Then Ja’Marr Chase scored a 7-yard touchdown and even though the Bengals missed the extra point, they led 9-0.

The Ravens were underdogs because their quarterback situation has been a mess without Lamar Jackson. They trailed early. The Bengals have been playing very well. It seemed like the game might get out of hand early.

Then the Ravens got tough. They went on a 17-play, 75-yard drive that ended with a touchdown. Then rookie safety Kyle Hamilton forced a fumble that the Ravens recovered and they cashed that in with a field goal at the end of the first half.

The Ravens somehow led 10-9 at halftime. The Bengals lost a third offensive lineman to injury, with left tackle Jonah Williams suffering a leg injury. The Ravens had turned the game into the slugfest that gave them a chance to win.

It wasn’t a pretty half, but an effective one for the Ravens.

The Ravens continued to battle. The offense, which has been awful without Jackson, was doing enough to put a scare into Cincinnati. Huntley hit Demarcus Robinson for a 41-yard touchdown to tie the game in the third quarter. In the fourth quarter the Ravens were at the 1-yard line with a chance to take a lead.

The Ravens lined up in a formation that has become familiar, thanks mostly to the Philadelphia Eagles and Jalen Hurts. Baltimore had multiple players behind Huntley, ready to push him in on a quarterback sneak. Huntley, perhaps seeing an opening over the pile, jumped up and stretched out the ball. That’s when the Ravens’ upset bid ended. Wilson made a great play and Hubbard beat everyone down the field to the end zone.

The Ravens defense kept the team in the game after that turnover. A Ravens drive got to about midfield but a third-down sack shut it down. Baltimore forced another punt and the Ravens got a drive inside Bengals territory. A quarterback run on fourth-and-1 kept the drive going. A pass to J.K. Dobbins got the Ravens inside the 20-yard line. A holding call on a run play with 22 seconds left, after the Ravens had let the clock run, was a huge blow. On fourth-and-20, Huntley threw a desperation pass to the end zone and it was almost caught as time expired. Ravens receiver James Proche had a shot at it and the ball grazed his fingers before it hit the ground, but it fell incomplete.

The Bengals offense is what gets all the attention in Cincinnati, and rightfully so. But on a night that the Ravens did a pretty good job slowing down Joe Burrow and his teammates, the Bengals defense kept the team’s postseason dreams alive.