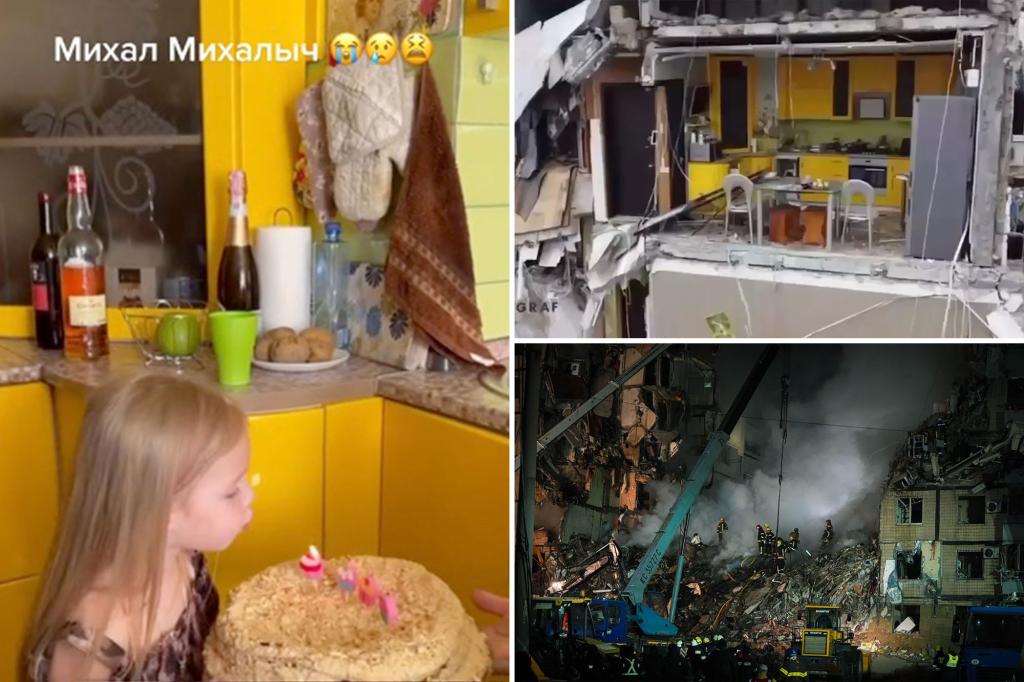 Gut-wrenching footage has emerged showing the family of a Ukrainian boxing coach celebrating the birthday of one of his young daughters, shortly before a Russian missile strike destroyed their apartment building in Dnipro, killing at least 40 people.

Mykhailo Korenovsky, the head coach of the Dnipropetrovsk region’s boxing team, was confirmed to be among the casualties of Saturday’s deadly air strike targeting a high-rise apartment complex home to about 1,700 people, Ukraine’s Boxing Federation said.

An undated video recording showing Korenovsky and his family recently celebrating the birthday of one of his daughters in their kitchen, painted a bright yellow hue, has been shared on social media sites, juxtaposed with a still photo of the Korenovskys’ ravaged apartment after the missile strike.

In the recording, a beaming young girl in a festive leopard-print dress is presented with a large cake and blows out four candles as her loved ones chant: “Happy Birthday!”

Her dad is seen in the kitchen smiling while picking up in his arms another youngster, while the birthday girl is getting hugs and kisses from her relatives.

“Family celebrations took place in this kitchen, but the rocket of the invaders destroyed the life of the Korenovsky family forever,” read a post accompanying the heartbreaking video that was shared on the Ukrainian Armed Forces’ Telegram account. “A loving husband and dad remained only on video.”

In still photos documenting the impact of the strike, the family’s yellow kitchen is exposed to the elements after the missile caused the exterior wall to collapse.

Korenovsky’s widow, Olha Korenovksya, a personal trainer, wrote on her Instagram page: “This hole was once my apartment where I lived with my family for 9 years. Me and my kids were out at the moment of the explosion, and my husband was at home having his lunch. He was going to join us moments before.”

The 38-year-old mom-of-two and her girls were taking a walk and were unharmed by the blast which killed Korenovsky. His body was recovered from the rubble Sunday.

Regional officials said 39 people have been rescued so far and 30 more were still missing. At least 75 people were wounded, including 14 children.

The death toll, which included at least two children, made it the deadliest single attack on a civilian target since last spring.

Ukrainian officials acknowledged little hope of finding anyone else alive amid the debris, but President Volodymyr Zelensky said the rescue operation would continue “as long as there is even the slightest chance to save lives.”

“Dozens of people were rescued from the rubble, including six children. We are fighting for every person!” Zelensky said in an overnight address.

The Ukrainian leader also addressed Russian citizens in their own language, saying: “I wish to say something to all the people in and from Russia who even now could not utter a few words of condemnation of this terror, even though they see and know everything.”

He continued: “Your cowardly silence, your attempt to wait out what is happening, will only end with those same terrorists coming after you. Evil is very sensitive to cowardice. Evil always remembers those who fear it and try to bargain with it, and when it comes for you, there will be no one to protect you,”

Kyiv said the apartment building was hit by a Russian ship-to-ship missile, of a type that Ukraine does not have the capability to shoot down.