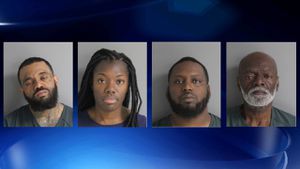 Four people were arrested, including a middle school teacher, after a 17-year-old boy was found beaten and naked on the side of the road in Beech Island, South Carolina.

According to the Aiken County Sheriff’s Office, the boy was found early Jan. 3 and was “completely unclothed and the victim appeared to have been brutally beaten.”

A deputy tried to speak with the victim, but, “he was really hard to understand due to his face being so swollen.”

The deputy was able to determine that the boy said he had been lying on the side of the road all night.

As the investigation progressed, investigators identified Patrick Stevens, 36, and Derrick Nixon, 32, as suspects in the assault.

Rickey Drayton, 62, and Raquel Stevens, 35, were also taken into custody.

Raquel Stevens, a current teacher in Aiken County, previously made headlines in 2018 when she forgot her toddler was in the car with her and left the child there for nearly 10 hours while she worked teaching math at North Augusta Middle School.

According to WRDW, Raquel is still a teacher in the district and has been placed on administrative leave.

Nixon was charged with pointing and presenting a firearm.

Rickey Drayton was charged with two counts of possession of cocaine first offense, operating a stash house, and possession with intent to distribute marijuana first offense.

Raquel Stevens was charged with possession of anabolic steroids 100 doses or more, possession of fentanyl, violation of drug distribution law, possession with the intent to distribute a controlled substance near a school, and unlawful neglect of a child.