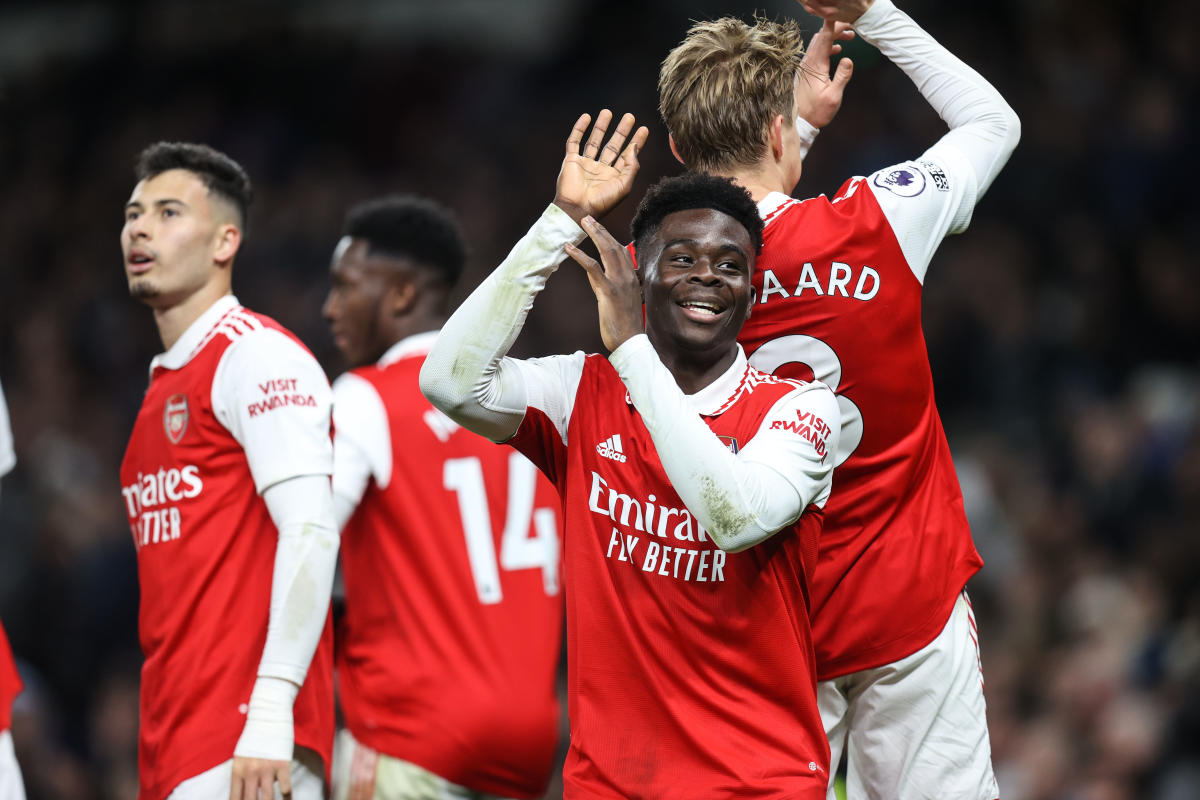 There’s a new title favorite in the English Premier League.

Here’s where things stand at BetMGM at roughly the halfway point of the 38-game EPL season.

Favorites to win the title

The Gunners are no fluke and their lead is eight points with 20 games to go. It’s a significant margin, but also not insurmountable. Arsenal may not have the squad depth of a team like Manchester City, but it also doesn’t have to worry about the Champions League like City does. Missing out on the UCL may end up being a huge boost for Arsenal’s title chances. The Gunners haven’t won an EPL title since 2003.

This City team is in a funk at the moment. The loss to United came after a loss to Southampton in the Carabao Cup. Erling Harland has 21 goals in 17 league games and has been everything Man City could hope for in his first season. But does City need a couple other players to step up? Phil Foden is the No. 2 scorer with seven league goals and no one else has more than three. Tottenham’s form isn’t great at the moment either, but Thursday’s game could be a test.

United hasn’t lost a competitive match since Nov. 6 and is now seven points ahead of fifth place. A title challenge is probably too much to ask for Erik ten Hag’s men, but as long as Marcus Rashford is in this stellar form, United look unbeatable. Sunday’s game against Arsenal could be awesome. And if United wins, its title odds will get a lot shorter.

Newcastle’s goal difference is a strong +22 and third-best in the Premier League and the team also has the benefit of no midweek fixture this week. The schedule is also extremely easy for the foreseeable future with two Carabao Cup semifinal legs against Southampton and three league games against teams in the bottom half of the table. Games against Liverpool, Brighton & Hove Albion and Manchester City over three weeks starting Feb. 18 will tell us a lot about Eddie Howe’s side.

Odds to get relegated

The Cherries are in the unfortunate spot of relegation favorite thanks to a brutal run of league form. Bournemouth hasn’t gotten a point in the league since a 2-2 tie with Fulham on Oct. 15. That’s a run of 10 games.

Everton has never been relegated from the Premier League and its fans are furious with the way things are going. It seems a matter of time before Frank Lampard moves on as manager and whoever would succeed him will have a heck of a relegation fight on his hands. Points against West Ham on Saturday are crucial. The next two games after that are against Arsenal and Liverpool.

The Saints pulled level on points with Everton after a 2-1 win over the Toffees on Saturday. Southampton is in the midst of a youth movement at the club and the results are slowly getting better. A home win against Aston Villa on Saturday could lift Southampton out of the relegation zone ahead of a trip to Brentford on Feb. 4.

Forest has seven points from its last three league games and has vaulted all the way up to 13th in the table as a result. That leap up the standings is emblematic of how close things are at the bottom. The bottom eight teams in the league are separated by five points. Goal difference is going to be massive over the final months of the season.

Wolves has seven points over its last four games as Julen Lopetegui’s arrival as manager has provided a spark. This feels like a team that’s better than its league position and we wouldn’t take this bet at these relatively low odds. We’d be surprised if Wolves get relegated.

Leicester is a much better value to go down at these odds. This is a listless side without James Maddison on the field and it’s fair to wonder if his return from injury will be enough to turn the season around. Is Brendan Rodgers’ time as manager nearing an end?

Leeds’ last win came over Bournemouth, though it’s gotten two ties since then. That’s enough to keep Leeds out of a tie for last place on points. While Leeds is struggling to win games this season, it’s also not getting blown out. That’s massive in this relegation battle. Leeds and Leicester City are both -7 on goal differential. No other team with 20 or fewer points is at better than -10.

The Hammers are tied for last despite being -10 on goal difference. But things are so clustered that a win could jump West Ham all the way up to 14th. Goal difference could end up being key for West Ham too, and this is another team that seems way better than where it is in the table. That’s why West Ham’s odds are +400.

Palace is a long shot to get relegated but is still in the mix as it’s closer to last place (seven points) in 12th than Manchester City is in second to Arsenal in first. But Palace’s schedule through February is rough. It includes two games against Manchester United, a game against Newcastle and games against Brighton & Hove, Brentford and Liverpool. All of those teams are in the top half of the standings.

Liverpool is 10 points outside the top four and is dealing with a ton of injuries at the moment. +175 is a risky bet to make up all that ground and also pass five teams to get into the top four. Tottenham, is just five points outside the top four and its odds will get worse with a loss to Man City on Thursday. Chelsea is tied with Liverpool on points with one more game played and seems to be buying every big-name attacker available on the transfer market. Brighton is just chugging along two points ahead of both Liverpool and Chelsea with a roster that cost the club less than Chelsea paid this week to sign Mykhailo Mudryk.