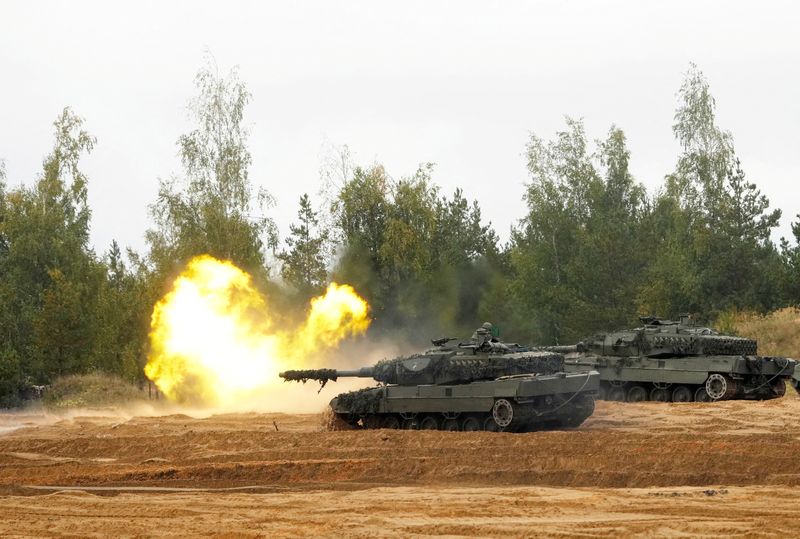 WASHINGTON (Reuters) – When dozens of defense ministers meet at an airbase in Germany on Friday, all eyes will be set on what Berlin is – and is not – willing to provide Ukraine.

Defense leaders from roughly 50 countries and the North Atlantic Treaty Organization will confer at Ramstein Air Base, the latest in a series of meetings since Russia invaded Ukraine nearly 11 months ago.

The focus is expected to be not on what the United States will provide, but on whether Germany will send its Leopard battle tanks to Ukraine or at least approve their transfer from third countries.

“The U.S. is expecting Europeans to take the lead,” said Rachel Rizzo, a fellow at the Atlantic Council. “I would expect the U.S. to be rightly privately pushing the Europeans to dedicate more of their resources.”

Ukraine has relied primarily on Soviet-era T-72 tank variants and the Leopard 2 tank is regarded as one of the West’s best, operated by armies in about 20 countries. The tank weighs more than 60 tons, has a 120mm smoothbore gun and can hit targets at a distance of up to five km.

U.S. Defense Secretary Lloyd Austin had been set to meet German Defense Minister Christine Lambrecht in Berlin before the Ramstein conference, but she resigned from her post on Monday.

The United States has committed roughly $24 billion to help Ukraine defend itself against Russian forces.

U.S. officials, speaking on the condition of anonymity, said President Joe Biden’s administration is next expected to approve Stryker armored vehicles for Kyiv but is not poised to send its own tanks, including the M1 Abrams.

With Republicans taking control of the U.S. House of Representatives in early January, Democrat Biden could be under pressure domestically to ask European allies to do more.

Germany has become one of Ukraine’s top military supporters in response to Russia’s invasion, overcoming a taboo rooted in its bloody 20th century history, but it has not yet agreed to send tanks or allow other countries to send their own German-made tanks.

Some German officials have signaled a softening of their view ahead of the meeting in Ramstein.

Vice Chancellor Robert Habeck, whose Economy Ministry is responsible for approving defense exports, has said that Berlin should not stand in the way of countries that want to send Leopards to Ukraine.

Still, critics say German Chancellor Olaf Scholz and his ruling SPD are too slow, waiting for allies to act first instead of assuming Germany’s responsibility as the Western power closest to Ukraine.

“The ball is in Germany’s court,” a U.S. official said.

Eastern and central European NATO allies rely mainly on the German-built Leopards, which military experts say are the Western tanks best suited to forming the core of a new Ukrainian armored force.

Some Eastern European officials have publicly called on Germany to allow the transfer of Leopard tanks to Ukraine.

Poland’s Prime Minister Mateusz Morawiecki on Monday urged Germany to send Ukraine the weaponry it needed to take the fight to invading Russian soldiers, lacing a speech in Berlin with implicit criticisms of Scholz’s government.

Britain has said that it would send 14 of its main battle tanks along with additional artillery support to Ukraine, a step officials hope will open the door for Germany to make similar moves.

“I know there have been concerns in the German political body that they don’t want to go alone. Well, they’re not alone,” British Defense minister Ben Wallace said on Monday.